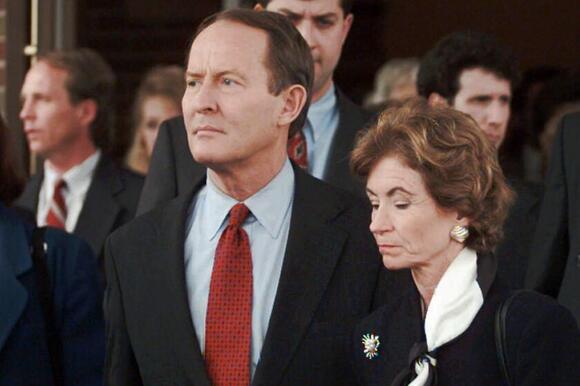 Known as “Honey,” Alexander was surrounded by her family when she died Saturday at her home outside of the Tennessee city of Maryville, her family said in a statement.

She was married for 53 years to Lamar Alexander, a Republican who served as Tennessee's governor from 1979 to 1987, and campaigned for him throughout his political career. He also served as U.S. education secretary under President George H.W. Bush, ran for president and spent three terms in the U.S. Senate before retiring in 2020.

While her husband was governor, Alexander led the statewide Healthy Children Initiative, which sought to provide prenatal health care for children. She was a member of the 1985-1986 Southern Regional Task Force on Infant Mortality, the governor’s task forces on day care and youth alcohol and drug abuse, and the U.S. Health Secretary’s Council on Health Promotion and Disease Prevention, her family's statement said.

She also co-founded Leadership Nashville in 1976 and served on many boards, including the Junior League of Nashville and the Hermitage. She also had been vice-chairman of the Corporation for Public Broadcasting and a board member of Family Service America and the National Archives Foundation, the statement said.

The Honey Alexander Center, located at the Nashville nonprofit Family and Children’s Service, opened in 2019.

“Our dear ‘Honey’ was funny, loving, always caring, unselfish and courageous,” her family said in the statement. “We are so fortunate to have spent our lives with her. We will miss her every day.”

Honey Alexander was born Oct. 12, 1945, in Los Angeles. She was working for U.S. Sen. John Tower of Texas when she met her future husband, who was a staffer for U.S. Sen. Howard Baker Jr. of Tennessee, during a softball game between the two staffs in 1967, her family said. They married in 1969.

In a statement, U.S. Sen. Mitch McConnell, a Kentucky Republican, said Honey Alexander “modeled grace, charity, and public service.” Republican Tennessee Gov. Bill Lee said on Twitter that she “devoted her life to serving others & made a profound impact through her work to support children & families.”

Honey Alexander will be remembered at a private graveside service for family members and at a memorial service to be held later at Christ Church Cathedral in Nashville, the family said.

McKay Coppins, a journalist at The Atlantic, said he was "taken aback" by how often he heard MAGA Republicans say they wish Trump was dead.
MICHIGAN STATE・2 DAYS AGO
Newsweek

On Saturday Haley tweeted: "It's time for a new generation to lead."
SOUTH CAROLINA STATE・1 DAY AGO
Victor

A lawmaker has claimed that George Santos is stepping down from his position because he believes that he is some sort of a "distraction" to House Republicans and the party as a whole.
2 DAYS AGO
Newsweek

DeSantis eyes 2024 from afar as GOP rivals move toward runs

Florida Gov. Ron DeSantis may be months away from publicly declaring his presidential intentions, but his potential rivals aren't holding back
FLORIDA STATE・38 MINUTES AGO