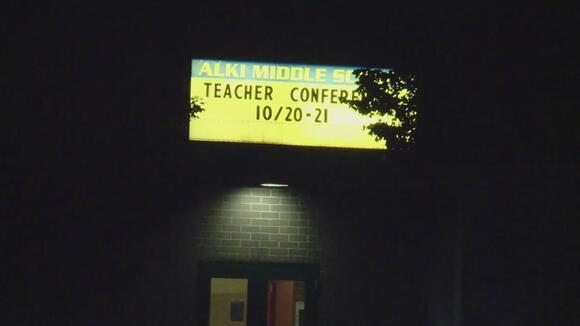 James D. Mattson, 38, was booked in the Clark County Jail and charged with 137 counts of first-degree voyeurism. According to the Alki Middle School directory, there is a “James Mattson” listed as a custodian.

Officials say the initial findings all stemmed from videos taken in the female staff bathrooms at Skyview High School and date as far back as 2013.

“The videos that they saw that led them to this investigation, that was alerted initially, that’s where they thought the concern was, at Alki. This piece that they were able to find, they were able to identify that it came from specific staff restrooms at Skyview,” said Sgt. Chris Skidmore with the Clark County Sheriff’s Office.

A search warrant obtained by KOIN 6 shows Mattson’s live-in girlfriend was the first to report the tapes. According to her, after Mattison left for work as the custodian at Alki Middle School, she walked by the computer room and noticed his computer was open. After going through his files she “found a video that was clearly an underage child getting dressed in a locker room. The child was in their underpants and bra and was putting on pants. The video appeared to be on a hidden camera.”

None of the victims have been identified, but the sheriff’s office says that detectives will work with Vancouver Public Schools to identify those involved.

Brad Boyer, who has an 8th-grade daughter that attends Alki, is glad there was an arrest, but is left to wonder how police will identify and notify victims.

“Do the police have to look at that with school people to find out?” Boyer asked. “Do the kids do it? I don’t really know what the procedures for that, which is a little troubling because then it feels like potentially a violation yet again by other adults.”

As a father of several young children himself, Skidmore said he empathizes with parents’ concerns.

“It’s something that you just don’t expect, especially a school employee, a place where you send your kids and should feel safe about sending your kids there,” he said. “And I’m not familiar with another case where it maybe has the potential to be as big as this one.”

CCSO says that charges could be added as the investigation continues.

One dead, one arrested after fight in Clark County motel room: CCSO

PORTLAND, Ore. (KOIN) — A homicide investigation is underway after a man was declared dead following an altercation in a Clark County motel room, officials said. According to the Clark County Sheriff’s Office, they received a 911 call Friday night about a disturbance in a room at the Sunnyside Motel on Northeast Highway 99. When […]
CLARK COUNTY, WA・1 HOUR AGO
KOIN 6 News

More than 11 years ago, Leonard James Irving was shot to death in Northeast Portland, leaving behind 3 young children. Until Wednesday, no one had been arrested in connection with his death.
PORTLAND, OR・2 HOURS AGO
KOIN 6 News

A Jefferson man was arrested on Jan. 26 for allegedly shooting his neighbor’s dog to death five months ago.
MARION COUNTY, OR・1 DAY AGO
KOIN 6 News

A local business owner is breathing a sigh of relief tonight after he says his stolen RV was recovered.
PORTLAND, OR・17 HOURS AGO
KOIN 6 News

Portland police identified the victim of last week's fatal shooting in the Montavilla neighborhood on Wednesday.
PORTLAND, OR・2 DAYS AGO
KOIN 6 News

A man is facing murder charges in connection to a decades-old cold case in Portland.
PORTLAND, OR・2 DAYS AGO
KOIN 6 News

The man accused of violently biting off an elderly man's ear at a Gresham MAX station was permanently banned from TriMet on Wednesday, marking the second-ever lifetime ban issued.
PORTLAND, OR・2 DAYS AGO
KOIN 6 News

A man arrested for moving over two kilograms of rainbow-colored fentanyl, other narcotics and multiple guns between two Portland motels, is now facing federal charges after he was arrested on Tuesday, the U.S. District Attorney's Office announced.
PORTLAND, OR・2 DAYS AGO
KOIN 6 News

One found dead inside vehicle after North Portland shooting

One person was found dead inside a vehicle after officers responded to reports of shots fired in Portland's Arbor Lodge neighborhood early Thursday morning, Portland Police confirmed to KOIN 6.
PORTLAND, OR・2 DAYS AGO
KOIN 6 News

Four people, including the driver who is accused of driving while impaired, crashed down an embankment and into Boulder Creek Thursday night, the Clark County Sheriff's Office said.
CLARK COUNTY, WA・2 DAYS AGO
KOIN 6 News

Hundreds of protesters, outraged over the death of Tyre Nichols in Memphis, took to the streets of Portland Friday night hours after body cam and surveillance footage was released by investigators.
PORTLAND, OR・14 HOURS AGO
KOIN 6 News

Businesses are fed up with crime and vandalism in Woodstock and taking matters into their own hands.
PORTLAND, OR・2 DAYS AGO
KOIN 6 News

A woman attempting to fuel up her car in Hillsboro nearly three years ago was awarded $1 million by a jury this week after she alleged a gas station worker discriminated against her.
HILLSBORO, OR・2 DAYS AGO
KOIN 6 News

The 21+ Tobacco and Vapor Retail Association of Oregon filed a lawsuit against Multnomah County for banning flavored tobacco and vaping products containing nicotine.
PORTLAND, OR・1 DAY AGO
KOIN 6 News

A 61-year-old man was life-flighted to a local hospital after an ATV accident Wednesday morning, according to Cowlitz 2 Fire and Rescue.
VANCOUVER, WA・2 DAYS AGO
KOIN 6 News

One of downtown Portland’s worst eyesores, O’Bryant Square at Southwest Park Avenue and Harvey Milk Street, is about to get a makeover.
PORTLAND, OR・20 HOURS AGO