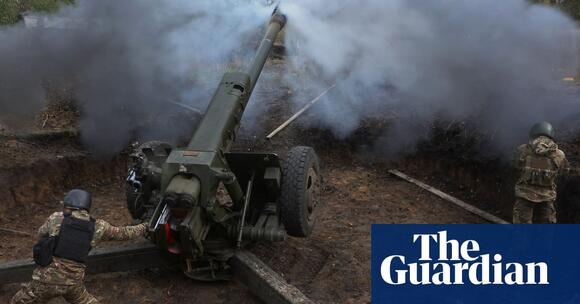 The Russian president, Vladimir Putin, has appeared to concede the severity of the Kremlin’s recent military reversals in Ukraine, insisting Russia would “stabilise” the situation in four Ukrainian regions it illegally claimed as its own territory last week.

Russia has suffered significant losses in two of the four regions since Friday, when Putin signed treaties to incorporate them into Russia by force, with Russian officials saying their forces were “regrouping”.

“We are working on the assumption that the situation in the new territories will stabilise,” Putin told Russian teachers during a televised video call.

With Ukraine pushing its advance in the east and south, Russian troops have been retreating under pressure on both fronts, confronted by fast moving and agile Ukrainian forces supplied with advanced western-supplied artillery systems.

As Russian troops have retreated, they have left behind smashed towns once under occupation and, in places, mass burial sites and evidence of torture chambers.

In the town of Lyman, which was retaken by Ukrainian forces on Sunday, more than 50 graves have been found, some marked with names, others with numbers, the Kyiv-based outlet Hromadske reported on Wednesday.

Putin’s comments comes amid increasingly gloomy commentary from Russian war correspondents and military bloggers over the severity of the situation that has seen a large-scale withdrawal from the Kharkiv region, the loss of the strategic town of Lyman on Friday and Ukrainian advances in the Kherson region.

The scale of the recent defeats was underlined by a report by the BBC’s Russian service that said an elite Russian military intelligence unit may have lost up to three-quarters of its reconnaissance manpower in Ukraine.

On Wednesday, Ukraine’s southern command said it had extended its area of control by six to 12 miles in the Kherson region and the president, Volodymyr Zelenskiy, confirmed the recapture of a series of villages.

The territory recaptured is to the south of the city of Kryvyi Rih in the direction of Nova Kakhovka as well as west along the north bank of the Dnipro river towards Kherson.

“The Ukrainian army is making quite fast and powerful progress in the south of our country,” said Zelenskiy in his nightly address on Tuesday. “Dozens of settlements have already been exempted from the Russian pseudo-referendum this week alone … and this is far from a complete list.” He named eight villages in the Kherson region.

Some Russian propagandists and officials blamed the losses on Nato.

“We are regrouping [our forces] along the front, which means that we can gather strength and strike back,” Kirill Stremousov, the Moscow-appointed deputy head of Kherson region, told the RIA Novosti news agency. Stremousov said it was “impossible” for them to enter Kherson city.

A Russian war reporter for state TV, Roman Saponkov, wrote to his Telegram followers that Russia was losing in Kherson. “Friends, I know you’re waiting for me to comment on the situation. But I really don’t know what to say to you. The retreat from the north on the right bank is a disaster.”

"Friends, I know you're waiting for me to comment on the situation. But I really don't know what to say to you. The retreat from the north on the right bank is a disaster" pic.twitter.com/xMGzzb9f5M

The losses came as Putin ordered on Wednesday his government to take control of the Zaporizhzhia nuclear power plant, Europe’s largest, but was met with the head of Ukraine’s state nuclear energy company saying he was taking charge and urging workers not to sign any documents with Russia.

About 15,000 of Russia’s best-trained troops are struggling to fight off Ukrainians on the western bank of occupied Kherson, despite movements of Russian troops from the eastern front to the south, which has thinned Russian forces elsewhere.

According to Jack Watling, a senior analyst at the Royal United Services Institute, Russian troops around Kherson have retreated to their second line of defence to shorten their frontline.

“There’s no evidence of surrender or collapse [of Russian forces] … like we saw in Kharkiv region,” said Watling, noting the political importance for Russia of holding on to Kherson city, the only regional centre it has managed to acquire since February.

But if Ukraine’s forces manage to break through Russia’s second line of defence, they will be able to cut the Russian supply lines with a wider range of cheaper artillery and trap them on the western bank of Kherson, he added.

“At the moment, the bridges are being hit by Himars [rockets], which are scarce and very expensive … [if they advance further] they can afford to open up against more incidental targets,” said Watling of the bridges supplying Russian forces on Kherson’s west bank.

Phillips O’Brien, a professor of strategic studies at St Andrews University, added that Ukraine’s recent progress had been a product of a process, not a turning point.

“For months now, Russia has been getting weaker, it has been bleeding its army on the field, it’s been losing a huge amount of equipment. On the other hand, the Ukrainians have been getting stronger; they have better-trained forces and better military equipment.”

He added: “This hasn’t happened overnight, this has been the way the war has been trending but now we can say it reached the tipping point in September.”

In the short term there is nothing Russia can do because they waited too long to mobilise, O’Brien said.

Russia, meanwhile, has continued to attack behind Ukraine’s frontlines, a mixture of military and civilian targets. On Wednesday morning, it launched a significant drone attack on Bila Tserkva in Kyiv region and fired rockets into Zaporizhzhia and Dnipro region.

But O’Brien doubted Russia had enough quality missiles to alter the situation behind the frontlines to affect the battlefield.

“It’s more of a question of, can they just hold on and hope that they can get a trained and re-equipped force back in the spring, but even then there’s a question about whether they can do that,” said O’Brien. He said Russia would need to produce more equipment and properly train troops but its system of mobilisation appeared “chaotic”.

Konrad Muzyka, an independent military analyst, said he had initially thought the war may last for years, but after the Kharkiv region, it could be much less.

“It does not look good for [Russia] … They are not able to defend properly, let alone conduct any offensives,” said Muzyka. “This Russian leadership thinks with [new] reservists they will be able to stop Ukrainian advances, but I’m not sure. The truth is, we don’t know how big an impact it will [have] on the frontline.”

Russia will not win any strongholds. they will just lose another 300,000 unqualified soldiers....who will more than likely due of malnutrition and the weather.

Putin might be able to stay on as the president if he pulls his troops now. He won't. Insisted he will use nuclear weapons and destroy Ukraine. Nobody will want to live there.

The Kremlin thought it would sweep across Ukraine and take Kyiv in a matter of days. Now, more than nine months into its disastrous war with Ukraine, the new Russian strategy of targeting the infrastructure that brings light, heat and water into millions of Ukrainian homes has revealed Russia’s own weakness and its desperation in the face of a defiant Ukrainian resistance.
1 DAY AGO
TheDailyBeast

Russian Foreign Minister Sergei Lavrov made a surprise admission at his annual news conference in Moscow on Thursday.
2 DAYS AGO
Business Insider

Kyiv caught the world off guard with its fast-paced counteroffensive this fall, including an elite Russian unit in a key city in eastern Ukraine.
2 DAYS AGO
RadarOnline

Vladimir Putin’s alleged battle with cancer has been called back into question after the Russian leader fell down a set of stairs and “soiled himself” earlier this week, RadarOnline.com has learned.The surprising incident reportedly took place on Wednesday night at the 70-year-old leader’s residence in Moscow.According to General SVR, an anti-Putin Telegram channel allegedly run by a former Kremlin spy, Putin fell five steps before landing on his tailbone.Even more surprising is the channel’s claim that Putin “involuntarily defecated” himself as a result of the “cancer affecting his stomach and bowels.”“Three bodyguards helped the president get to the nearest couch...
17 HOURS AGO
The Guardian

In Buckingham Palace and outside it, we know what it means when people ask ‘where are you from’

When Susan Hussey asked that of a black British charity boss, she echoed the words of many who alienate people of colour, says writer Kohinoor Sahota
2 DAYS AGO
The Guardian

If ever there were a love story for the Instagram age, the Duke and Duchess of Sussex’s beautifully chronicled romance is the one. Here they are, in a series of pictures from their private album released to promote next week’s six-part Netflix documentary on their relationship, sitting atop a Jeep on what looks like their first holiday together. Here he is, serenading her on the guitar. Then the two of them, impossibly glamorous, spinning joyously around the dancefloor at their wedding; and her on a beach, pregnant and delightedly cradling the bump, against an almost too perfect sunset.
23 HOURS AGO
The Guardian

Fleetwood Mac were Brit-rock stalwarts when, in 1974, they hit on the idea of pepping up their lineup. They invited a folky Californian, Lindsey Buckingham, to join, but he refused to come without his girlfriend, Stevie Nicks. The band agreed, on one condition: their sole female member, Christine McVie, had to feel comfortable with Nicks.
2 DAYS AGO
The Guardian

Met pays out to black brothers searched and handcuffed outside home

The Metropolitan police has settled a complaint by black brothers who were stopped, searched and handcuffed outside their family home. Nicholas Peart, 24, and Leon Peart, 20, both black, are Christians who regularly attend church and say they have never smoked tobacco let alone taken drugs. They told of their feelings of trauma and humiliation after about 20 minutes in handcuffs when arrested outside in Chingford, east London.
2 DAYS AGO
The Guardian

My wife says pursuing my hobby will end our marriage. Let’s call it, hypothetically, motorcycling

It’s hard to imagine what hobby your wife could have such strong feelings about, writes advice columnist Eleanor Gordon-Smith. To solve this you’ll need to deal in specifics
1 DAY AGO
The Guardian

White House officials confirmed Friday that there are currently no plans for President Biden to talk with Russian President Vladimir Putin regarding an end to the war in Ukraine, Reuters reported.  Biden himself had said just a day prior that while he would be open to meeting with Putin to try and find common ground, the conditions for such a meeting were currently not on the table. This was reiterated by national security spokesperson John Kirby, who said, "We're just not at a point now where talks seem to be a fruitful avenue to approach right now," per Reuters.  Kirby further told reporters that Biden's overall position on...
31 MINUTES AGO
The Guardian

It was a Sunday, and I was out and about in west Croydon. I was 13. A young stranger called out to me, “Hey! What are you doing now? Why don’t you come in, we are having an event now. There will be singing and dancing, it’s really fun, come in!”
1 DAY AGO
The Guardian

Black-clad women in Iran’s Sistan-Baluchistan province have joined nationwide protests on Friday sparked by the death of Mahsa Amini, in what a rights group called a rare move in the staunchly conservative region. Videos online showed dozens of women on the streets of the provincial capital, Zahedan, holding banners...
22 HOURS AGO