Russians fleeing mobilisation will not automatically get French visas - minister 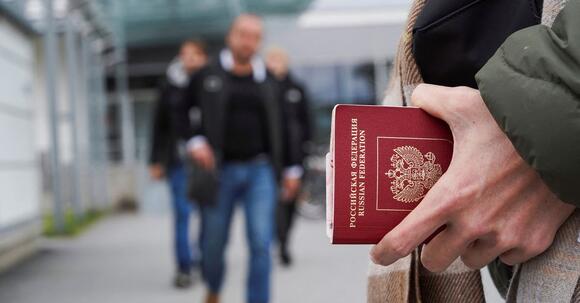 PARIS, Oct 5 (Reuters) - French Junior Minister for European Affairs Laurence Boone said on Wednesday that Russians fleeing their country to avoid being mobilised in the Russian army would not automatically get visas to remain in France, but that their situation and any security risks would be considered.

"We have limited conditions under which visas can be given. We will make sure dissident journalists, people who fight the regime, artists and students can still come here, and we will issue visas on a case-by-case basis, taking into account the security risks," she said in an interview with franceinfo radio.

Asked whether all Russian army deserters would be welcomed on European soil, she said each case would be looked at individually and that the procedure to get a visa for the Schengen space would be extended to 40 days from the usual 15 in order to conduct an investigation into the person who requests a visa or political asylum.

"We want to preserve access to political asylum in Europe to people who really need it and to avoid security risks," she said, adding that several countries much closer to Russia want to completely close their borders to Russians wanting to leave their country.

Remember, more than 80% of the Russian population supported Putin in his invasion. Be careful of allowing them into your country. Word to the wise.

France should deny the majority of these visas. The last thing they want is a bunch of Russians infiltrating their country. Most of these people supported Putin as long as they didn't have to fight. Send them back home.

Russian young people must get Putin out of office and start rebuilding Russia into a better friendlier nation every everybody wants to visit. Russian people deserves better way of life and more freedom.

Dec 1 (Reuters) - Russian forces tried to advance in eastern Ukraine and trained tank, mortar and artillery fire on Kherson in the south, the Ukrainian military said, as Western allies sought to buttress Ukraine and its neighbours against Moscow.
GEORGIA STATE・3 DAYS AGO
Newsweek

Nov 30 (Reuters) - Russian Foreign Minister Sergei Lavrov said on Wednesday it was vital to avoid any kind of military confrontation between nuclear powers, even if it only involved conventional weapons, the TASS news agency reported.
3 DAYS AGO
TheDailyBeast

SAN SALVADOR, Dec 3 (Reuters) - El Salvador's President Nayib Bukele announced Saturday the deployment of 10,000 security forces to a suburb of San Salvador known to be a stronghold for gangs.
1 HOUR AGO
Reuters

BEIJING, Dec 1 (Reuters) - China is softening its tone on the severity of COVID-19 and easing some coronavirus restrictions even as its daily case toll hovers near records, after anger over the world's toughest curbs morphed into protests across the country.
2 DAYS AGO
Reuters

Dec 4 (Reuters) - Islamic State claimed responsibility for an attack on Pakistan's embassy in the Afghan capital Kabul on Friday, a statement carried by one of the militant group's affiliated channels on Telegram said on Sunday.
1 HOUR AGO
Reuters

WASHINGTON (Reuters) - A U.S. government committee on Thursday urged the Federal Communications Commission (FCC) to deny an application to connect Cuba to the United States through a new undersea cable landing station to handle internet, voice and data traffic.
WASHINGTON STATE・3 DAYS AGO