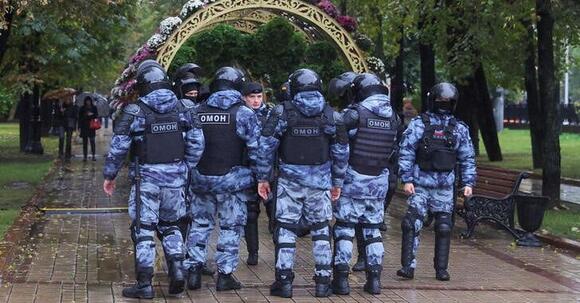 Police hauled Gilman off a train in Voronezh in January, while he was travelling from the southern city of Sochi to Moscow, after complaints from fellow passengers about his behaviour, the agencies reported, citing the prosecution.

While in custody, Gilman was accused of kicking out at a police officer, leaving him with bruises.

Gilman, whose lawyers told the TASS news agency he had come to Russia to study and obtain citizenship, told the court in Voronezh that he did not remember the incident but had "apologised to Russia" and to the police officer.

After being found guilty, Gilman said the four-and-a-half year sentence requested by the prosecution was too strict.

Gilman's lawyer Valeriy Ivannikov told reporters he intended to appeal and would ask the United States to seek a prisoner exchange.

U.S. State Department deputy spokesperson Vedant Patel said Washington was aware of the decision but said he could not give further details citing privacy considerations.

Russia has sentenced several U.S. citizens to lengthy prison terms in recent years, though Gilman's case has attracted less attention than most.

WNBA basketball star Brittney Griner was sentenced in August to nine years in prison after being found in possession of cannabis oil vape cartridges.

Paul Whelan, another ex-marine who also holds Canadian, Irish and British citizenship, is serving 16 years in prison on espionage charges, which he denies.

But in April, former marine Trevor Reed, who was serving nine years after being found guilty of violence against a police officer, was freed in a prisoner exchange.

Russian officials have said they are in talks with Washington about possible new prisoner exchanges. Media reports say they could involve convicted arms dealer Viktor Bout, serving a 25-year sentence in the United States, being released back to Russia.

Reporting by Reuters; Editing by Kevin Liffey and Alistair Bell

if your an American and want to visit or move to russia,then you are a complete moron. their are plenty of Americans in Russian prisons that will tell you the same exact thing. just look at how it ended for them

Give back Viktor Bout, serving a 25-year sentence in the United States. We don't need him taking up space in America. Bring back all Americans from Russian prisons. And call it a day.

he wanted Russian residence but now wants US to trade for him ?! what am I missing ? wtf

LONDON, Nov 29 (Reuters) - Russia accused the United States on Tuesday of toxic anti-Russian behaviour that it said had prompted it to pull out of nuclear arms talks with U.S. officials in Cairo this week.
WASHINGTON STATE・14 HOURS AGO
The Independent

A Danish reporter covering the World Cup in Qatar said he was detained by police after filming Iranians allegedly being attacked by supporters of the country’s regime.Rasmus Tantholdt, of Danish network TV2, was attending Iran’s final group game against the US on Tuesday when he filmed Iranian fans clashing over the ongoing women’s rights protests in the country at the Al Thumama Stadium in Doha.Some football fans who showed up in T-shirts with “Women, Life, Freedom” written on them as a message for support for the ongoing protests, were allegedly beaten up by a group of men after Iran lost...
23 MINUTES AGO
Reuters

Exclusive-U.S., Russia have used 'deconfliction' line once so far during Ukraine war -source

WASHINGTON, Nov 28 (Reuters) - A communications line created between the militaries of the United States and Russia at the start of Moscow's war against Ukraine has been used only once so far, a U.S. official told Reuters.
19 HOURS AGO
Reuters

BUCHAREST, Nov 29 (Reuters) - NATO allies on Tuesday said they would help Ukraine repair energy infrastructure heavily damaged by Moscow's shelling, in what the alliance's head said was Russia using the cold weather as "a weapon of war".
13 HOURS AGO
Reuters

LVIV/KYIV, Nov 27 (Reuters) - Ukrainian President Volodymyr Zelenskiy said on Sunday that Russia would surely launch new missile attacks on his country, and warned defence forces and citizens to be prepared to withstand a new week of strain on the power grid.
2 DAYS AGO
Reuters

Family concerned about whereabouts of Whelan, American jailed in Russia

WASHINGTON, Nov 30 (Reuters) - The brother of Paul Whelan, an American jailed in Russia, said on Tuesday his family is concerned about his whereabouts after not hearing from him for days and unclear messages from the prison staff that he was moved to the prison hospital.
WASHINGTON STATE・2 HOURS AGO
Reuters

WASHINGTON (Reuters) - The U.S. Senate passed a bill on Tuesday that would protect federal recognition of same-sex marriage, a measure taken up in response to worries the Supreme Court could overturn a 2015 decision that legalized it nationwide.
WASHINGTON STATE・28 MINUTES AGO
Reuters

VIZHINJAM, India, Nov 29 (Reuters) - A Hindu group close to India's ruling party will on Wednesday march in support of a $900 million port project by the Adani Group which has been stalled by Christian protesters, as tensions rise after clashes in which 80 people were injured.
7 HOURS AGO
Reuters

MOSCOW, Nov 27 (Reuters) - Kremlin spokesman Dmitry Peskov on Sunday said attempts to break up a Russian-led security alliance had always existed and would continue to do so, but insisted that the alliance remained in high demand following criticism this week from Armenia.
2 DAYS AGO
Reuters

SYDNEY, Nov 30 (Reuters) - Australian Prime Minister Anthony Albanese has raised the issue of the continued detention of Julian Assange in meetings with United States officials and seeks to bring the matter to a close, he said on Wednesday.
2 HOURS AGO
Reuters

SEOUL, Nov 29 (Reuters) - South Korean President Yoon Suk-yeol warned of an unprecedented joint response with allies if North Korea goes ahead with a nuclear test, and urged China to help dissuade the North from pursuing banned development of nuclear weapons and missiles.
WASHINGTON STATE・14 HOURS AGO
The Independent

Two months into an investigation of alleged passport forgery involving the former security chief for Uruguay's president, questions are expanding after a newspaper's reports that prosecutors have also found evidence of political spying and blackmail against opposition politicians.Uruguay’s secretary of the presidency, Álvaro Delgado, and the deputy secretary, Rodrigo Ferrés, testified Tuesday to prosecutors in the forgery investigation of Alejandro Astesiano, who headed security for President Luis Lacalle Pou.That session came after 10 days of stories in La Diaria outlining details on the purported espionage that the newspaper says are contained in a cellphone and other digital devices obtained...
FLORIDA STATE・33 MINUTES AGO
Reuters

Nov 29 (Reuters) - The United States and NATO allies promised more arms for Kyiv and equipment to help restore Ukrainian power and heat knocked out by Russian missile and drone strikes, as air raid sirens blared across Ukraine for the first time this week.
11 HOURS AGO
Reuters

KYIV, Nov 29 (Reuters) - Ukraine was still struggling to restore full power on Tuesday, nearly a week after a wave of Russian missile strikes that damaged energy facilities across the country.
20 HOURS AGO