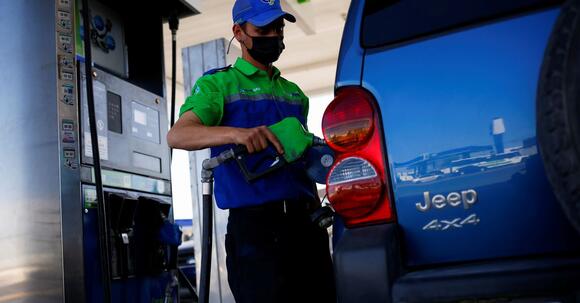 Oct 4 (Reuters) - The largest U.S. oil trade groups said on Tuesday that they have "significant concerns" that the Biden administration is considering limiting fuel exports to lower consumer prices and urged top officials to take the option off the table, according to a letter seen by Reuters.

The joint letter from the American Petroleum Institute and the American Fuel and Petrochemical Manufactures to Energy Secretary Jennifer Granholm represents the latest volley in a clash between the oil industry and the Biden administration over high energy prices.

President Joe Biden has made battling an energy-led surge in consumer prices a top priority and has repeatedly chided oil companies for earning bumper profits at a time of record gasoline prices.

Biden has repeated those accusations in recent weeks as gasoline prices began to tick back up leading into the November midterm elections, after weeks of declines.

The idea of limiting U.S. fuel exports to keep domestic energy prices in check was largely dismissed as unlikely by the oil industry when it first came up months ago, but the letter on Tuesday shows the industry is becoming increasingly concerned the administration could move ahead with it.

In August, Granholm sent a letter to U.S. refining companies urging them to focus more on building domestic inventories of gasoline and diesel, and less on exports. She warned that if they did not, the administration would need to consider "emergency measures," but offered no specifics.

The groups said in their letter that recent discussions raised "significant concerns" that the administration may pursue a ban or limit on fuel exports.

"Banning or limiting the export of refined products would likely decrease inventory levels, reduce domestic refining capacity, put upward pressure on consumer fuel prices, and alienate U.S. allies during a time of war. For these reasons, we urge the Biden administration to take this option off the table," the groups said, referring to Russia's war in Ukraine.

In response to the letter, an Energy Department spokesperson said the administration is "going to continue to look at all tools available to protect Americans and uphold our commitments to our allies."

The United States has approximately 18 million barrels per day (bpd) of refining capacity and averages about 3.5 million bpd of fuel exports, with Latin America a major destination.

Wait a minute... Biden said he can't control gas prices... So... He takes ZERO responsibility for his attack on the petroleum industry his first day in office, which caused them to skyrocket in the first place, but now he takes credit for them dropping .50¢ a gallon, and is trying to control them by shackling exports, AFTER he sold strategic reserve oil to China!

If US oil production is high enough that we have excess oil to ship to other countries then fine but if we have a shortage in this country then the US must come first.

Government - particularly THIS government needs to stay out of these companies business. They've proven they have zero intelligence in managing money.

Vice President Kamala Harris dressed to impress at the first state dinner held by President Joe Biden and First Lady Jill Biden since his inauguration. The Vice President arrived at the White House on December 1 for the star-studded dinner wearing a one-shouldered black dress. The top portion of the gown featured sparkles that twinkled in the light.
1 DAY AGO
Reuters

FRANKFURT, Germany — (AP) — The Saudi-led OPEC oil cartel and allied producing countries, including Russia, are expected to decide how much oil to supply to the global economy amid weakening demand in China and uncertainty about the impact of new Western sanctions against Russia that could take significant amounts of oil off the market.
44 MINUTES AGO
RadarOnline

"I don't expect Manchin or Sinema to have much influence to be quite honest," one expert told Newsweek.
ARIZONA STATE・1 DAY AGO
Reuters

Dec 1 (Reuters) - Ukraine's military said Russia had pulled some troops from towns on the opposite bank of the Dnipro River from Kherson city, the first official Ukrainian report of a Russian withdrawal on what is now the main front line in the south..
WASHINGTON STATE・1 HOUR AGO
Fortune

‘This is blood money, pure and simple’: A top aide to Ukraine’s President Zelensky accuses BP of war profiteering with stake in Russian oil firm

A major energy company that pledged to sell its stake in Russia has yet to do so, and a top Ukrainian official just accused it of pocketing millions from the war. British Petroleum is one of the world’s largest oil and gas companies, so when it announced in February that it would sell its 19.75% stake in Russian energy company Rosneft in the wake of Vladimir Putin’s invasion of Ukraine, it held weight.
1 DAY AGO
Reuters

Nov 30 (Reuters) - Federal Reserve Chair Jerome Powell on Wednesday said it was time to slow the pace of coming interest rate hikes while also signaling a protracted economic adjustment to a world where borrowing costs will remain high, inflation comes down slowly and the United States remains chronically short of workers.
3 DAYS AGO
Business Insider

Kyiv caught the world off guard with its fast-paced counteroffensive this fall, including an elite Russian unit in a key city in eastern Ukraine.
3 DAYS AGO
Newsweek

Dec 3 (Reuters) - Russia "will not accept" a price cap on its oil and is analysing how to respond, the Kremlin said in comments reported on Saturday, in response to a deal by Western powers aimed at limiting a key source of funding for its war in Ukraine.
1 HOUR AGO
Reuters

WASHINGTON, Nov 30 (Reuters) - The Biden administration will give Native American tribes more say in managing federal and tribal lands as part of a plan that includes assistance for tribes whose land has been harmed by climate change, the White House said on Wednesday.
NEVADA STATE・3 DAYS AGO
Reuters

LONDON (Reuters) -Britain’s government is looking at bringing in the military to help keep public services running if key workers, including in the state-run National Health Service, take strike action, the chairman of the governing Conservative Party said on Sunday.
37 MINUTES AGO
Reuters

NEW YORK, Nov 30 (Reuters) - Prosecutors on Wednesday moved to confiscate $5.4 million from a U.S. bank account belonging to Russian businessman Konstantin Malofeyev, who Washington has accused of financing separatists in eastern Ukraine and Crimea and imposed sanctions on him.
TEXAS STATE・3 DAYS AGO
WEKU

The war in Ukraine is set to slow this winter, according to US intelligence

The head of U.S. intelligence says fighting in Russia's war in Ukraine is running at a "reduced tempo" and suggests Ukrainian forces could have brighter prospects in coming months.
CALIFORNIA STATE・41 MINUTES AGO
Reuters

NEW YORK, Nov 30 (Reuters) - The Federal Reserve could scale back the pace of its interest rate hikes as soon as December, Fed Chair Jerome Powell said on Wednesday, while cautioning the fight against inflation was far from over and that key questions remain unanswered, including how high rates will ultimately need to rise and for how long.
INDIANA STATE・3 DAYS AGO
Reuters

Dec 4 (Reuters) - Air pollution in Bangladesh is robbing the South Asian nation of economic growth as well as causing premature death and illness, the World Bank said on Sunday.
36 MINUTES AGO