UK warns Russia of consequences for any nuclear weapon use 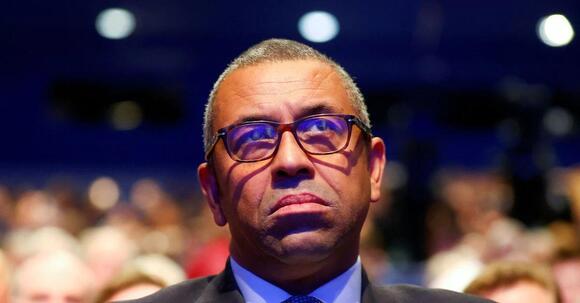 BIRMINGHAM, England, Oct 4 (Reuters) - Britain's foreign minister James Cleverly on Tuesday said Russian President Vladimir Putin's sequence of strategic errors must stop and that any use of nuclear weapons would lead to consequences.

Putin has escalated its seven-month war in Ukraine with a military mobilisation and warnings of nuclear weapons use. read more

Asked how Britain would respond to the use of tactical nuclear weapons by Russia, Cleverly told a fringe event at the Conservative Party conference that he couldn't go into detail but there would be a response.

"It would inevitably be the case that the use of nuclear weapons by any country anywhere in the world would not go without a response," he said.

"I'm not going to discuss the nature or the threshold."

"We need to make it very clear that his sequence of strategic errors has got to stop," he said. "We will continue to support Ukrainians in the defence of their homeland, and stand up for the international rules and norms".

sad how putin can't expect he has been defeated by a army smaller than his ! the big difference is putin went against people that were willing to give there lives for Ukraine 🇺🇦, Russian soldiers did what they were told they know they are all in the wrong !

blah blah blah,puntin and his rhetoric of nuclear this and nuclear that.Somebody needs to spank him and make him stand in the corner.

everyone sending warning ⚠️ but no moves sounds like a bunch of garbage. US VS CHINA N RUSSIA sound like we have them spooked .

Vladimir Putin’s alleged battle with cancer has been called back into question after the Russian leader fell down a set of stairs and “soiled himself” earlier this week, RadarOnline.com has learned.The surprising incident reportedly took place on Wednesday night at the 70-year-old leader’s residence in Moscow.According to General SVR, an anti-Putin Telegram channel allegedly run by a former Kremlin spy, Putin fell five steps before landing on his tailbone.Even more surprising is the channel’s claim that Putin “involuntarily defecated” himself as a result of the “cancer affecting his stomach and bowels.”“Three bodyguards helped the president get to the nearest couch...
1 DAY AGO
Newsweek

Russian Foreign Minister Sergei Lavrov made a surprise admission at his annual news conference in Moscow on Thursday.
2 DAYS AGO
TheDailyBeast

Nov 30 (Reuters) - Russian Foreign Minister Sergei Lavrov said on Wednesday it was vital to avoid any kind of military confrontation between nuclear powers, even if it only involved conventional weapons, the TASS news agency reported.
3 DAYS AGO
coinchapter.com

MADRID/KYIV, Nov 30 (Reuters) - A security officer at Ukraine's embassy in Madrid was injured when he opened a letter bomb addressed to the ambassador on Wednesday, prompting Kyiv to order greater security at all its representative offices abroad.
3 DAYS AGO
Boston 25 News WFXT

HONG KONG — (AP) — China on Sunday reported two additional deaths from COVID-19 as some cities move cautiously to ease anti-pandemic restrictions amid increasingly vocal public frustration over the measures. The National Health Commission said one death was reported each in the provinces of Shandong and Sichuan....
28 MINUTES AGO
Reuters

BEIJING, Dec 1 (Reuters) - China is softening its tone on the severity of COVID-19 and easing some coronavirus restrictions even as its daily case toll hovers near records, after anger over the world's toughest curbs morphed into protests across the country.
3 DAYS AGO