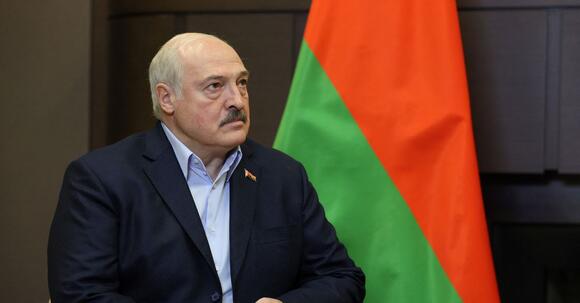 Lukashenko allowed his close ally Russia in February to use Belarus as a staging post for its invasion of Ukraine. However, he has said Belarus is not a party to the conflict and that its own forces are not involved.

In comments carried by the state news agency BelTA, Lukashenko said the Ukrainian unit brought up to the border had blocked roads and was setting up checkpoints and firing positions.

"In a word, [Ukraine] has not only barricaded itself, but built a wall. Constantly conducting optical, radio-electronic and radio-technical reconnaissance of our territory, troops and objects," Lukashenko said.

"Often with their drones violating the line of the state border. And at the same time, they worry and worry: 'Oh, don't let Belarus enter the war'. And there are constant provocations at the border."

Ukrainian officials did not immediately respond to a request for comment.

Lukashenko said his country was involved in the conflict only to prevent it spreading into Belarus and to "prevent an attack on Belarus under the guise of a special military operation from Poland, Lithuania and Latvia".

"As I have said, nobody will shoot the Russians in the back from the territory of Belarus," he said.

Belarus's three western neighbours are all part of the NATO transatlantic alliance, which is helping Ukraine to defend itself against Russia with weapons and intelligence but says it will not take a direct part in the conflict.

Lushesheko already entered the war on the side of Russia. However his own military won’t protect him. He better tread lightly w his threats. He let Russia use Belarusian land to attack Ukraine. He can’t cry now

Of course he does. Because that’s what little man Putin told him to say. If you look closely to can see the puppet strings attached to him. Lol

when you let Russians stage for an invasion from. your country, they have every right to secure the border they share with you.

Vladimir Putin’s alleged battle with cancer has been called back into question after the Russian leader fell down a set of stairs and “soiled himself” earlier this week, RadarOnline.com has learned.The surprising incident reportedly took place on Wednesday night at the 70-year-old leader’s residence in Moscow.According to General SVR, an anti-Putin Telegram channel allegedly run by a former Kremlin spy, Putin fell five steps before landing on his tailbone.Even more surprising is the channel’s claim that Putin “involuntarily defecated” himself as a result of the “cancer affecting his stomach and bowels.”“Three bodyguards helped the president get to the nearest couch...
1 DAY AGO
Reuters

Dec 1 (Reuters) - Russian forces tried to advance in eastern Ukraine and trained tank, mortar and artillery fire on Kherson in the south, the Ukrainian military said, as Western allies sought to buttress Ukraine and its neighbours against Moscow.
GEORGIA STATE・3 DAYS AGO
Newsweek

Nov 30 (Reuters) - Russia said its forces had edged forward in eastern Ukraine and Kyiv said Moscow was "planning something" in the south, while NATO sought to shore up other countries that fear destabilisation from Moscow.
3 DAYS AGO
TheDailyBeast

Dec 4 (Reuters) - Islamic State claimed responsibility for an attack on Pakistan's embassy in the Afghan capital Kabul on Friday, a statement carried by one of the militant group's affiliated channels on Telegram said on Sunday.
1 HOUR AGO
Reuters

BRASILIA, Nov 30 (Reuters) - Brazilian President-elect Luiz Inacio Lula da Silva's transition team has held meetings with the soy industry to discuss a new pact to stop deforestation in the Cerrado savanna, modeled on an agreement for the Amazon, a Lula adviser said on Wednesday.
3 DAYS AGO
Reuters

BEIJING, Dec 1 (Reuters) - China is softening its tone on the severity of COVID-19 and easing some coronavirus restrictions even as its daily case toll hovers near records, after anger over the world's toughest curbs morphed into protests across the country.
2 DAYS AGO
Reuters