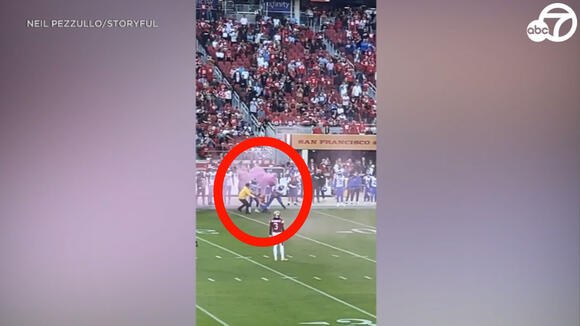 Bobby Wagner delivered one of the biggest hits on a person who got onto the field. The Rams linebacker flattened a protester who ran on the field with a device emitting pink smoke late in the second quarter of Los Angeles' game against the San Francisco 49ers on Monday night. "I just saw someone running on the field," Wagner said. "It looked like he wasn't supposed to be on the field so I saw security was having a problem so I helped them out." With less than a minute left in the first half, the person got onto the field and ran across while being chased by security as the pink smoke filled the field. As the person ran toward the Rams sideline, linebacker Takkarist McKinley came toward him before Wagner came off the sideline and laid him out with a big hit. "I saw Bobby Wagner taking somebody out," 49ers coach Kyle Shanahan said. "I thought that was kind of cool to see." The protester was taken off the field by security and the game quickly resumed. Earlier in the game, another person tried to get onto the field with a similar device, but was stopped by security.

Former NFL quarterback Michael Vick will be featured in an eight-part documentary series that details the evolution of the Black quarterback in America. Variety broke this exciting news on Wednesday. As part of this docuseries, Vick will speak with celebrities, coaches, quarterbacks, journalists and other cultural figures to get their...
1 DAY AGO
Sports Illustrated

The coach joked about his quarterback’s admission this week.
KANSAS CITY, MO・21 MINUTES AGO
ABC7

Ohio State's loss to Michigan on Saturday not only took them out of the Big Ten Championship Game, it dropped them out of the top four for the College Football Playoff for the first time this season. But ESPN's Paul Finebaum believes there's still a path to the Buckeyes making the postseason.
COLUMBUS, OH・2 DAYS AGO
USA TODAY Sports Media Group

Stock up, stock down following the Bills' win over the Patriots

Following the Buffalo Bills’ 24-10 win over the New England Patriots in Week 13, here is Bills Wire’s latest stock report:. Three wins away from home in 12 days for the Bills. That’s enough alone to give kudos to McDermott. The cherry on top is how much better Buffalo played than New England in that third and final victory.
BUFFALO, NY・29 MINUTES AGO