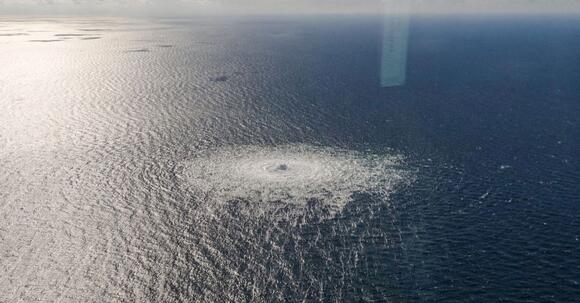 STOCKHOLM/OSLO, Oct 3 (Reuters) - Sweden sent a diving vessel on Monday to the site of Russian gas pipelines in the Baltic Sea that ruptured last week following blasts in the area, to probe an incident that has added new tension to Europe's energy crisis.

Europe is investigating what caused three pipelines in the Nord Stream network to burst in an act of suspected sabotage near Swedish and Danish waters that Moscow quickly sought to pin on the West, suggesting the United States stood to gain.

"The coast guard is responsible for the mission, but we are supporting them with units," a spokesperson for the Swedish navy, Jimmie Adamsson, told Reuters. "The only one we are naming is HMS Belos, which is a submarine rescue and diving vessel."

The Swedish coast guard said Nord Stream 1 had stopped leaking, but an overflight suggested gas was still draining out of Nord Stream 2 and bubbling to the surface over a 30 metre (32 yard) radius.

The Kremlin doubled down on allegations that the West was to blame for the ruptures on Monday, saying that the United States was able to increase sales and prices of its liquefied natural gas (LNG) as a result.

Washington has strongly denied any involvement. European countries suspect sabotage, but have declined to say who could be behind it.

Kremlin-controlled Gazprom (GAZP.MM) also said flows could resume at the last remaining intact pipeline in the Nord Stream 2 network, a suggestion likely to be rebuffed given Europe blocked Nord Stream 2 on the eve of Russia's invasion of Ukraine in February.

"If a decision is made to start deliveries through Nord Stream 2's line B, natural gas will be pumped into the pipeline after the integrity of the system has been checked and verified by supervisory authorities," Gazprom said.

The suggestion follows remarks by Russia's deputy prime minister on Sunday that the Nord Stream network could be repaired, given time and enough funds.

Nord Stream has been a flashpoint in the energy standoff between the West and Moscow that has pummelled Western economies and fuelled a cost-of-living crisis.

Russia steadily reduced gas flows via Nord Stream 1 this year before halting them altogether at the end of August, blaming technical difficulties caused by Western sanctions. European countries said Moscow was using energy as a weapon.

Nord Stream 2 was never operational, and Western countries have resisted calls from Russia to drop their opposition to the project.

Jolted by the Nord Stream ruptures, European countries have started strengthening security and surveillance around critical infrastructure that could be vulnerable to attack.

Italy has strengthened surveillance and controls on underwater energy and telecommunications cables, a source told Reuters.

Focus has also turned to the security of other gas supply lines.

Eni, the biggest importer of Russian gas in Italy, at the weekend said Russia had halted all gas flows through the Tarvisio entry point, though its chief executive on Monday blamed the halt on short-term technical issues.

The stoppage of flows through the Tarvisio entry point "has absolutely nothing to do with geopolitical factors. It is due to the fact that Gazprom would have to pay a monetary guarantee for the transport of gas from Austria to Italy that was not there before," Claudio Descalzi said.

Dec 1 (Reuters) - Ukraine's military said Russia had pulled some troops from towns on the opposite bank of the Dnipro River from Kherson city, the first official Ukrainian report of a Russian withdrawal on what is now the main front line in the south..
WASHINGTON STATE・1 HOUR AGO
Fortune

‘This is blood money, pure and simple’: A top aide to Ukraine’s President Zelensky accuses BP of war profiteering with stake in Russian oil firm

A major energy company that pledged to sell its stake in Russia has yet to do so, and a top Ukrainian official just accused it of pocketing millions from the war. British Petroleum is one of the world’s largest oil and gas companies, so when it announced in February that it would sell its 19.75% stake in Russian energy company Rosneft in the wake of Vladimir Putin’s invasion of Ukraine, it held weight.
1 DAY AGO
The Associated Press

FRANKFURT, Germany (AP) — The Saudi-led OPEC oil cartel and allied producing countries, including Russia, are expected to decide how much oil to supply to the global economy amid weakening demand in China and uncertainty about the impact of new Western sanctions against Russia that could take significant amounts of oil off the market.
25 MINUTES AGO
RadarOnline

In a sign of the times for Vladimir Putin’s twisted Russian regime, a regional governor has been backed by the State Duma after saying the “descendants of African-American slaves” are to blame for the country’s growing crisis. Vadim Shumkov, governor of the Kurgan region, said Russian...
2 DAYS AGO
Business Insider

Kyiv caught the world off guard with its fast-paced counteroffensive this fall, including an elite Russian unit in a key city in eastern Ukraine.
3 DAYS AGO
Newsweek

Nurses and ambulance drivers should drop their demands for pay rises to match soaring inflation to “send a clear message” to Vladimir Putin, a cabinet minister says.Nadhim Zahawi switched tack in the battle to avert pre-Christmas NHS strikes by claiming they would reveal a “divided” UK when a united front is needed over Russia’s “illegal war”.“This is a time to come together and to send a very clear message to Mr Putin that we’re not going to be divided in this way,” the Tory party chair said.Union leaders say an improved pay offer for nurses, similar to that made...
50 MINUTES AGO
WEKU

The war in Ukraine is set to slow this winter, according to US intelligence

The head of U.S. intelligence says fighting in Russia's war in Ukraine is running at a "reduced tempo" and suggests Ukrainian forces could have brighter prospects in coming months.
CALIFORNIA STATE・21 MINUTES AGO
Reuters

LONDON/DUBAI, Dec 4 (Reuters) - OPEC+ is poised to stick to its oil output targets when it meets on Sunday, four OPEC+ sources said as the alliance gathers after the Group of Seven (G7) nations agreed a price cap on Russian oil.
WASHINGTON STATE・16 MINUTES AGO
Reuters

NEW YORK, Nov 30 (Reuters) - Prosecutors on Wednesday moved to confiscate $5.4 million from a U.S. bank account belonging to Russian businessman Konstantin Malofeyev, who Washington has accused of financing separatists in eastern Ukraine and Crimea and imposed sanctions on him.
TEXAS STATE・3 DAYS AGO
The Guardian

Iran locked into ‘vicious cycle’ over protests and arming Russia, says US

Iran’s leadership has locked itself into a “vicious cycle” that has cut itself off from its own people and the international community, the US special envoy has said, adding that Washington was more focused on Tehran’s decision to arm Russia in Ukraine and the repression of its internal protests than on talks to revive the nuclear deal.
WASHINGTON STATE・11 MINUTES AGO
Reuters

LONDON (Reuters) -Britain’s government is looking at bringing in the military to help keep public services running if key workers, including in the state-run National Health Service, take strike action, the chairman of the governing Conservative Party said on Sunday.
17 MINUTES AGO
Reuters

Dec 4 (Reuters) - An earthquake of magnitude 5.7 struck Gabon on Sunday, the European-Mediterranean Seismological Centre (EMSC) said. The quake was at a depth of 10 km (6.21 miles), EMSC said.
1 HOUR AGO
Reuters

Dec 4 (Reuters) - Air pollution in Bangladesh is robbing the South Asian nation of economic growth as well as causing premature death and illness, the World Bank said on Sunday.
17 MINUTES AGO