The 17 Most Anticipated Restaurant Openings in America This Fall 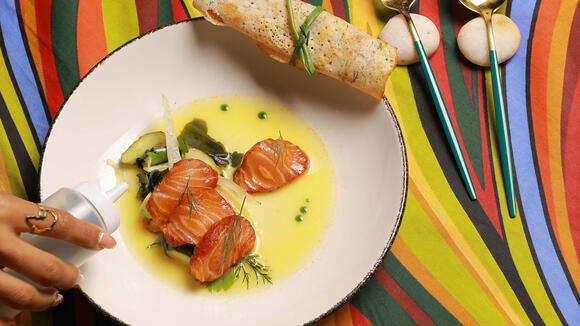 While the pandemic took a heavy toll on New York City , where its service sector jobs have been slower to recover than other major US metropolitan areas, the energy should return to the Big Apple this fall. As more people head back to the offices of Midtown and tourists return to see the city lit up this holiday season, the restaurant scene looks poised to reignite as well. When surveying the landscape of American dining there are exciting eateries ready to debut across the country—and that’s especially true in New York City. When you check out our picks for the most anticipated restaurant openings of the fall below, you’ll notice there are quite a few of the selections in the Empire State. But there are plenty of new dining options to entice us all around America.

Inside the new Japanese retail and dining development 50 Norman is an eight-seat counter that will serve a nine-course tasting menu from chef Yuji Tani. This intimate space can be tucked away from the rest of the market with sliding doors, and inside the Kyoto-native Tani prepares dishes that merge French and Japanese cuisines.

Beauty and the Butcher, Miami

Top Chef winner Jeremy Ford is growing in South Florida, continuing his partnership with Grove Bay Hospitality—the team behind his Michelin-starred Stubborn Seed —to create the meat-focused Beauty and the Butcher in Coral Gables. And instead of a tasting menu, Ford will offer an a la carte experience with seasonal plates and more of a neighborhood restaurant vibe.

Chef Dustin Falcon—an alum of The French Laundry and Lazy Bear—led Niku Steakhouse to a Michelin star. Now, he’s expanding with a more casual restaurant that will blend his childhood on the East Coast with a career that’s been devoted to California cuisine. The menu will explore seasonal Bay Area ingredients while serving braised meats and flatbreads from the hearth.

Unfortunately, the pandemic made it so Rose Noël did get a ton of time to show off her skills when she opened Danny Meyer’s first DC spot in January 2020. At the Italian-focused seafood restaurant Maialino Mare, she still impressed with dishes like Blue Crab Meatballs , so it’s exciting to see her get ready to take the reins again. This time she’s pairing with another titan, Marcus Samuelsson, to open another seafood-focused restaurant, but with decidedly different cultural influences. Hav & Mar will draw on Samuelsson’s Scandinavian and Ethiopian roots along with nods to modern Black cuisine.

Daniel Rose went to France to study art history and fell in love with old-school French cuisine like quenelle de brochet , tête de veau ravigoté and pot-au-feu . After becoming a star with his tasting menu-only Parisian spot Spring, he returned to America after 18 years away to open Le Coucou in New York. A Michelin star and a James Beard Award later, Rose will open a restaurant devoted to the Basque country and southwestern France at downtown LA’s The Hoxton hotel.

Chef Jonny Black and his co-owner and wife Monique Black are creating a restaurant deeply rooted in the Monterey Peninsula. From the produce to the seafood to the wine, they’ll be sourcing from nearby their new restaurant and drawing on culinary inspiration from France and Spain. The menu will include dishes like chicken wings stuffed with abalone sausage and served with buttermilk ranch; housemade garganelli with ridgeback prawns, corn and espellette; guinea hen with Sacramento crayfish; and Basque-style grilled beef prepared in a Mibrasa Grill.

Bobby Kwak, Joseph Ko and Korean-born chef DaeDae Kim are teaming up for an 18-seat counter that will explore modern Korean cuisine with American, French and some Japanese thrown in to their 12-to-14-course tasting menu.

The James Beard Award-winning chef Jeremiah Langhorne has referred to himself as a “huge Francophile,” and with his new all-day bistro, he’ll get the chance to fully indulge in French cooking. However, this restaurant won’t be aping Gallic classics. The team behind the Michelin-starred Dabney will create a menu more akin to the simple, seasonal cooking of Paris’s modern bistronomy movement.

It’s hard to narrow down what’s happening at Rockefeller Center to just one opening. With the hope of office drones and tourists returning to Midtown Manhattan, Rock Center’s developers are doubling down on great restaurants. JJ Johnson’s fast-casual Field Trip has already put down roots there, as has Ignacio Mattos. Now a new wave is coming. Le Rock, from the duo behind Frenchette has already opened and more superstar chefs and restaurateurs—Greg Baxtrom; JP and Ellia Park; Jess Shadbolt, Annie Shi and Clare de Boer; and more—are on the way with new concepts.

Austin ’s Emmer & Rye Hospitality has opened a restaurant in San Antonio , working with chef Berty Richter on a Mediterranean menu that relies on a charcoal grill. It’s the latest in a string of concepts from the group (led by chefs Kevin Fink and Tavel Bristol-Joseph) that opened Robb Report’s Best New Restaurant winner in 2020, Hestia . The menu includes dishes like housemade pita, fish kofta, lamb belly ribs and pork souvlaki.

It’s hard to think of the globe-bestriding Major Food Group—the hospitality empire behind hit restaurants like Carbone and The Grill—and remember a time when they were more like indie darlings than blockbuster restaurateurs. But that time was the early 2010s, when Mario Carbone and Rich Torrisi had the intimate Torrisi in Manhattan’s Little Italy, serving a modestly priced tasting menu that became beloved in the city. They’re reviving Torrisi…kind of. The restaurant moves a few blocks away and will have an a la carte menu that’s an ode to Little Italy. Expect dishes like hand-pulled mozzarella; cavatelli with Jamaican beef patty ragu; and a dry-aged duck with a sauce made from mulberries—a tip of the cap to Mulberry Street.

Chef Fermín Núñez has packed in patrons at his acclaimed Austin restaurant Suerte since he opened and he hopes to repeat the feat at his new restaurant Este. With Este, he’ll serve Mexican coastal cuisine that utilizes a charcoal-fired grill. Recipes will be inspired by the time Núñez spent in Guadalajara, Ensenada and Puerto Escondido.

At Gozu, chef Marc Zimmerman opened a different kind of steakhouse with a different approach to Wagyu beef. This was a tasting menu experience that wanted to explore the best of Japanese beef from nose to tail. Inspired by Tokyo’s after-work bars, the restaurant will focus on Japanese spirits while also serving up more casual fare than Gozu, focusing on shareable plates and skewers. Expect a lot of high-end beef and Japanese whisky.

Kwame Onwuachi is ready to play Lincoln Center. Well, in a sense. After leaving his hit Washington, DC restaurant Kith/Kin during the pandemic, he headed west to LA. Now he’s returning to his hometown to lead his first restaurant in New York, which will open as part of Lincoln Center’s multimillion-dollar renovation. Tatiana, named for Onwuachi’s older sister, will serve Afro-Caribbean fare with a heavy New York influence.

Aaron Bludorn came to Texas and opened a hit restaurant right in the middle of the pandemic. The Daniel Boulud mentee’s eponymous debut in Houston showed off the skills he learned at Café Boulud in New York City, but also featured Bay Area and Pacific Northwest influences. Now, he’s preparing a sequel and has called on a skilled chef to help him. Fellow Café Boulud alum Jerrod Zifchak will lead the seafood-focused Navy Blue, also bringing his experience from working at Michelin three-star Le Bernardin.

This seafood-focused, wood-fired restaurant is inspired by Johnny Spero’s time in the Basque Country cooking at Mugaritz. The chef opens this new spot as he seeks to rebuild his Michelin-starred Reverie, which recently burned down. Unlike Reverie, which is tasting menu driven, the 120-seat Bar Spero focuses on shared plates in a boisterous atmosphere. The menu features dishes like Maine scallops with olive oil and preserved citrus and an ice cream dessert that looks like Basque cheesecake.

Alex Stupak’s brain never stops churning. The pastry chef at modernist restaurants Alinea and WD~40 took a hard right turn when he went out on his own, opening Mexican food-focused Empellón in New York City. He’s expanded and iterated on that concept around the Big Apple from the Midtown fine dining flagship to the West Village taqueria to the East Village bar and more. Now, he’s got a whole new idea in the works. At Mischa, he wants to explore and—in typical Stupak fashion—push the bounds of American cuisine. As he told Grubstreet , that may mean hummus made from chana daal and black tahini or a brisket hot dog topped with kimchi.

Michael Solomonov’s takeover of New York City continues. Hot on the heels of debuting a Laser Wolf outpost atop the Hoxton hotel in Williamsburg, the James Beard Award-winning Philly chef has opened up shop on the ground floor as well. This time, he’s brought over another of his Philadelphia hits, K’Far, an all-day Israeli café and bakery that invites you to grab a seat and linger, whether over coffee and pastries or cocktails and dinner. “In Israel, meals don’t start or stop,” Solomonov told Eater NY. “They carry on.” In that spirit, K’Far is offering three menus every day. Pastries like chocolate rugelach...
NEW YORK CITY, NY・5 DAYS AGO
Robb Report

In the heart of New York City’s trendy Meatpacking District, this $25 million architecturally fabulous residence ticks several boxes. The full-floor residence has 15 rooms, 5,500 square feet of space and ultra-luxe craftsmanship and materials for discerning buyers. There are few homes in the city with this level of detail. Residence No. 6 at 66 Ninth Avenue, a celebrity-loved building that Olivia Wilde, Jason Sudeikis, Glenn Beck, Jason Reitman and Molly Shannon once called home, is one of the most exquisite residences in the building. The picture-perfect building has also been the backdrop for magazine editorials, like Nicky Hilton Rothschild’s 2019...
NEW YORK CITY, NY・6 DAYS AGO
Robb Report

The new restaurant openings at Rockefeller Center are continuing apace, this time with a spot from the team behind the beloved King in Soho. At Jupiter, chefs Jess Shadbolt and Clare de Boer are turning their eye toward a dish they’ve always loved but haven’t had the chance to make in large quantities at King: pasta. “We’re zooming in on something we really respond to and expanding it,” de Boer told Eater NY. “This is how we like to eat.” On a menu meant to be enjoyed for both lunch and dinner, pasta is the real highlight. But before tucking in to...
NEW YORK CITY, NY・5 DAYS AGO
Robb Report

It may not be as big or powerful as Mjölnir, but that doesn’t make Chris Hemsworth’s latest accessory of choice any less impressive. The Thor: Love and Thunder star was photographed wearing a pink gold Audemars Piguet Royal Oak at a New York screening of Limitless, his new Disney Plus docuseries about pushing himself to his limits in an attempt to live a longer and more fulfilling life. What better time to show off the dazzling timepiece, one that manages to be both elegant and sporty. Audemar Piguet’s most iconic model has never been more popular as it approaches its 50th birthday....
NEW YORK CITY, NY・6 DAYS AGO