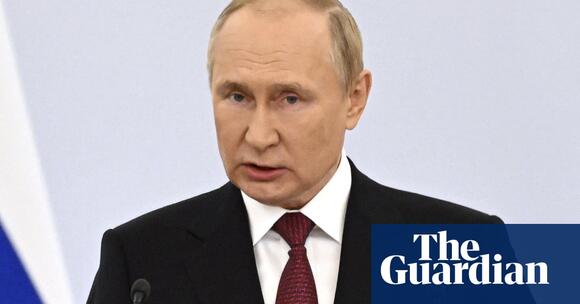 Eight-and-a-half years after Vladimir Putin announced the annexation of Crimea, he gathered the elites of Russia in the Kremlin’s St George Hall for another land-grab ceremony: this time laying claim to four more Ukrainian regions.

The annexation formalities were preceded by an angry, rambling speech that dwelled only briefly on either Ukraine or the four regions of which Russia now claims ownership. Instead, Putin railed at the west for a litany of sins, ranging from destabilising Russia in the 17th century to allowing gender reassignment surgery.

He also reiterated his threat to use nuclear weapons, claiming the US had “created a precedent” for the use of nuclear force in 1945.

Friday’s speech is likely to go down as another milestone in Putin’s long reign over Russia. And while it was the same hall, the same crowd and the same message as the Crimea annexation in March 2014, the context is very different.

Then, Putin carried much of Russia’s elite and society with him, on a wave of patriotic fervour boosted by state television propaganda. Outside Russia, while many were shocked at the naked land grab, others felt Putin had a point: after Iraq and Libya, how could the west lecture others on violating sovereignty? Many European politicians wanted to get back to business as usual with Russia as quickly as possible.

This time, the domestic and international situations are far less favourable for Putin. At home, he has embarked on an unpopular mobilisation drive, prompting hundreds of thousands of Russians to try to leave the country. The improvements in quality of life that the first years of Putinism brought are drying up amid sanctions and international isolation.

Since February, the Russian leader has become an international outcast, with even non-western leaders rebuking his blatant aggression in Ukraine, undermining his claims on Friday to speak for the whole non-western world.

In 2014, he railed at the hypocrisy of western politicians who “call something white today and black tomorrow”, and many nodded along.

Putin veered from denouncing the “totalitarianism, despotism and apartheid” of today’s west, to bringing up the historical pillaging of India, the bombing of Dresden at the end of the second world war and the “many genders” in fashion in the west.

Russia’s mission, he said, was to “defend our children from monstrous experiments designed to destroy their consciousness and their souls”.

Andrei Kolesnikov, of the Carnegie Endowment for International Peace, wrote on Twitter: “Putin’s speech is a set of unbelievably illiterate conspiracy cliches that 30 years ago could be read in marginal national-patriotic newspapers.

“Now it has become the policy of the former superpower, which even in the days of the Soviet leaders could not afford such a discourse.”

On Ukraine, Putin said Russia was “ready for negotiations”, but immediately followed this with an insistence that the annexed territories would be part of Russia “forever” and could not be part of any talks.

Ukraine has already said it will ignore the annexations and continue its military campaign to regain territory. Kyiv believes any “ceasefire” would simply give Russia time to regroup before a renewed assault.

After all, in his March 2014 speech, Putin explicitly ruled out seizing more territory: “Don’t believe those who try to frighten you with Russia and who scream that other regions will follow after Crimea … We do not need this.”

And yet, here they were, back in the St George Hall, applauding as four more Moscow-appointed puppet leaders signed over their regions to Moscow.

But annexation involves more than pieces of paper, and while in 2014 Russia had just carried out a swift and stealthy military operation to seize Crimea, this time things are far less clear-cut. Fighting continues in and around all four of the regions Russia is claiming, prompting the mobilisation order.

Putin’s speech left unanswered almost all the key questions about what might happen next. His spokesperson, Dmitry Peskov, could not say on Friday morning whether Russia was claiming all of the Zaporizhzhia and Kherson regions, or only the parts of them it already controls, promising to “clarify” this later. The speech left us none the wiser.

Friday’s audience, predominantly older men with security and military backgrounds, grimly applauded their leader. But many in the Russian political elite are aghast at the events of the past few months, even if they have not made their criticisms public. They also remain in the dark about how events might develop.

“Nobody knows what happens next, it’s clear there is no grand strategy,” said one Moscow source, a well-connected political insider. “If one thing doesn’t work, we will try something else, and nobody knows where it will lead. Decisions are taken in the head of one man.”

While Putin has talked for two decades about the west’s desire to destroy Russia, the intensity and repetition with which he tackled the subject on Friday suggests this is not just political theatre: he has become a true believer.

What this means for the biggest question of all remains unclear. Does this fervour make him more or less likely to use nuclear weapons? Are his threats a bluff, or not? Again, those in Moscow are no better informed than the rest of us.

“Nobody knows. I doubt if he knows yet either, to be honest,” the source said.

The US is waiting for a “serious response” from Russia to a series of proposals regarding the release of the basketball star Brittney Griner, a senior US diplomat said. Elizabeth Rood, the US chargée d’affaires in Moscow, told Russia’s state-owned RIA news agency that talks about freeing Griner – who was sentenced to nine years in a penal colony on charges of possessing and smuggling drugs – were ongoing. But Rood said Russia was yet to seriously engage.
19 HOURS AGO
The Guardian

Fighting around the key eastern Ukraine town of Bakhmut has descended into a bloody morass with hundreds of dead and injured reported daily, as neither Russian or Ukrainian forces were able to make a significant breakthrough after months of fighting. As Russia moved fresh formations to the area in recent...
18 HOURS AGO
The Guardian

Alexei Navalny’s survival may depend on his value to Vladimir Putin as a future bargaining chip, his chief aide said, warning that the opposition leader’s health was at risk after being forced into indefinite solitary confinement. Leonid Volkov, speaking on a visit to London, added that Navalny had...
1 DAY AGO
The Guardian

Company fires 2,700 workers while they were sleeping days before Thanksgiving

An Illinois resident won her case against the company Sterigenics – but other sufferers’ lawsuits hang in the balance
WILLOWBROOK, IL・2 DAYS AGO
The Guardian

Trump’s act is ‘old and tired’, says his own former national security adviser

Protesters across China have made one thing very clear: after three years of harsh restrictions, many people are tired of their government’s pursuit of an increasingly ineffective zero-Covid strategy. China once celebrated its success in containing outbreaks and keeping its economy running, but it has been slow to adapt to a world of more infective variants and mass vaccination. As life begins to feel increasingly normal in Britain and elsewhere, 49 cities – representing a third of China’s population and two-fifths of its economic output – are in partial or total lockdown.
19 HOURS AGO
The Guardian

Free speech absolutists are like the cocky audience of a spectator sport – they think they could do better than the players, if they were just allowed a crack at it. To them, speech should be as free as possible, period. Nowhere is their oversimplification of the issue more evident than on social media, where abuse and disinformation have created a new frontier of regulation – and with it a cohort of disingenuous free speech warriors.
1 DAY AGO
The Guardian

Mother of London firefighter who killed himself welcomes damning report

Exclusive: Linda Francois, whose son Jaden Francois-Esprit was bullied in Wembley, says culture must change
2 DAYS AGO
The Guardian

American stage and screen actor who oozed menace in his many roles as the bad guy, heavy or villain
1 DAY AGO
The Guardian

The Oscar-winning What A Feeling singer, who played Coco Hernandez in 1980’s Fame, died at her home in Florida, her publicist said
FLORIDA STATE・2 DAYS AGO
The Guardian

A ‘certificate of origin’ scheme could counter concerns about renewables supply chains, says Clean Energy Council
12 HOURS AGO
The Guardian

Russia-Ukraine war live: UK confirms supply of missiles to Kyiv as Russian forces might be preparing to leave Zaporizhzhia nuclear plant – as it happened

UK MoD says it has provided Brimstone 2 missiles to Ukraine; reports suggest there are signs troops could be getting ready to leave
1 DAY AGO
The Guardian

Brexit has made Britain the sick man of Europe again

When recently asked on the Today programme to cite chapter and verse on the subject of Brexit “opportunities” Michael Gove, the secretary of state for all seasons, was hopelessly out of his depth. However, Gove missed a trick. What he should have said, but as a signed-up Brexiter...
2 DAYS AGO
The Guardian

A two-day-old baby is killed in an attack on a maternity ward in southern Ukraine. Officials say at least 437 children have died since Russia’s invasion began. More than 800 have been injured. How many kids are permanently traumatised is anybody’s guess. Every day, Vladimir Putin gets away...
2 DAYS AGO
The Guardian

Democrats, anti-racist groups and some Republicans criticize president for meeting Fuentes at dinner with Kanye West
FLORIDA STATE・2 DAYS AGO
The Guardian