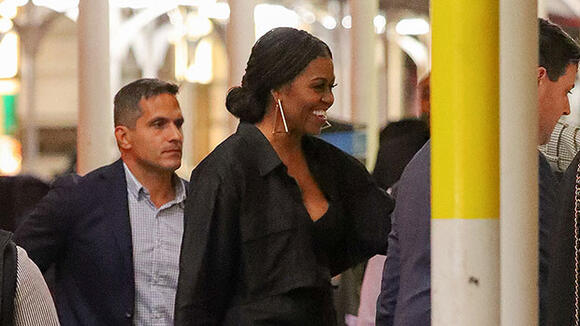 Michele slayed in yet another high fashion outfit, as she stepped out for dinner with 'The Boss' and his wife in the Big Apple!

Jennifer Lawrence, 32, looked as content as could be during her latest outing with her new son, Cy. The actress and the nine-month-old took a stroll in New York City, NY on Monday and she appeared to be makeup-free as she pushed his stroller and flashed a smile. She kept warm in a black coat, baggy gray pants, and boots, as her hair was pulled back in a ponytail and she topped the look off with sunglasses.
NEW YORK CITY, NY・8 HOURS AGO
HollywoodLife

Melanie Griffith, 65, Snuggles Up To Mom Tippi Hedren, 92, In Rare Photo: ‘Thankful’ She’s Still With Us

No matter what, a parent’s child is always a child. Melanie Griffith shared an adorable photo with her mom Tippi Hedren on her Instagram on Monday, November 28. The actress, 65, cuddled up to her mom, 92, who is also a legendary actress in her own rite, for a sweet photo together.
16 HOURS AGO
HollywoodLife

Michael Strahan‘s greatest gift in life is being a dad to his four children. The Good Morning America anchor, 51, has one son, Michael Jr., 27, and three daughters, Tanita, 30, and twins Isabella and Sophia, 18. Michael shares his two older children with his first wife, Wanda Hutchins. His second wife, Jean Muggli, is the mother of his twin daughters. Michael spoke to HollywoodLife EXCLUSIVELY in July 2022 about being a dad of four. “I love the challenge of being a parent, and I look forward to the challenge they’re gonna have when they’re parents,” he said.
10 HOURS AGO
HollywoodLife

Michael Strahan is a TV host for Good Morning America and a former NFL player. He is currently not married. Michael has been married a total of two times, most recently to Jean Muggli. “I think marriage is great, I really do,” Michael Strahan said in a 2018 episode of...
TEXAS STATE・15 HOURS AGO
HollywoodLife

Amanda Bynes has a brand-new hairstyle! The actress, 36, was seen with a shorter haircut while taking a coffee break during one of her cosmetology classes on Monday, November 28. Amanda kept a low-profile, wearing shades as she headed to the coffee shop, but her new hair looked fabulous. While she kept the same dark black shade that she had in the past, the new style was closer to a bob than her longer look.
10 HOURS AGO
HollywoodLife

There’s no better way to finish a holiday weekend than with some Italian food in New York! Gwyneth Paltrow and her daughter Apple Martin had a perfect mommy-daughter day together on Sunday, November 27. The pair got some shopping done and the Shakespeare In Love star, 50, shared photos of herself and her daughter, 18, out in the Big Apple on her Instagram Story.
NEW YORK CITY, NY・1 DAY AGO
HollywoodLife

Jennifer Lopez, 53, talked a lot about her husband Ben Affleck, 50, in a new interview, including how she felt after they ended their engagement in 2004. “It was so painful after we broke up. Once we called off that wedding 20 years ago, it was the biggest heartbreak of my life,” J.Lo told Apple Music’s Zane Lowe. “I honestly felt like I was going to die. It sent me on a spiral for the next 18 years where I just couldn’t get it right. But now, 20 years later, it does have a happy ending. It has the most would-never-happen-in-Hollywood ending,” she added.
1 DAY AGO
HollywoodLife

Tish Cyrus went public with her new man on Nov. 27, more than seven months after filing for divorce from Billy Ray Cyrus. On her Instagram story, Tish, 55, shared a photo of her in the embrace of another – who she tagged as Dominic Purcell. “Thanks for the cute photo, [Vijat M],” Miley Cyrus’s mother wrote. In the subsequent IG Story, Tish shared a quote – “In God’s perfect timing, everything will turn out right!” – while adding, “Sometimes that’s hard to believe but it is so TRUE.”
1 DAY AGO
HollywoodLife

The Ticket to Paradise star Julia Roberts, 55, officially has two young adult kids, as her twins, Phinnaeus and Hazel, turned 18 on Nov. 28. “18 Love you,” the brunette beauty captioned the throwback snapshot of her two babies. In the family photo, Julia was pictured holding one of the kids up and gasping in astonishment. She wore a sleeveless dress and had her brunette locks tied up in an effortless, yet chic, updo.
1 DAY AGO
HollywoodLife

Collin Gosselin may still be estranged from his mom Kate Gosselin, but his dad Jon Gosselin, for one, is “so proud” that he spoke out about her in his recent interview with Entertainment Tonight. “Jon is so proud of Collin for having the courage and the strength to stand up and speak his truth,” a source close to the reality star, 45, told HollywoodLife EXCLUSIVELY. “Jon never asked or suggested Collin to do this. It was completely his own idea. But Collin did approach his dad with the idea before making any final decisions.”
1 DAY AGO
HollywoodLife

Pete Davidson Telling Friends EmRata Is ‘The Girl Of His Dreams’: His Mom Is Excited To Meet Her (Exclusive)

“After spending Thanksgiving together and then going to the New York Knicks game together, it is more than obvious to anyone who knows Pete Davidson that he is completely into Emily Ratajkowski,” a source close to the Saturday Night Live alum tells HollywoodLife EXCLUSIVELY. Pete, 29, and EmRata, 31, went public with their long-rumored romance on Nov. 27 by sitting courtside for the Knicks game, less than a week after the two attended a Friendsgiving together. Though Pete has been romantically involved with some high-profile women – from Ariana Grande to Kate Beckinsale to Kim Kardashian – this new romance might be endgame for Staten Island’s favorite son.
NEW YORK STATE・10 HOURS AGO
HollywoodLife

Years after Kate Gosselin sent her son, Collin Gosselin, to an institution to help him with his alleged behavioral issues, their relationship is practically nonexistent. “After being there, I didn’t have a relationship with her,” Collin, 18, told Entertainment Tonight in his first one-on-one interview. Collin said that even before Kate, 47, sent her him away, “I don’t think we had much of a relationship, and I think that just kept tearing it even more down.”
1 DAY AGO
HollywoodLife

Alyssa Milano, 49, isn’t messing with Elon Musk, 51, anymore. The actress/activist decided to trade in her Tesla and told the whole world about it via his other company, Twitter, on Saturday, Nov. 26, 2022. Alyssa Milano. “I gave back my Tesla. I bought the VW ev. I love...
1 DAY AGO
HollywoodLife

Dominic Purcell is an actor widely known for his role as Lincoln Burrows in the hit TV series, Prison Break. The actor is rumored to be dating Miley Cyrus’ mom, Tish Cyrus. He was previously linked to 90210 star AnnaLynne McCord. On Nov. 27, 2022, Tish Cyrus, seemingly confirmed...
1 DAY AGO
HollywoodLife

Thanksgiving weekend is for spending time with family, and that’s just what Ben Affleck did! The actor, 50, closed out the holiday weekend by visiting a Beverly Hills farmer’s market with his daughters Violet, 16, and Seraphina, 13, and stepchild Emme, 14, on Sunday, November 27. The family seemed like they were having a great time for the shopping day.
BEVERLY HILLS, CA・1 DAY AGO
HollywoodLife

North West gave an indirect shoutout to her dad, Kanye West, in one of her most recent solo TikTok videos. The nine-year-old showed off the various hair and beauty products she apparently uses when preparing for her “long days,” in the clip. A running shower could also be seen as the rapper’s song “Flashing Lights” played.
2 DAYS AGO
HollywoodLife

Amanda Kloots combined her love for fitness with her love for the holidays to bring to life CBS’s new original Christmas movie, Fit For Christmas. The fitness instructor-turned-The Talk host joined the HollywoodLife Podcast to chat about the major career moment, and admitted she conceptualized the film in the midst of a trying time. “In July of 2020, I had just lost my husband Nick [Cordero] and I could not sleep in the middle of the night. And if you guys remember, Hallmark Channel was playing Christmas movies to help lift the spirits of people, calling it ‘Christmas In July.’ So, it was 3 am, I turned on the TV and watched a movie called Christmas Cookies with [my son] Elvis in my arms,” Amanda recalled on the HollywoodLife Podcast, exclusively. “He even woke up and we were watching it together, and I was like, ‘You know what? I have an idea for a Christmas movie!”
MONTANA STATE・1 DAY AGO
HollywoodLife

Khloe Kardashian isn’t letting the little things get by her! The Good American co-founder, 38, took to Instagram on Monday, November 28 to share a fun moment with her daughter True Thompson and niece Chicago West, both four. In the first pic, a barefoot True adorably smiled as she rocked a Spice Girls t shirt and a pair of bike shorts. She accessorized with an ankle bracelet and several bracelets on her wrist and struck a couple of fun poses for the camera. In the background, a couple of pillows in the shape of Khloe could be seen placed along a bench among some teddy bears and cushions.
1 DAY AGO
HollywoodLife

Kanye West wasted no time in promoting his 2024 run for president as he was spotted rocking “Ye24″ gear while visiting a church in Los Angeles on Saturday, Nov. 26. The “Famous” rapper, who lost billions after businesses cut ties with him for making antisemitic remarks, donned a black, orange and white wind breaker with the hood up as he kept a dour look on his face arriving at the church.
LOS ANGELES, CA・2 DAYS AGO
HollywoodLife

Katherine Heigl’s Husband Josh Kelley: All About Their Romance & Family Together

Katherine Heigl is an actress who has appeared in various films and television series, including Grey’s Anatomy. She is married to Josh Kelley. Katherine was previously romantically linked to actors Jason Behr and Joey Lawrence. Katherine is currently starring in the final season of the television series, Firefly Lane.
UTAH STATE・1 DAY AGO