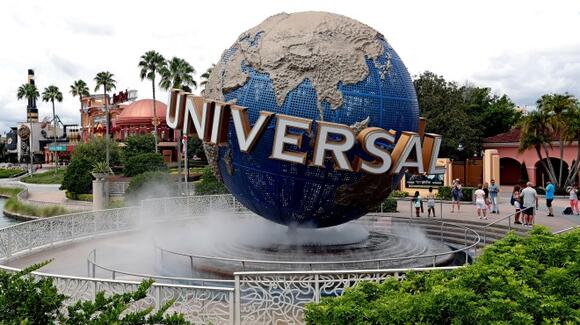 It’s still unclear exactly how much of the park is open, given the extensive flooding and — in the case of the giant building that houses Jurassic Park River Adventure — structural damage. More on that below.

According to the park’s announcement, its Volcano Bay reopened today.

PREVIOUSLY on September 29 : Hurricane Ian unleashed 14 inches of rain and winds up to 60 mph in Orlando on Wednesday night and this morning the damage from that onslaught was clear at Universal Orlando Resort.

News reports and photos posted to social media showed many areas of the park under several feet of water, including the Incredible Hulk Coaster the lower tracks of which are normally suspended over the park’s lagoon, but this morning they were submerged in the lagoon, which had obviously risen with the deluge.

Flood waters also inundated the walkway to the resort’s CityWalk and Portofino restaurant, the entrance to the adjacent Double Tree by Hilton hotel and the I-4 Express near the park.

The most noticeable impact from Ian may have been the giant hole blown in the side of the giant building that houses Jurassic Park River Adventure.

Park officials announced late today that, while “assessment and recovery efforts” continue, a “phased reopen” will begin on Friday for guests of the resort’s hotels who rode out the storm there. It is unclear which parts of the park that may include. Deadline reached out to park officials and will add any further comment received.

A large group of Walt Disney World employees marched near — but not on — Walt Disney World property today, holding signs that said “Magic Doesn’t Pay The Bills” and chanting “need a raise.” The Services Trades Council Union (STCU), which is a coalition of six unions representing close to 42,000 WDW cast members, is negotiating a new contract with Disney this week. The old agreement , which expired October 1, raised the minimum wage from $10 to $15. Among the group’s concerns this time are wage increases, healthcare costs, child bonding leave, retirement, and premiums. Earlier this month, the union...
ORLANDO, FL・2 DAYS AGO