The Portland Marathon is this Sunday. Drivers, you’ve been warned 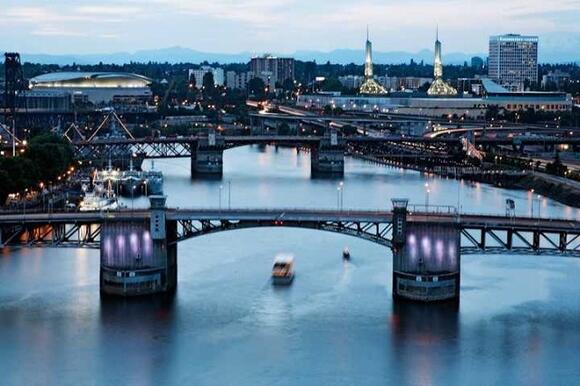 PORTLAND, Ore. ( KOIN ) — The 50th annual Portland Marathon starts on Sunday, Oct. 2 at 7:10 a.m., and is expected to impact traffic around the city throughout the day.

The County of Multnomah said that the marathon will shut down multiple lanes of vehicle and pedestrian traffic across several Willamette River bridges, including Broadway Bridge, Burnside Bridge, Morrison Bridge and Sellwood Bridge. Broadway and Burnside Bridges will also remain closed to heightened water traffic, with no lifts occurring between 6:30 a.m. and 2 p.m. on Sunday.

Experienced Portland commuters, be warned, this year’s race route is completely different from past years. That’s because event organizers intentionally added more Portland neighborhoods to the route in celebration of the marathon’s golden jubilee.

“The race route has been entirely changed from previous routes in an effort to include more of Portland’s neighborhoods and create a memorable experience for runners and residents,” Marathon organizers stated.

Multnomah County has announced the following changes to bridge traffic for Sunday, Oct. 2:

The bridge will be closed to all motor vehicles, including TriMet buses and Portland Streetcar, from 6:30 a.m. to 9:00 a.m. TriMet’s 17 bus line will detour to the Steel Bridge. Sidewalks will remain open for bicyclists and pedestrians. Drivers can use the Steel or Fremont bridges during the closure. For information on Portland Streetcar service changes, visit www.portlandstreetcar.org/schedules.

The north sidewalk, bike lane and outside westbound lane will remain closed from 7:30 a.m. to 1:30 p.m. TriMet bus routes 12 and 19 detour to Steel Bridge. Bus route 20 detours to Hawthorne Bridge.

The onramp from SW Naito Parkway, the Morrison Bridge north and south traffic lane and the SE Water Ave ramp will remain closed due to construction. The south shared use path on the bridge will be closed from 12 p.m. to 2 p.m.

‘I want everybody to win’: Gresham food cart pod hit by break-in

30 gallons of fuel spill on railroad tracks in North Portland

About 30 gallons of diesel spilled onto the Union Pacific Railroad tracks near Portland's Cathedral Park on Tuesday, according to the Oregon Department of Environmental Quality.
PORTLAND, OR・1 DAY AGO
KOIN 6 News

With more than 600 Portland city workers going on strike, there's quite a divide between what the union wants and what the City of Portland is proposing.
PORTLAND, OR・4 HOURS AGO
KOIN 6 News

As part of a multi-year plan, safety upgrades are being made along Southeast 82nd Avenue in Portland -- a street known for being dangerous for pedestrians.
PORTLAND, OR・2 DAYS AGO
KOIN 6 News

Blaze alongside I-5 in N Portland was third tent fire in 1 day, officials say

A fire broke out on the shoulder of southbound Interstate 5 in North Portland during Wednesday's evening commute, causing a large plume of black smoke seen from miles away.
PORTLAND, OR・1 DAY AGO
KOIN 6 News

The desire to serve her community is what drew Portland Police Bureau new hire Diana Rudakova to law enforcement. While she waits to attend the state police academy, she’s fulfilling her passion in another way by working for the Sunshine Division.
PORTLAND, OR・1 DAY AGO
KOIN 6 News

A driver is facing a vehicular homicide charge after he crashed in Vancouver late Wednesday night, killing his passenger, according to Washington State Patrol.
PORTLAND, OR・15 HOURS AGO
KOIN 6 News

City of Portland employees going on strike after failed negotiations

Hundreds of city employees will be going on strike after negotiations with the City of Portland fail to reach a last-minute agreement.
PORTLAND, OR・1 DAY AGO
KOIN 6 News

Car enthusiasts, rev up your engines! This Kohr Explores is putting the pedal to the metal.
PORTLAND, OR・16 HOURS AGO
KOIN 6 News

Sometime over the night of Jan. 31, the Police Memorial in Waterfront Park was vandalized, removing the names from the shrine
PORTLAND, OR・9 HOURS AGO
KOIN 6 News

The Portland City Council has approved the Portland Police Bureau's request to spend $1.5 million on a new patrol plane.
PORTLAND, OR・1 DAY AGO
KOIN 6 News

Portland police say the tow truck driver who struck a different tow truck driver on the side of the Banfield Freeway on Sunday has been identified thanks to local news coverage.
PORTLAND, OR・1 DAY AGO
KOIN 6 News

The “life is too short guy,” also known as Scott White, is an author on a mission to make the world happier one smile at a time and his newest book gives a roadmap to make the most out of every minute of our lives.
PORTLAND, OR・1 DAY AGO
KOIN 6 News

Arrest made in deadly stabbing in downtown Portland

One person was arrested in connection to a deadly stabbing in downtown Portland late Tuesday night, authorities said.
PORTLAND, OR・1 DAY AGO
KOIN 6 News

Brian Hunzeker, one of three officers found to be involved in the leak of a false report linking ex-Portland commissioner Jo Ann Hardesty to a hit and run, has been reinstated to the Portland Police Bureau, officials said.
PORTLAND, OR・6 HOURS AGO