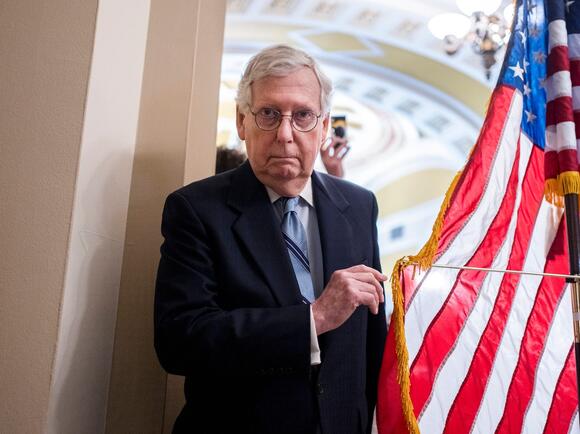 Senate Minority Leader Mitch McConnell endorsed on Tuesday a bipartisan bill to reform the Electoral Count Act and prevent another attempt to overturn the 2020 election results as former President Donald Trump sought to do on January 6.

His endorsement, along with the backing of 11 senators from each party, puts the legislation on track to pass the Senate, though likely not until after the November midterm elections.

"I strongly support the modest changes that our colleagues in the working group have fleshed out after literally months of detailed discussions," said McConnell in floor remarks on Tuesday afternoon. "I'll proudly support the legislation, providing that nothing more than technical changes are made to its current form."

"The chaos that came to a head on January 6 of last year certainly underscored the need for an update," he added.

The bill's primary changes include update the 19th-century law to make it harder to challenge state-certified election results and clarify ambiguities in the law that Trump sought to exploit as he clung to power.

Most significantly, the bill raises the threshold for hearing objections to states' election results up to one-fifth of each chamber; currently, objections require just one person in each chamber.

The bill also clarifies that the Vice President's role is merely ceremonial and does not include the power to unilaterally toss out states' electors, as Trump claimed of then-Vice President Mike Pence in the lead-up to January 6.

Last week, the House of Representatives voted on a separate bill put forward by Democratic Rep. Zoe Lofgren of California and Republican Rep. Liz Cheney of California that had similar goals.

House Republican leadership told members to vote against it, and ultimately just nine Republicans — all of which are leaving Congress in January — voted for the bill.

You could of stopped all this earlier on, but you didn’t. You enabled him, and allowed corruption to keep happening. You were looking out for your own gain, not what was good for the United States….

Dump McConnell, he is squish no spine drain the swamp on both sides. our country now is run by the Deep State of tratiors conspring with our enemies to the overthrow our country in my view

Walker, a former NFL player, struggled in the general election compared to the other statewide GOP candidates, who all won their respective races.
GEORGIA STATE・18 HOURS AGO
Newsweek

"I don't expect Manchin or Sinema to have much influence to be quite honest," one expert told Newsweek.
ARIZONA STATE・1 DAY AGO
The Independent

Donald Trump is calling for himself to be reinstated as president or for the 2020 election to be run again.In a Saturday morning post on Truth Social, the twice-impeached former president falsely claimed that alleged “massive and widespread fraud and deception” by Democrats and big tech companies undermined the results.He asked: “Do you throw the Presidential Election Results of 2020 OUT and declare the RIGHTFUL WINNER, or do you have a NEW ELECTION?”Further, the one-term president and former reality TV host falsely claimed that the alleged fraud was of such magnitude that all laws, including the Constitution, could be...
LOUISIANA STATE・21 HOURS AGO
Business Insider

White House spokesperson criticizes Trump's suggestion to get rid of the Constitution: 'You cannot only love America when you win'

On Saturday, former President Donald Trump called for a "termination" of the constitution on his Truth Social platform.
CALIFORNIA STATE・9 HOURS AGO
Business Insider

Trump's suggestion that E. Jean Carroll was 'too ugly to rape' was too personal to be official business, appeal says

Trump's lawyers argue he can't be sued for statements he made about Carroll while acting as president in 2019.
1 DAY AGO
Business Insider

"The US has given a lot of weapons, a lot of financial aid, a lot of humanitarian aid to Ukraine and Europe isn't strong enough yet," Marin said.
WASHINGTON STATE・1 DAY AGO
Business Insider

Obama mocks Herschel Walker for claiming that he let the former president win at basketball before admitting that the 2 men have never met: 'This would be funny if he were not running for US Senate'

On at least three occasions between 2017 and 2020, Walker claimed to have played basketball with Obama, HuffPost reported.
GEORGIA STATE・2 DAYS AGO
Business Insider

Obama slams Herschel Walker for musing if it's better to be a vampire or a werewolf: 'He can be anything he wants to be except for a United States senator'

"This is a debate that I must confess I once had myself when I was seven," Obama deadpanned of Walker's previous bizarre aside during a rally.
GEORGIA STATE・1 DAY AGO
Business Insider

DeSantis brushes off Trump question from press, says there are plenty of other people living in Florida

DeSantis often gets asked about Trump given that the former president has openly criticized him and given him the nickname "Ron DeSantimonious."
FLORIDA STATE・2 DAYS AGO
Business Insider

The Supreme Court will hear oral arguments on Biden's student-loan forgiveness in February, but the debt relief will remain blocked for now.
TEXAS STATE・2 DAYS AGO
Business Insider

"Conservatives' hostility to the Biden administration on our terms tends to blind us to just how effective Biden has been on his terms," he wrote.
WASHINGTON STATE・15 HOURS AGO
Business Insider

Twitter's decision to throttle news about the president's son prompted lawmakers to call for the repeal of "the Internet's most important law."
CALIFORNIA STATE・1 DAY AGO
Toby Hazlewood

Marjorie Taylor-GreenePhoto byGage Skidmore, United States of America, CC BY-SA 2.0 via Wikimedia Commons. On December 2, the House of Representatives passed a series of bills intended to provide help for pregnant veterans and those who have just given birth. The bill - HR 2521 - received bipartisan support in the House, and will now pass to the Senate for voting having exceeded the required two-thirds majority.
GEORGIA STATE・20 HOURS AGO
Business Insider

There might be another legal route for Biden's student-debt relief if lawsuits currently blocking the plan are successful.
MASSACHUSETTS STATE・1 HOUR AGO
Business Insider

Trump has just a handful of vocal 2024 supporters in Congress. We asked them why they back him over Ron DeSantis and others.

Twitter granted requests from both the Trump White House and the Biden campaign to remove content in 2020, report says

Elon Musk has only condemned the Biden campaign, despite the report he hyped showing the Trump White House also requested that Twitter remove content.
9 HOURS AGO
Business Insider

Congress is about to get a little bit younger, with lawmakers' median age dropping by two-and-a-half years

However, assuming current membership holds, Congress would have 137 members over the age of 70 on December 1, 2024, a new record.
GEORGIA STATE・2 HOURS AGO
Business Insider

The Supreme Court will hear arguments on a lawsuit that blocked student-debt relief in February. Biden asked for the same treatment with another case.
TEXAS STATE・1 DAY AGO