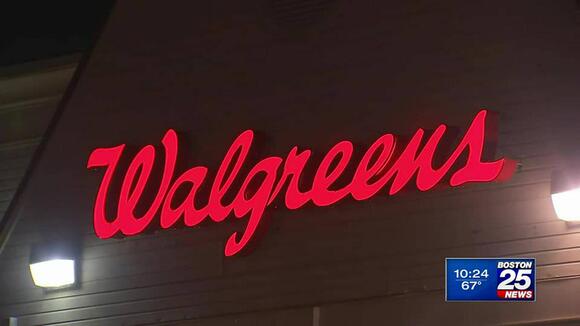 CAMBRIDGE -- Walgreens customers like Heidi Gitelman were frustrated to learn a couple of their pharmacies in Cambridge closed without warning.

“I couldn’t believe it was closed, like I really had to do a double take, but then I went to the manager of the Walgreens and I asked him what happened,” said Gitelman. “And he was like almost shaking, he was really nervous and upset and he just said ‘we have a staff shortage.”

Walgreens says their pharmacies on River Road and Mass Ave in Cambridge were forced to close for three days over the last week because of staffing issues.

Even when they reopened, their website and phone messages still said they were closed, which led to some confusion.

“I knew that that pharmacist was coming back after the time that my family member needed their medication, so I was super concerned and you could tell he was concerned,” said Gitelman.

“I see it as part of the overall economic crisis we’re in,” said Rep. Mike Connolly, who was made aware of the issue Monday.

Rep. Connolly says he reached out to Walgreens himself.

“They’re sharing pharmacists through their network, and so they’re finding out the night before in some cases whether or not they’ll have a pharmacist the next day, and really I think from a public health standpoint that just isn’t tenable,” said Rep. Connolly.

“We apologize for the inconvenience and thank our patients and customers in Cambridge for their patience as we worked to safely reopen our pharmacies located at 625 Massachusetts Ave. and 330 River Rd. Our teams are in the process of updating the website and phone messages to reflect that both locations are currently open. Each experienced temporary closures on 9/21 and 9/22 and 9/25 due to staffing issues related to the national pharmacist shortage.

In communities impacted by staffing shortages, we adjust hours of operation with the goal of creating minimal disruption for customers and patients. In such instances, we will direct customers to other nearby Walgreens locations for prescription needs, care and support. Adjusted store hours are reflected on the store locator, which is updated throughout the day at Walgreens.com/FindaStore and on the Walgreens mobile app. Customers who have questions about their medications can also talk to a Walgreens pharmacist using the Pharmacist Video Chat feature available 24/7 on Walgreens mobile app and website.”

“It isn’t a straightforward process of transferring the prescription particularly if the prescription was filled, but you haven’t picked it up yet, then the pharmacy closes,” said Rep. Connolly. “When it comes to things like insurance payments and stuff like that, that can be a complete nightmare.”

BOSTON — An overnight fire has displaced five adults and 11 children in Dorchester. The fire broke out at a home on Lucerne Street, and was quickly extinguished by firefighters. According to the Boston Fire Department the fire happened around 4 a.m. There are no injuries to report. The...
BOSTON, MA・1 DAY AGO
Boston 25 News WFXT

BOSTON — Federal prosecutors have charged a Texas man with threatening a Boston physician who cares for transgender children. Thirty-eight-year-old Matthew Jordan Lindner of Comfort, Texas, faces a charge of transmitting interstate threats. He was arrested Friday in Texas by the FBI and is expected to appear in federal court in Massachusetts at a later date.
BOSTON, MA・11 HOURS AGO
Boston 25 News WFXT

Mass. man to pay for his grandchildren’s education after winning big lottery prize

NORWOOD, Mass. — A Massachusetts man plans to pay for his grandchildren’s education after recently winning a big lottery prize on a scratch ticket he bought at a grocery store. Medi Pulaha, of Norwood, won a prize of $4 million on the “$4,000,000 Spectacular” instant ticket game....
NORWOOD, MA・1 DAY AGO
Boston 25 News WFXT

WORCESTER, Mass. — Police are investigating an early morning crash in Worcester that leaves two dead and others with serious injuries. Police responded to the crash in the area of 982 Grafton Street just before 12:30 a.m. on Saturday. There is no word on how many occupants were in...
WORCESTER, MA・11 HOURS AGO
Boston 25 News WFXT

‘Represents the very best in all of us’: Weymouth bridge dedicated to fallen officer Chesna

A bridge spanning a major Weymouth highway will bear the name of an officer that died in the line of duty just over four years ago. Governor Charlie Baker, MassDOT and Weymouth town officials were among those on hand for the official dedication of The Sergeant Michael C. Chesna First Responders Bridge on Saturday. The bridge, which carries Route 18 over the MBTA Old Colony Railroad, was recently completed as part of a $78 million reconstruction project.
WEYMOUTH, MA・4 HOURS AGO
Boston 25 News WFXT

LINCOLN, R.I. — A massive late-night fire broke out at a furniture store in Lincoln, RI. Firefighters responded to the scene of Knock on Wood Furniture Store on Lonsdale Avenue around 11:30 p.m. Upon arrival, fire officials saw the building has engulfed into flames with smoke coming out of...
LINCOLN, RI・1 DAY AGO
Boston 25 News WFXT

William and Kate visit startup in Somerville, non-profit in Chelsea on 2nd day of Mass. trip

SOMERVILLE, Mass. — The royals woke up in Boston Thursday with a packed schedule that included stops in Somerville and Chelsea. Their trip to the Bay State all about the environment—and at Greentown Labs, in Somerville, the Prince and Princess of Wales learned about climate innovations. Less than...
SOMERVILLE, MA・2 DAYS AGO
Boston 25 News WFXT

MANCHESTER, New Hampshire — A 45-year–old man from North Carolina was seriously injured in a single-vehicle crash on Elm Street early Saturday morning, police said. At 12:53 a.m., police responded to the area of the north end of Elm Street for reports of a motor vehicle crash. A...
MANCHESTER, NH・11 HOURS AGO
Boston 25 News WFXT

WORCESTER, Mass. — A fatal crash that killed two in Worcester early Saturday morning occurred after the driver of the vehicle sped away from a police stop, according to the Worcester Police Department. Two of the seven occupants of a Toyota Highlander involved in a pedestrian altercation were pronounced...
WORCESTER, MA・3 HOURS AGO
Boston 25 News WFXT

ACTON, Mass — Acton police have located the missing 83-year-old man. Huanlu Wang was last seen leaving his home on Sachem Way in Acton on foot at noon on Friday, December 2. Wang is known to walk the Bruce Freeman Rail Trail and to travel long distances from his home at times.
ACTON, MA・15 HOURS AGO
Boston 25 News WFXT

Manchester Police warning the public after rise in gun thefts

MANCHESTER, N.H. — Authorities are warning the public to lock their car doors after “an alarming number” of gun thefts have been reported this year. Manchester Police say 73 guns have been stolen since the start of 2022, with 43 of them taken from vehicles. “These guns...
MANCHESTER, NH・2 DAYS AGO
Boston 25 News WFXT

BOSTON — Two men have been charged in federal court in Boston in connection with the November 17, armed bank robbery of the Rockland Trust bank on Martha’s Vineyard. According to the charging documents, on the morning of Nov. 17, three masked and armed individuals forced their way into the rear door of the Rockland Trust bank in Tisbury wearing dark-colored clothing and matching white masks that resembled an elderly man with exaggerated facial features.
BOSTON, MA・1 DAY AGO
Boston 25 News WFXT

STOUGHTON, Mass. — Authorities are investigating after a multicar crash in Stoughton Friday afternoon was caused by a bullet-riddled vehicle that may have been involved in a crime scene, according to officials. Stoughton Police say they responded to Park Street in front of the RK Plaza around 1:45 p.m....
STOUGHTON, MA・1 DAY AGO
Boston 25 News WFXT

QUINCY, Mass. — A Quincy man is under arrest for driving 50 yards with an Asian man on the hood of his car and hurling racial slurs at him, authorities say. John Sullivan, 77, of Quincy was charged with a civil rights violation, assault and battery with a dangerous weapon (motor vehicle), reckless operation of a motor vehicle and leaving the scene of an accident with personal injury.
QUINCY, MA・1 DAY AGO
Boston 25 News WFXT

BOSTON — Prince William and Princess Catherine are preparing for the third and final day of their much-watched visit to Boston. The Royal couple will wrap up their trip Friday as hosts of the Earthshot Prize ceremony at the MGM Music Hall. Earlier in the day, Princess Catherine will...
BOSTON, MA・2 DAYS AGO
Boston 25 News WFXT

MANCHESTER, NH — Manchester police are looking to identify three men involved in the theft of $17,000 worth of apple watches. The watches were stolen from the Best Buy on South Willow St last month. The suspects pulled more than 50 apple watches and put them in plastic bags.
MANCHESTER, NH・2 DAYS AGO
Boston 25 News WFXT

‘Hanging up my apron’: Beloved Boston restaurant closing after more than 40 years

BOSTON — A beloved restaurant in Boston will close its doors later this month after more than 40 years of business. Ristorante Fiore, a North End staple on Hanover Street, is slated to serve up its final meals on Dec. 25, 2022, an announcement on Facebook indicated. “It has...
BOSTON, MA・2 DAYS AGO
Boston 25 News WFXT

Police investigating after a weapon was discovered in students bag at elementary school in Barre, MA

BARRE, Mass. — Authorities are investigating an incident at the Ruggles Lane School in Barre, Mass. after a weapon was discovered in a student’s backpack on Thursday. Following the start of the school day, a weapon was found in the personal possessions of a K-5 student. Upon discovery of that weapon by school personnel, the student’s classroom was immediately cleared, the weapon was personally secured by the building Principal, and the Barre Police Department was immediately notified and dispatched to Ruggles Lane to take possession of the weapon, according to police.
BARRE, MA・2 DAYS AGO
Boston 25 News WFXT

BOSTON — A 33-year-old man has died after he fell from an elevated roadway onto a ramp near the Ted Williams Tunnel near Logan Airport in East Boston on Friday night, state police said. A preliminary investigation found that around 7:30 p.m., the man exited a vehicle that was...
BOSTON, MA・9 HOURS AGO