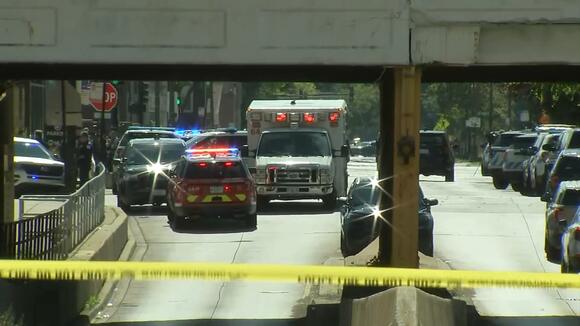 The question of how someone could breach security at the Chicago Police Department's Homan Square facility is complicated by the importance of the facility to CPD's citywide operation. Some of the most important and sensitive police units operate out of that building including SWAT, the Bureau of Organized Crime, and sensitive undercover units. Security experts told the I-Team that an intruder waltzing in from the outside is not just a problem, it could be a deadly problem. "You would have had a bunch of defenseless SWAT officers as targets," said Ed Farrell, Silver Star Protection Group. READ MORE: Police shoot intruder inside Homan Square CPD facility, Supt. David Brown says Farrell, a former deputy U.S. Marshal in Chicago, spoke with the I-Team about the unthinkable outcome of what could have happened Monday at CPD's uber-sensitive west side facility. Farrell has been there hundreds of times during his years as a top federal lawman in Chicago. "You have to either be with Chicago police officer or get checked in with a purpose to be there. There are evidence and vaults where they could have guns, weapons, narcotics, things of that nature," said Farrell. "There's a ton of sensitive information sensitive units and or covert units that they wouldn't want exposure to so the security in that building is generally very tight.". But on Monday, it wasn't. Now, Chicago police officials are left to consider the thought of what if? What if the intruder arrived with his own weapons? "It shows that there was a security overlook," said Farrell. "So obviously they need to revisit their security protocols to make sure this does not happen again." Farrell believes this was a fluke and not a systemic failure. Considering the potential outcome of such a breach, CPD and City Hall may consider themselves fortunate if indeed it was a one-off and not a sign of a larger problem such as a staffing shortage. "I actually think this was just a culmination of mistakes," Farrell said. "Again, I think this is a one off it's not common. You got to imagine, there's over 20 police districts and other facilities. This is the first break-in I can remember in my entire 27 years since I started in law enforcement." Farrell said such a breach almost never happens and he says can actually be easily fixed. If that fire escape door is locked, the problem goes away or in a secure building if a door has to be propped open, then a security officer needs to be there to control access and prevent what happened Monday.

There's a push to get guns of all kinds off the street in Chicago and there's money, on the line.
CHICAGO, IL・8 HOURS AGO
ABC 7 Chicago

Santa wasn't the only one looking to spread a little holiday cheer during the 17th annual "Shop with a Cop."
CHICAGO, IL・22 HOURS AGO
ABC 7 Chicago

There are more serious charges against a Maine teenager who's accused of plotting an ISIS-inspired attack on a mosque in Chicago.
CHICAGO, IL・1 DAY AGO
ABC 7 Chicago

On World AIDS Day, the Puerto Rican Cultural Center organized a march in Humboldt Park to remember those who have died from HIV-related complications.
CHICAGO, IL・22 HOURS AGO
ABC 7 Chicago

Red swastikas were spray painted on 16 tombstones and nearly two dozen more were defaced by other graffiti at a Jewish cemetery n Waukegan.
WAUKEGAN, IL・1 DAY AGO
ABC 7 Chicago

A Chicago woman said her daughter was robbed at gunpoint by a group of men who tried to take her vehicle.
CHICAGO, IL・23 MINUTES AGO
ABC 7 Chicago

The Will County Sheriff's Office said three people are in critical condition in an apparent violent attack in a home in unincorporated Crete Thursday evening.
WILL COUNTY, IL・5 HOURS AGO
ABC 7 Chicago

A 15-year-old boy was shot and killed on the South Side Tuesday night, hours after another teen was wounded, Chicago police said.
CHICAGO, IL・2 DAYS AGO
ABC 7 Chicago

A man was stabbed on a CTA train on the city's North Side, Chicago police said.
CHICAGO, IL・3 DAYS AGO
ABC 7 Chicago

Court documents show there was a history of violent threats Andrei Kisliak made to his wife Vera Kisliak.
BUFFALO GROVE, IL・8 HOURS AGO
ABC 7 Chicago

A Chicago police squad car was struck by a Jeep in the South Loop Tuesday night.
CHICAGO, IL・2 DAYS AGO
ABC 7 Chicago

A Chicago woman said her daughter was robbed at gunpoint Tuesday, by a group of men who tried to take her vehicle.
CHICAGO, IL・2 DAYS AGO
ABC 7 Chicago

Retired couple stabbed by son-in-law who may have been angry about divorce, authorities say

Authorities said the suspect may have been angry about his divorce from the victims' daughter. He was due to report to jail Friday for domestic battery.
WILL COUNTY, IL・10 MINUTES AGO
ABC 7 Chicago

Chicago police announced Tuesday charges in the fatal shooting of a 12-year-old girl who died while celebrating her birthday last March.
CHICAGO, IL・3 DAYS AGO