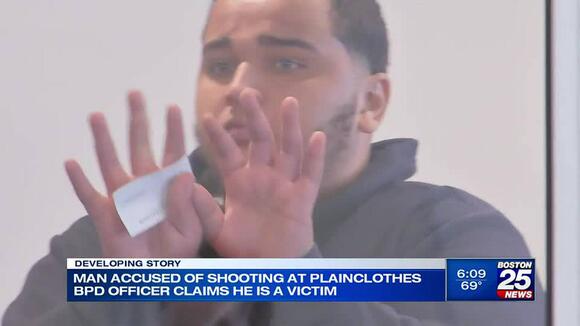 Boston - The man who Boston police say shot at them told a judge he was the one being shot at. The police report says investigators did track down a gun. They also did a gunshot residue test on the suspect’s hands but it may have been too late.

Alberto Polanco is charged with shooting out the back window of an unmarked Boston police car while a plain clothes officer was inside.

People who live there were thankful their children were not outside.

“Sometimes the kids are right here,” the witness said.

The city’s shot spotter picked up the gunfire just after 6 pm Sunday night. The officer was not hit and was able to radio in a description of the shooter. Prosecutors say a short time later they were able to identify the shooter as 20 year-old Alberto Polanco and located him at his home about a half a mile away. In the police report, investigators say they tested Polanco for gunshot residue but believe he took a shower.

“He was wet and appeared to have showered,” the prosecutor said.

According to the district attorney’s office, police seized a Glock .22-cal pistol and ammunition from the apartment.

“This could have easily ended up being a far more tragic situation, with the officer or bystanders hit by bullets so carelessly and dangerously fired on an early Sunday evening. Luckily that didn’t happen, but this is another reminder of how our neighborhoods are threatened by illegal guns and the people who use them,” DA Kevin Hayden said in a statement.

Polanco’s attorney told us off camera his client never met this officer and that Polanco thought someone was shooting at him. “There are certain issues with this case, my client, if you read the police report, says that he was the victim, that he was being shot at,” the defense attorney said.

Several people were in court for Polanco but would not comment about the case after. Over at Polanco’s apartment in Roxbury, police were still waiting for a warrant to search the apartment where the arrest was made. According to the police report a black Glock handgun was seized at some point during the investigation.

Polanco’s attorney has asked for the surveillance video and the gunfire residue tests. The suspect is being held without bail until the case returns to court on Thursday.

here we go now he is the victim lol. Shooting in a residential area most likely with a unregistered or stolen fire arm

still doesn't have the right to b carrying a firearm in the first place!

Police investigating after a weapon was discovered in students bag at elementary school in Barre, MA

BARRE, Mass. — Authorities are investigating an incident at the Ruggles Lane School in Barre, Mass. after a weapon was discovered in a student’s backpack on Thursday. Following the start of the school day, a weapon was found in the personal possessions of a K-5 student. Upon discovery of that weapon by school personnel, the student’s classroom was immediately cleared, the weapon was personally secured by the building Principal, and the Barre Police Department was immediately notified and dispatched to Ruggles Lane to take possession of the weapon, according to police.
BARRE, MA・21 HOURS AGO
Boston 25 News WFXT

DARTMOUTH, Mass. — Two men are facing criminal charges in connection with an incident in Dartmouth that triggered an Amber Alert and a frantic search for a mother and baby boy on Thursday, officials said. Officers responded to Tucker Road just before 11:30 a.m. for reports of several people...
DARTMOUTH, MA・20 HOURS AGO
Boston 25 News WFXT

BOSTON — Two men have been charged in federal court in Boston in connection with the November 17, armed bank robbery of the Rockland Trust bank on Martha’s Vineyard. According to the charging documents, on the morning of Nov. 17, three masked and armed individuals forced their way into the rear door of the Rockland Trust bank in Tisbury wearing dark-colored clothing and matching white masks that resembled an elderly man with exaggerated facial features.
BOSTON, MA・4 HOURS AGO
Boston 25 News WFXT

MARSHFIELD, Mass. — 25 Investigates has obtained a copy of 27-year-old Christopher Keeley’s criminal court record in Massachusetts. A warrant has been issued for Keeley for the murder of Carl and Vicki Mattson, a Marshfield couple in their 70′s. Plymouth County District Attorney Tim Cruz said both were found “bludgeoned and stabbed” when police conducted a wellness check at their home Tuesday evening.
MARSHFIELD, MA・1 DAY AGO
Boston 25 News WFXT

An Amber Alert is in effect after a mother and her baby boy were kidnapped from a home in Dartmouth on Thursday, officials said. Jeremias R. Cabral, 21, of Fall River allegedly abducted his ex-girlfriend 23-year-old Hannah Benson and her 6-month-old son, Grayson, at knifepoint, according to Massachusetts State Police.
DARTMOUTH, MA・1 DAY AGO
Boston 25 News WFXT

BOSTON — An overnight fire has displaced five adults and 11 children in Dorchester. The fire broke out at a home on Lucerne Street, and was quickly extinguished by firefighters. According to the Boston Fire Department the fire happened around 4 a.m. There are no injuries to report. The...
BOSTON, MA・9 HOURS AGO
Boston 25 News WFXT

State police: Suspect who prompted Amber Alert in custody, mother and her baby boy being evaluated

DARTMOUTH, Mass. — An alleged kidnapping suspect who state police say abducted his former girlfriend and her baby boy from a home in Dartmouth on Thursday has been taken into custody. Jeremias R. Cabral, 21, of Fall River, allegedly abducted his ex-girlfriend, 23-year-old Hannah Benson, and her 6-month-old son,...
DARTMOUTH, MA・1 DAY AGO
Boston 25 News WFXT

FALL RIVER, Mass. — Two men were arrested on back to back days for their alleged involvement in a shooting that left a man seriously injured in Fall River. 24-year-old Gilberto Velazquez-Arce was charged with carrying a firearm without a license, accessory after the fact (assault and battery with a firearm), carrying a loaded firearm in public without a license to carry, and discharging a firearm within 500 feet of a dwelling.
FALL RIVER, MA・2 DAYS AGO
Boston 25 News WFXT

BOSTON (AP) — A former co-owner of a Massachusetts compounding pharmacy at the center of a nationwide fungal meningitis outbreak that resulted in more than 100 patient deaths has been sentenced to a year in prison for conspiring to defraud the federal government. Gregory Conigliaro, 57, as the vice...
MASSACHUSETTS STATE・5 HOURS AGO
Boston 25 News WFXT

PLYMOUTH, Mass. — A young man is under arrest for allegedly spray painting a Plymouth business on Tuesday. Damien Oehme, 19, of Plymouth, was charged with vandalizing property and resisting arrest. Plymouth Police say a DPW employee spotted Oehme spray painting “ADAPT OR GET CLAPPED” on a business in...
PLYMOUTH, MA・2 DAYS AGO
Boston 25 News WFXT

MANCHESTER, NH — Manchester police are looking to identify three men involved in the theft of $17,000 worth of apple watches. The watches were stolen from the Best Buy on South Willow St last month. The suspects pulled more than 50 apple watches and put them in plastic bags.
MANCHESTER, NH・1 DAY AGO
Boston 25 News WFXT

Police are investigating the death of a Beverly woman after her body was found in a Salisbury river, away from her abandoned vehicle left on Route 95 South. According to a statement from Massachusetts State Police, troopers first found the abandoned vehicle parked just south of the Whittier Bridge in Newburyport at 11:20 a.m. After using personal items to identify the owner of the car as a 70-year-old Beverly woman, police checked her listed address but she was not home either.
BEVERLY, MA・2 DAYS AGO
Boston 25 News WFXT

LINCOLN, R.I. — A massive late-night fire broke out at a furniture store in Lincoln, RI. Firefighters responded to the scene of Knock on Wood Furniture Store on Lonsdale Avenue around 11:30 p.m. Upon arrival, fire officials saw the building has engulfed into flames with smoke coming out of...
LINCOLN, RI・9 HOURS AGO
Boston 25 News WFXT

CHELSEA, Mass. — People who waited in Chelsea to catch a glimpse of the Royal Highnesses got more than a quick look. The Prince and Princess spent a good amount of time talking to people in the crowd. The crowd started building early Thursday morning outside Roca, a violence...
CHELSEA, MA・23 HOURS AGO
Boston 25 News WFXT

Acton man dies weeks after being injured in motorcycle crash

ACTON, Mass. — A man has passed away as a result of injuries sustained during a motorcycle crash in Acton on October 31st. Acton Police say the crash happened on Great Road around 12:00 p.m. when a Subaru Forester traveling eastbound and a motorcycle traveling westbound collided. The driver...
ACTON, MA・2 DAYS AGO
Boston 25 News WFXT

Mass. man to pay for his grandchildren’s education after winning big lottery prize

NORWOOD, Mass. — A Massachusetts man plans to pay for his grandchildren’s education after recently winning a big lottery prize on a scratch ticket he bought at a grocery store. Medi Pulaha, of Norwood, won a prize of $4 million on the “$4,000,000 Spectacular” instant ticket game....
NORWOOD, MA・3 HOURS AGO
Boston 25 News WFXT

BOSTON — Next week marks National Influenza Vaccination Week -- a time to remind Americans it’s not too late to get a flu shot. In fact, the CDC’s Flu Tracker map would suggest there’s no time to waste. In the last two weeks, the number of states with ‘high’ or ‘very high’ flu activity went from 20 to 32. That’s a 60 percent increase. Massachusetts remains in the ‘moderate’ activity bracket, for now. Local hospitals can only hope it stays that way -- given how slammed they’ve been with various respiratory illnesses for weeks.
BOSTON, MA・23 HOURS AGO
Boston 25 News WFXT

‘Hanging up my apron’: Beloved Boston restaurant closing after more than 40 years

BOSTON — A beloved restaurant in Boston will close its doors later this month after more than 40 years of business. Ristorante Fiore, a North End staple on Hanover Street, is slated to serve up its final meals on Dec. 25, 2022, an announcement on Facebook indicated. “It has...
BOSTON, MA・1 DAY AGO
Boston 25 News WFXT

MEMA: Thousands of people across Massachusetts without power after storm hit

BOSTON — A strong storm left nearly 50,000 customers without power in Massachusetts Wednesday night. Just after 9:40 p.m. more than 44,000 customers had lost power across the state, according to MEMA. In Quincy, more than 55% of power customers were in the dark around 9:30 p.m., according to...
MASSACHUSETTS STATE・1 DAY AGO