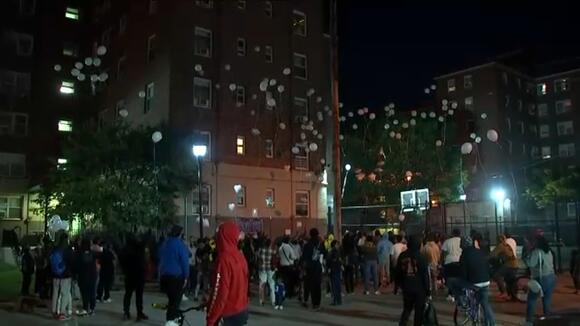 Police in Hoboken are investigating the murder of a man who was gunned down on a local basketball court over the weekend. Officers responded to a call around 3:30 a.m. Sunday about a shooting near Marshall Drive between 5th and 6th streets. When they arrived, they found 28-year-old Christopher Garcia with a gunshot wound to his torso. He was rushed to Jersey City Medical Center, where he was pronounced dead less than an hour later. "You wouldn't know he was born with a hole in his heart, because his heart was big and the love he gave was real," his girlfriend, Lynese Garcia, said. She planned her future around the love of her life, but now, she and hundreds of friends are holding onto one another, comforting Garcia's parents, sister and three brothers. Just hours after news spread of his death, a vigil was held outside his home on Jefferson at 11th Street. Dozens of white balloons were released Monday night followed by a heated lantern covered with signatures from grieving friends. Ric Selleck was his best friend since their teenage years. "He had this ability to do anything," he said. "Whatever he wanted to commit to, he could do it. And whether it was doing T-shirts or leading community events or helping anybody out that he could help, and just bringing a smile, laughter, a fun personality that lit up a room. He was someone you wanted to be around." Garcia hosted a community event in July that Selleck said brought hundreds of people out and included giving bikes and toys to children. "When stuff got tough, Hoboken stepped up, and Chris was one of those kids that was going to step up for Hoboken," Selleck said. "So we got his back, we love him, and we're not going to forget him." Garcia was building his own business as a clothing designer, and he loved Hoboken and hoped to build a legacy of giving that his friends and family say they vow to carry out in his name. "I know that God will turn his pain, our pain, into purpose," Garcia said. Hoboken Mayor Ravi Bhalla offered his condolences to Garcia's family in a statement on Twitter. "The entire community in Hoboken is deeply saddened by the tragic death of Chris Garcia last night," the statement read. "Words cannot describe the suffering of a family from the loss of a young man in Chris. Our prayers are with his family and we are here to support Chris' family in any way possible as they grieve his loss. May his memory stay with us always as we keep him and his family in our prayers." Since 2013, there have only been three homicides in Hoboken, the most recent being in August of 2020. No arrests have been made so far, and anyone with information is urged to contact the Hudson County Prosecutor's Office at 201-915-1345 or visit their website to leave an anonymous tip . All information will be kept confidential. ALSO READ | '2 Milligrams: Fatal Dose': The crisis of fentanyl, America's hidden killer

In '2 Milligrams: Fatal Dose', Eyewitness News 7 On Your Side Investigative reporter, Dan Krauth, got unprecedented access to show you the tools your family can use to help save the lives of loved ones.

Good Samaritan saves woman who was pushed onto subway tracks in Brooklyn: Police

A good Samaritan rescued the woman from the tracks in Brooklyn.
BROOKLYN, NY・10 HOURS AGO
ABCNY

Police: 16-year-old stabbed by another teen during dispute inside Staten Island Mall

The victim was stabbed in the abdomen just before 8 p.m. by a 16-year-old male suspect, who has since been taken into custody by police. Charges are currently pending.
STATEN ISLAND, NY・19 HOURS AGO
ABCNY

Three people were injured in an overnight house fire in the Morrisania neighborhood of the Bronx.
BRONX, NY・1 DAY AGO
ABCNY

Police are searching for a man wanted for the alleged kidnapping attempt of a child aboard a subway train in Midtown on Wednesday.
MANHATTAN, NY・2 DAYS AGO
ABCNY

Police say he has struck six times in the last month - though in two cases he got nothing.
QUEENS, NY・1 DAY AGO
ABCNY

Two people, a 20-year-old woman and a 60-year-old man have died. Two other women remain in critical condition.
BRONX, NY・2 DAYS AGO
ABCNY

The fire started at the home on Gardner Avenue in Hicksville at 11:30 a.m. Friday.
HICKSVILLE, NY・20 HOURS AGO
ABCNY

Teen hospitalized after being shot in the Bronx

It happened just before 2:30 p.m. Thursday on East 225th Street and Schieffelin Ave in Edenwald.
BRONX, NY・1 DAY AGO
ABCNY

Passenger on flight from JFK accused of bring razor on plane, holding it near woman's neck

The woman says the man was sitting next to her when he put the blade inches from her throat and told her to pause her movie.
NEW YORK CITY, NY・2 HOURS AGO
ABCNY

Riders who were lucky enough stumbled upon the celebration during Tuesday night's rush hour.
BROOKLYN, NY・1 DAY AGO
ABCNY

The victim is the third driver this week to crash after being fatally shot in New York City.
NEW YORK CITY, NY・2 DAYS AGO
ABCNY

In 2020, the Tunnel to Towers Foundation paid off the mortgage on Det. Veve's family home that he shares with his wife and daughter -- now they are going a step further.
BROOKLYN, NY・3 DAYS AGO
ABCNY

Several people were injured, including four firefighters, after a fire broke out a home in the Bronx Wednesday.
BRONX, NY・2 DAYS AGO
ABCNY

The Park Slope tree lighting ceremony will happen at the 4th Street Plaza on the corner of 5th Avenue.
BROOKLYN, NY・3 HOURS AGO
ABCNY

The victim is a 64-year-old woman, police said.
QUEENS, NY・1 DAY AGO
ABCNY

They hoisted the man to safety as a train was nearing the station.
MANHATTAN, NY・20 HOURS AGO
ABCNY

A 24-year-old driver was arrested in Queens after fatally crashing with a motor scooter Saturday morning.
QUEENS, NY・5 HOURS AGO
ABCNY

Gridlock alerts have already been issued in New York City for several days as we head towards the busy holiday season, but traffic is expected to get worse after a new plan was unveiled to close more streets to traffic in December.
NEW YORK CITY, NY・3 DAYS AGO
ABCNY

"I know the situation is making it difficult for many on this Thanksgiving but I thank residents for their patience," Hoboken's mayor tweeted.
HOBOKEN, NJ・2 DAYS AGO