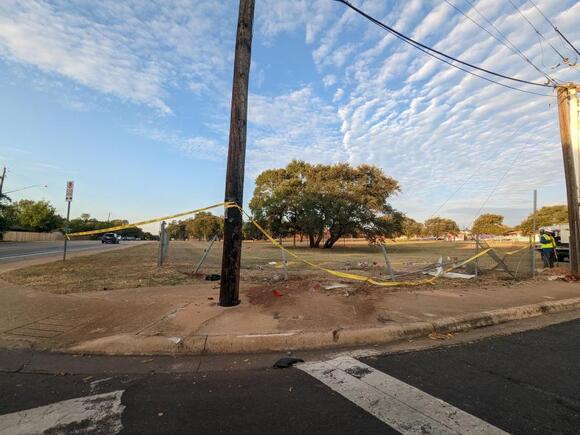 AUSTIN (KXAN) — A vehicle hit a pole near a northwest Austin school early Monday morning, knocking out power to the campus and nearby neighborhood, according to Austin Energy .

The utility said the neighborhood has power back now, but crews are still working to restore energy to Summitt Elementary School . Austin Energy estimated it will be at least until noon until the school gets power back.

Crews responded at 2:30 a.m. after the pole was struck just before 1 a.m. at the corner of Amherst and Cassady Drives, Austin Energy said. Crews had to hoist up a new pole as a result.

The utility’s outage map shows the outage is still affecting 84 customers in the area as of 9 a.m. Monday. Originally, 300 customers were without power because of the crash.

This is a developing story; stick with KXAN for updates.

No one was hurt after a car crashed into a condominium building near Burnet Road early Wednesday morning.
AUSTIN, TX・2 DAYS AGO
KXAN

A 65-year-old man died on Sunday nearly two weeks after he was hit by an SUV on W. Wells Branch Pkwy.
AUSTIN, TX・2 HOURS AGO
KXAN

The new site is an effort to have more space for production and to eliminate the commute to and from Austin for employees, said Keri Westland, chief administrative officer for Carr Lane.
ELGIN, TX・1 DAY AGO
KXAN

Austin-Travis County EMS said one adult was pronounced dead at the scene at 10:31 p.m.
AUSTIN, TX・2 DAYS AGO
KXAN

Several Austin ISD schools and the district's Central Office are without power Wednesday morning, but school operations are carrying on.
AUSTIN, TX・2 DAYS AGO
KXAN

An Austin man was arrested and charged Monday in connection to an east Austin incident after a 911 caller said the man was on the hood of the caller’s car and banging on the windshield with a knife.
AUSTIN, TX・2 DAYS AGO
KXAN

Police posted at 7:25 p.m. on their Facebook page that the store and area around it were cleared and nothing was found.
BASTROP, TX・22 HOURS AGO
KXAN

What is a water key? And why can it save you in the next freeze

This week, the City of Austin began giving out winter weather supplies, but one tool that's going fast could save your home: water keys.
AUSTIN, TX・23 HOURS AGO
KXAN

Austin’s largest permanent housing development for folks coming out of homelessness has brought back its annual Christmas celebration, the Community First! Village of Lights.
AUSTIN, TX・9 HOURS AGO
KXAN

Depending on where you are in Central Texas, your 911 call could be sent to the wrong dispatch center. These problems with emergency calls can happen to people who are near a county line.
DRIPPING SPRINGS, TX・2 DAYS AGO
KXAN

The University of Texas Austin Police Department is seeking information about an attempted robbery that happened off campus Wednesday.
AUSTIN, TX・21 HOURS AGO
KXAN

Texas band’s trailer stolen with gear, instruments and it was caught on video

An Austin band gearing up to hit the road for a show is now on the search for their gear.
AUSTIN, TX・2 DAYS AGO
KXAN

Body found in Williamson County identified as man who disappeared, was last seen at Domain

A body that was found in Williamson County could belong to a man who went missing a month ago, authorities say.
WILLIAMSON COUNTY, TX・1 DAY AGO
KXAN

Fog, drizzle to return ahead of Saturday morning cold front

Why a possible railroad strike has Central Texas truckers worried

The Texas Trucking Association said a stop in rail services would immediately mean supply shortages and higher prices for things like food or chemicals for wastewater treatment.
ROUND ROCK, TX・2 DAYS AGO