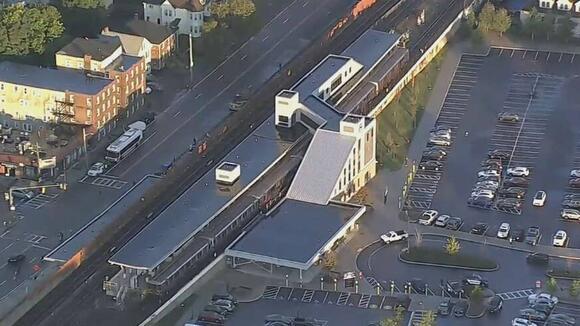 QUINCY, Mass. — Two people were found dead along the Red Line tracks that run through Quincy, prompting a stoppage of all train service on Monday morning, officials said.

Emergency crews responding to the northbound tracks in the area of Wollaston station around 6 a.m. found a man and woman dead at the scene, according to the Transit Police Department.

An investigation indicated that the victims trespassed and intentionally laid between the outside running rail and third rail, Transit police added.

Red Line service was suspended in both directions at 6:30 a.m. and delays remained in place for several hours. The MBTA said that regular service had resumed shortly before 1 p.m.

A heavy police presence could be seen in the area of Wollaston station as commuters waited to board shuttle buses that replaced train service between JFK/UMass and Braintree stations. The commuter rail also accommodated passengers at Braintree, Quincy Center, and JFK/UMass.

Transit police detectives and the Norfolk District Attorney’s Office are leading an investigation.

There were no additional details available.

This is a developing story. Check back for updates as more information becomes available.

Trains start running at around 5:15AM. Between 6-7AM it starts getting crowded with commuters going into Boston/Cambridge, students, etc. This branch of the Red Line is heavily used. Police say they deliberately lodged themselves in the confined space where the 3rd rail is located. It wasn't an accident, they committed suicide.

Police investigating after man struck, killed by car in Foxborough

Police are investigating after a man was fatally struck by a car at the Cocasset Street and Oak Street intersection in Foxborough on Saturday morning. According to a statement from police and the Norfolk Country DA’s office, officers responded to the intersection around 10:45 a.m. The victim, a Foxborough resident, was immediately transported to a Boston Area trauma center, however, he eventually succumbed to his injuries despite “tremendous effort” from the Fire Department and hospital staff.
FOXBOROUGH, MA・12 HOURS AGO
Boston 25 News WFXT

NEW BEDFORD, Mass. — A four vehicle crash sent eight people to the hospital, Friday night. The crash took place shortly after 7 p.m., on Route 195 westbound in New Bedford. Officials closed all lanes of the highway as a safety precaution due to “low-light conditions,” according to the Massachusetts State Police.
NEW BEDFORD, MA・1 DAY AGO
Boston 25 News WFXT

NEW BEDFORD, Mass. — Five adults, four children and three cats were displaced following a fire at a multi-family in New Bedford on Saturday morning, according to the fire department. No injuries were reported. Shortly before 5 a.m., several 911 calls were made reporting a structure fire at 14...
NEW BEDFORD, MA・13 HOURS AGO
Boston 25 News WFXT

One dead after car bursts into flames in crash on Mass. interstate

WESTPORT, Mass. — One person is dead after a crash on Interstate 195 in Westport, Massachusetts early Thanksgiving morning. According to police, just after 2 a.m., troopers and firefighters responded to a crash and car fire on the ramp from Interstate 195 West to Route 88 in Westport. Upon...
WESTPORT, MA・2 DAYS AGO
Boston 25 News WFXT

BOSTON — A Boston man is facing charges in connection to an indecent assault and battery at the Copley Square MBTA Station in Boston. According to Transit Police, officers responded to the MBTA’s State Street Station on Wednesday night just after 4 p.m. and met with a woman who said she was assaulted at the Copley station.
BOSTON, MA・1 DAY AGO
Boston 25 News WFXT

CAMBRIDGE, Mass. — A Cambridge resident is warning others to be extra wary of package thieves after his Black Friday delivery was snatched less than an hour after arriving on his front doorstep. It happened on Chauncy Lane in the morning hours on Friday. The theft comes days after...
CAMBRIDGE, MA・1 DAY AGO
Boston 25 News WFXT

LOWELL, Mass. — On Friday, Lowell Police said they have arrested 21-year-old Rafael Garcia-Rey, who was wanted in connection with a deadly shooting in Lowell. Investigators said on November 15 Garcia-Rey shot and killed 26-year-old Odogwu Ganobi to death following an argument about a traffic dispute in the area of Maitland Avenue and Chelmsford Street.
LOWELL, MA・1 DAY AGO
Boston 25 News WFXT

HINGHAM, Mass. — Police launch an investigation after they located the body of a missing person inside Bare Cove Park in Hingham on Thursday. There is no sign of foul play or suspected danger to the public, according to police. The Office of the Chief Medical Examiner is conducting an autopsy to determine the cause of death.
HINGHAM, MA・2 DAYS AGO
Boston 25 News WFXT

NASHUA, NH — Nashua Police are investigating a hit-and-run that injured three people. Police were called to the scene for a motor vehicle pedestrian crash at 119 Main Street around 11:40 p.m. Three people were struck by the vehicle and taken to local hospitals, police say. One person sustained...
NASHUA, NH・2 DAYS AGO
Boston 25 News WFXT

AG: The death of 83-year-old in Lyndeborough, NH ruled a homicide by blunt force trauma

LYNDEBOROUGH, N.H. — An autopsy for the 83-year-old man who was found dead under suspicious pretenses in Lyndeborough, NH has been completed, according to New Hampshire Attorney General John M. Formella. Robert Prest was found shot to death at his Center Road home on Wednesday. According to the medical...
LYNDEBOROUGH, NH・1 DAY AGO
Boston 25 News WFXT

LEOMINSTER, Mass — A missing 73-year-old woman who walked away from assisted living in Leominster has been found, state police said Saturday afternoon. State Police said Pamela Vaughan walked away from Village Rest Home in Leominster at 4 p.m., on Friday. She is described as being 5′02″ and weighting...
LEOMINSTER, MA・14 HOURS AGO
Boston 25 News WFXT

Arriving in style: Santa comes to town in a helicopter

Santa arrived in Quincy Saturday. Not on reindeer back or flying sleigh but by helicopter. Families packed Pageant Field to get a rare glimpse of Ol Saint Nick in the skies. “It’s so great to have a place to take our kids to see Santa,” said Jaclyn Smeaton. “So nice of Santa to visit from the North Pole.”
QUINCY, MA・7 HOURS AGO
Boston 25 News WFXT

QUINCY, Mass — Apple CEO Tim Cook was spotted in Quincy at ALBA Restaurant just days after a driver crashed into the Apple store killing one person and injuring 19 in Hingham. ALBA Restaurant posted on their Facebook page on Friday a photo of Leo Keka, the owner of...
QUINCY, MA・15 HOURS AGO
Boston 25 News WFXT

It may have been Small Business Saturday but there was nothing tiny about the crowds that flooded Boston’s Newbury Street. Many made use of the relatively mild November day to get some early Christmas shopping done. And whether, customers were shopping big or small, everyone made note that it was a busy November business day.
BOSTON, MA・7 HOURS AGO
Boston 25 News WFXT

‘Insane’: Heading to the Wrentham Outlets for Black Friday deals? You better pack your patience

Hanover man goes back to his roots, building family dinner tables out of reclaimed wood

HANOVER, Mass. — With no COVID restrictions for this first time heading into this holiday season, families will be returning to many traditions. That likely includes a meal around the dinner table. One local man is creating tables that can serve as the gathering spot for generations. Chris Benson’s...
HANOVER, MA・1 DAY AGO
Boston 25 News WFXT

A winter weather advisory has been issued for parts of New England due to freezing rain that’s causing slippery road conditions as Thanksgiving travelers begin to make the trek home on Friday. The advisory is in effect for parts of New Hampshire and Maine including Belknap, Merrimack, Northern Carroll,...
GRAFTON COUNTY, NH・1 DAY AGO
Boston 25 News WFXT

Hasselbeck legacy of family and football continues at Xaverian

The Hasselbecks have a long and special relationship with Xaverian Brothers High School Football and this season there were three Hasselbecks involved with the Hawks. Current QB: Henry Hasselbeck, coached by his dad Matt Hasselbeck and his grandfather Don Hasselbeck. Don was drafted by the Patriots and played 9 seasons...
WESTWOOD, MA・2 DAYS AGO