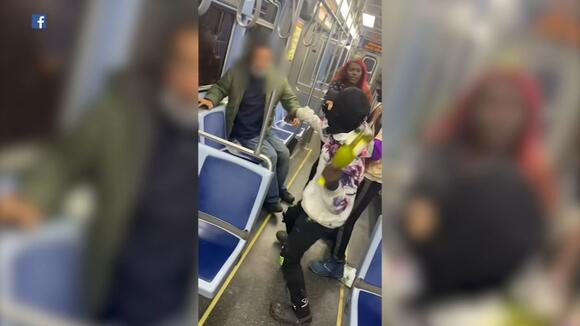 Horrifying moments were caught on camera on a CTA Red Line train when a man attacked and robbed after being hit in the head with a bottle. Video shows the suspects demanding the man's ID, then taking the victim's wine bottle and striking him in the head, leaving him bleeding in his seat. The incident happened early Sunday morning on the Red Line train near the 95th Street station, leaving TeShaun Terry - who recorded the violent confrontation - stunned on her way home. She said she went searching for help at the train station, but no one was around. "When I seen the blood I instantly felt so bad!" Terry said. "So, I instantly ... when the train stopped, I stopped the video and I ran upstairs to look for the operators. There were no operators! There were no security! There were literally no one!" Terry said the two men targeted a man who appeared to be asleep on the train. The CTA attack was caught on camera before two men are seen getting away with the victim's belongings. Chicago police shared photos of the two people they're looking for in the violent robbery around 3 a.m. No one is in custody. SEE ALSO | Chicago police release photos of suspects wanted in Loop armed robbery on CTA train The attack comes as the CTA and Chicago Police are pledging more patrols on the transportation system. In a statement, CTA officials said: "With regards to the use of K-9 security teams, there are currently 24 teams scheduled to patrol CTA properties at any given time, which complement more than 300 unarmed guards." Chicago police continue to search for the suspects, who Terry believes could strike again. "They told us, they said, 'That's how you rob a person! We do this all the time!'" Terry said. The CTA also touted a boost in ridership Monday, rising above 900,000 riders for the first time since before the pandemic. CTA officials went on to say it's impossible to have officers on every train and bus in the city. WATCH | Activists patrol CTA Red Line after violent robbery

Volunteers are stepping up to try and offer more security to CTA riders.

Activists patrolled the CTA Monday morning following the incident. They said they're fed up with all the violence on the CTA, so they took patrolling the rails into their own hands. People are scared. That's the sentiment among riders ABC7 spoke with at the 95th Street Red Line station. "Actually I have anxiety and it's really been getting to me, riding the train by myself," CTA rider Breann Carroll said. "It's just a lot and I kind of do fear for my life. But I don't really have another way to get to work, so what do you do?" "You try to go to work, pay your taxes and pay your bills, and this is what you have to go through?" Activist Bishop Anthony Scales said. "Every day? When is it going to change?" SEE ALSO | Photos show suspect wanted in shooting on Red Line train, Chicago police say A volunteer group of activists called the Untouchables are crime fighters in their 50s and 60s. They're trained in martial arts and some are former military members they said. They're riding the CTA trains in the early morning hours to keep people safe. "We ride from here all the way down to the end of the line at Howard. And we do it three times, come back and forth," activist Eric Lewis said. It's an attempt to protect the people of Chicago, they said, who are growing more concerned over their safety. "We'll be out here as long as it takes to curb the violence in the city because during the winter months it's going to get even worse and we're not standing for it," Lewis said. "Somebody's got to do it," Scales said. "If my nephew needs to ride those trains, I don't want anything to happen. I lost my son in '08. He got killed. So I know the power of not being able to do nothing. But I am going to stand up for what I believe. If I could help you, I'm going to do what I do." Anyone with information about this incident should call police at (312) 745-4443 or submit a tip anonymously at CPDTIP.com CTA Statement The Chicago Police Department (CPD) is the provider of law enforcement for the CTA, they are the best source for any information regarding the deployment of resources in light of this incident. With regards to the use of K-9 security teams, there are currently 24 teams scheduled to patrol CTA properties at any given time, which complement more than 300 unarmed guards. Due to reasons of security, we cannot provide specifics regarding the deployment of these resources, but 24 hours a day unarmed guards and unarmed K-9 teams patrol stations, as well as trains. More than 900,000 customers use CTA every day, and every effort is being made to provide a safer transit environment for both our customers and employees. On an average weekday, there are 2,300 train trips and nearly 18,000 bus trips. While there is broad, strategic coverage by officers and security guards, it is impossible to have officers on every train and bus, and at every facility all hours of the day.

This is why we haven’t been downtown Chicago in about 4 years. This is why my new neighbors are from downtown. Had to get away from uncontrollable violence in Chicago, this is why fewer people are working or visiting downtown. Just wait until Jan 1. Good luck.

A man was stabbed on a CTA train on the city's North Side, Chicago police said.
CHICAGO, IL・14 HOURS AGO
ABC 7 Chicago

A Chicago police squad car was struck by a Jeep in the South Loop Tuesday night.
CHICAGO, IL・2 HOURS AGO
ABC 7 Chicago

A group broke into a car dealer ship on the city's Northwest Side, Chicago police said.
CHICAGO, IL・19 HOURS AGO
ABC 7 Chicago

A Blue Island woman was charged with theft after Chicago police said she took a bag of money from an armored truck in the Edgewater neighborhood Monday afternoon.
CHICAGO, IL・14 HOURS AGO
ABC 7 Chicago

Chicago police said a woman tried to steal a bag of money from an armored truck parked outside a bank in Edgewater Monday.
CHICAGO, IL・17 HOURS AGO
ABC 7 Chicago

3 injured, 1 critically, in shooting and car crash on South Side, Chicago police say

Three people were injured in a shooting and crash on Chicago's South Side Monday afternoon, CPD said.
CHICAGO, IL・1 DAY AGO
ABC 7 Chicago

A man who lives nearby said he was working in his garage when he heard a noise and saw a UPS truck parked outside. After the truck left, he went out and saw the packages.
CHICAGO, IL・2 DAYS AGO
ABC 7 Chicago

Chicago police issue warning after series of armed robberies on North, Northwest Side

In each incident, a group of men approached the victims with weapons demanding their property.
CHICAGO, IL・4 DAYS AGO
ABC 7 Chicago

Two people were killed and two more were injured in a shooting at a South Side gathering, Chicago police said.
CHICAGO, IL・3 DAYS AGO
ABC 7 Chicago

A 14-year-old boy was shot Friday afternoon while on a ride-share bicycle in Jeffery Manor on the Far South Side.
CHICAGO, IL・4 DAYS AGO
ABC 7 Chicago

A false alert was to blame for an emergency landing at Chicago's O'Hare airport Monday.
CHICAGO, IL・4 HOURS AGO
ABC 7 Chicago

3 hurt, including cop, after fight over soccer game spills into street in Gold Coast

Five people are being questioned after a fight over a soccer game left three people hurt, including a Chicago police officer.
CHICAGO, IL・3 DAYS AGO
ABC 7 Chicago

The fight, which started inside Gold Coast Social over a soccer game, spilled into the street, the establishment's owner said.
CHICAGO, IL・2 DAYS AGO
ABC 7 Chicago

The crash took place just blocks away from the scene of a horrific crash on Cottage Grove that left two people dead Wednesday night.
CHICAGO, IL・4 DAYS AGO