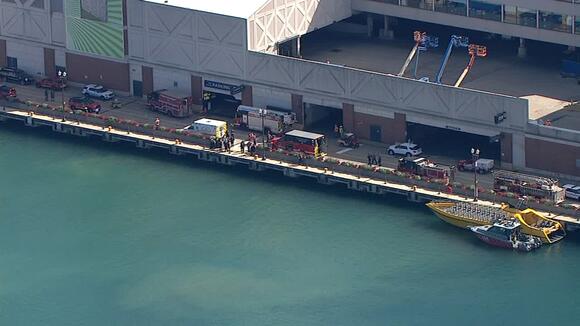 A 3-year-old boy who was allegedly pushed into Lake Michigan at Chicago's Navy Pier Monday has passed away, according to members of the family. Josiah Brown passed away Sunday at 10:16 a.m. after his aunt allegedly pushed the boy into the water Monday. Victoria Moreno, 34, was arrested Monday in the 700-block of East Grand Avenue, Chicago police said Wednesday morning. Moreno did not attempt to rescue the boy, CPD said. She appeared in bond court Wednesday afternoon, where a judge denied her bond. Her next court appearance is scheduled for Friday. According to prosecutors, the 3-year-old was also with Moreno during a previous incident a week earlier in which she allegedly stole the family's car and took her two nieces and nephew to Navy Pier, but the older niece called relatives to get them. Moreno has additionally been ordered to have no contact with her family. His family was around the child's bedside on Tuesday at Lurie Children's Hospital. They are asking for privacy, and his grandfather, Dan Brown, said they need "a lot of prayer right now." "Everybody's prayer helps," Brown said. "God makes things happen. That's what we are banking on right now." Police said the child went tumbling several feet into the lake, nearly drowning about 1 p.m. Monday afternoon near the north end of Navy Pier. He was walking with his aunt on the path next to the lake, before going into the water. Divers with the Chicago Fire Department pulled the child to dry land before rushing him to the hospital in full cardiac arrest. Brown described his grandson as "just a bundle of joy" who is "full of energy, wants to do everything" and "loves his dad." RELATED: Body found in Highland Park: Man's violent lakefront death brings focus to north suburban parties "I just want to give thanks to those who were there to respond," Brown said. "The situation is bad, but it could have been worse, so we have a praying chance that he makes it through, and that's all we are hoping for at this point." Investigators said the boy spent hours undergoing treatment as police remained at Navy Pier, working to determine what exactly happened. "As with incidents involving children, these are difficult circumstances, and, again, we ask that you keep the family in your thoughts," said CPD Deputy Chief Gabriella Shemash. At bond court Wednesday, prosecutors told the judge the boy is not expected to survive and charges could be upgraded. The relative initially told responding officers she was only a witness to the drowning, then claimed she was holding the boy's shirt and let him fall into the water, according to a source with knowledge of the investigation. Surveillance video shows the woman pushed him toward the edge of the pier and tossed him into the water, the source said. The boy wasn't expected to survive, the source said. A witness said they noticed the boy running around seemingly unsupervised just before the incident. Other witnesses on the scene described it as an odd situation, with the aunt just standing by while the child was in the water. The woman who called 911 explained the horror of the entire situation. "It's one thing to see him having been in there, and it just brings it to a whole new level to know it was intentional," Ashton King said. "I have a son who is about that boy's age. I relive the image every day. He just looked so panicked and scared, and to think that somebody he trusted put him in that position is horrendous." The woman said she wanted to jump in and help, but had to consider the factors of doing so while helping first responders get to the correct location. She and her friend threw a lifesaver into the water as another man was already down there trying to help. The Illinois Department of Children and Family Services said there is no prior contact regarding this child, and the department is investigating. Her charges could escalate now that the child has died. Sun-Times Media contributed to this report.

sad, but this is better for him. now he is in the care of God. not evil humans

there aren't enough adjectives, to describe that cruel woman who did this.

The holidays can serve as a tough reminder for those missing family members this year.
CHICAGO, IL・7 HOURS AGO
ABC 7 Chicago

Two people are dead and another is critically hurt after a shooting and crash on the city's West Side, Chicago police said.
CHICAGO, IL・1 DAY AGO
ABC 7 Chicago

The man was trying to holster his gun with it went off, accidentally shooting a 3-year-old boy in the leg, police say.
CHICAGO, IL・1 DAY AGO
ABC 7 Chicago

Court documents show there was a history of violent threats Andrei Kisliak made to his wife Vera Kisliak.
BUFFALO GROVE, IL・1 DAY AGO
ABC 7 Chicago

Police said an 18-year old man and a 24-year old woman were inside the restaurant when an unidentified gunman walked into the eatery and began firing, striking both victims.
CHICAGO, IL・12 HOURS AGO
ABC 7 Chicago

The young boy was taken to the hospital with a gunshot to his abdomen after family members indicated the boy was shot inside a Park Forest residence.
PARK FOREST, IL・1 DAY AGO
ABC 7 Chicago

The Will County Sheriff's Office said three people are in critical condition in an apparent violent attack in a home in unincorporated Crete Thursday evening.
WILL COUNTY, IL・1 DAY AGO
ABC 7 Chicago

Retired couple stabbed by son-in-law who may have been angry about divorce, authorities say

Authorities said the suspect may have been angry about his divorce from the victims' daughter. He was due to report to jail Friday for domestic battery.
CRETE, IL・1 DAY AGO
ABC 7 Chicago

A 15-year-old boy was shot and killed on the South Side Tuesday night, hours after another teen was wounded, Chicago police said.
CHICAGO, IL・3 DAYS AGO
ABC 7 Chicago

There's a push to get guns of all kinds off the street in Chicago and there's money, on the line.
CHICAGO, IL・23 HOURS AGO
ABC 7 Chicago

A Chicago woman said her daughter was robbed at gunpoint by a group of men who tried to take her vehicle.
CHICAGO, IL・1 DAY AGO
ABC 7 Chicago

Santa wasn't the only one looking to spread a little holiday cheer during the 17th annual "Shop with a Cop."
CHICAGO, IL・2 DAYS AGO
ABC 7 Chicago

Winter Lawndale-land celebration to spread holiday cheer across West Side

Winter Lawndale-land is a celebration to help change the narrative of the Lawndale community.
CHICAGO, IL・12 HOURS AGO
ABC 7 Chicago

A 16-year-old boy was shot while walking in the Roseland neighborhood Tuesday night, Chicago police said.
CHICAGO, IL・4 DAYS AGO