Why Invitae Corporation Sank as Much as 25.5% This Week

Shares of Invitae Corporation (NYSE: NVTA) sank as much as 25.5% this week, according to data from S&P Global Market Intelligence . Even though the company put out a potentially positive press release, the stock plummeted likely due to a fallout from a recent short squeeze, broad market movements, and a dislike for unprofitable companies in the current market environment.

This week, Invitae put out a press release highlighting the insights Praxis Precision Medicines was getting from Invitae's Citizen platform. The platform enables companies to get medical history data rapidly when running clinical trials, which will hopefully improve drug-making capabilities. Praxis will potentially become a longtime customer of Invitae because of this. When the news was released, Invitae's stock shot up for a brief period on Wednesday. But that jump did not last.

Even though there was some potentially positive news, Invitae's stock plummeted this week for multiple reasons. First, the stock has a high short interest estimated at 17.2%, which means a lot of short sellers are borrowing and selling outstanding shares. This high short interest likely drove a short squeeze on Invitae's stock back in August when shares shot up around 250%. As market participants rationalized, Invitae's share price has come back down to earth, driving the stock lower.

On top of this, the Federal Reserve raised interest rates again this week, up 75 basis points. Higher rates make it more difficult for companies to raise financing, which typically leads investors to favor more conservative and profitable companies. Invitae is neither, burning $700 million in free cash flow over the past 12 months. With less than $1 billion in cash on its balance sheet, Invitae looks like it will need to raise funds too. At higher interest rates, this will be more costly and is likely why shares of the stock continue to sink. 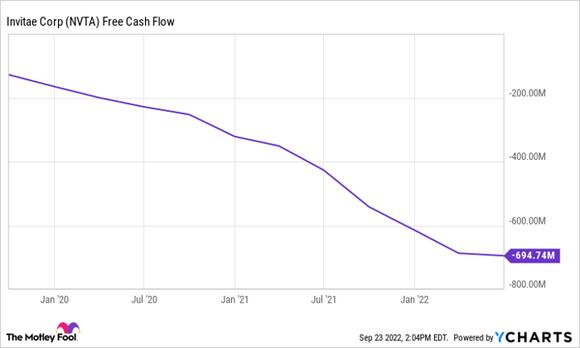 Shares of Invitae are down 93% over the past year. Yes, you read that right -- 93%. The stock now has a market cap of $568 million, which might make you think it is time to buy the dip and pick up some shares.

But before you do, be sure Invitae has a path to positive cash flow. Because right now the company is burning a ton of cash, which could lead to bankruptcy if the cash-burn problem isn't solved. Should bankruptcy result, you would lose 100% of your investment.

10 stocks we like better than Invitae
When our award-winning analyst team has a stock tip, it can pay to listen. After all, the newsletter they have run for over a decade, Motley Fool Stock Advisor , has tripled the market.*

They just revealed what they believe are the ten best stocks for investors to buy right now... and Invitae wasn't one of them! That's right -- they think these 10 stocks are even better buys.

2 Warren Buffett Stocks to Buy Hand Over Fist in December

Four years ago, shares of Aurora began trading on the NYSE.
1 DAY AGO
The Motley Fool

Adobe's future remains bright, which makes me a buyer of this tech stock.
2 DAYS AGO
The Motley Fool

Warren Buffett Bought This 1 Stock to Start 2022, Should You Buy It Before the Year's End?

This investment is a typical play from the Oracle's playbook.
18 HOURS AGO
The Motley Fool

Patience with these stocks could lead to a nice payoff.
16 HOURS AGO
The Motley Fool

How to Avoid What Dave Ramsey Calls the $483 Christmas Mistake

It could really pay to heed his advice.
15 HOURS AGO
The Motley Fool

Stimulus Update: Will You Get a Stimulus Check This Month to Help With Holiday Spending?

This is an expensive time of year, but a stimulus check could help you cover costs.
PENNSYLVANIA STATE・2 DAYS AGO
The Motley Fool

It's simpler than you might think to become a millionaire retiree.
19 HOURS AGO
The Motley Fool

Berkshire Hathaway owns a 9.9% stake in this leading luxury home-furnishings company.
15 HOURS AGO
The Motley Fool

Better Crypto to Own in 2023: Dogecoin or Shiba Inu?

A dogfight between two meme tokens and a surprise best in show.
1 DAY AGO
The Motley Fool

Should I Buy Costco Stock Before Earnings?

Costco will release its Q1 2023 earnings on Thursday, Dec. 8.
19 HOURS AGO
The Motley Fool

However, many people don't have a realistic idea of how much income benefits provide. Even with the increase, the average benefit is surprisingly low. You’re reading a free article with opinions that may differ from The Motley Fool’s Premium Investing Services. Become a Motley Fool member today to get instant access to our top analyst recommendations, in-depth research, investing resources, and more. Learn More.
20 HOURS AGO
The Motley Fool

Should You Buy the 3 Highest-Yielding Dividend Stocks in the Dow Jones?

These three stocks all boast high yields, but one looks like the best option for dividend investors.
17 HOURS AGO
The Motley Fool

There comes a point when it's okay to stop adding money to your savings.
17 HOURS AGO
The Motley Fool

65% of American Investors Say a Drop in Inflation Would Make Them More Financially Confident. But When Will That Happen?

If you're tired of rampant inflation, you're certainly not alone.
12 HOURS AGO
The Motley Fool

2 Ultra-High-Yield Dividend Stocks With Up to 46% Upside in 2023, According to Wall Street

Analysts expect these supercharged income stocks, with yields of 7.7% and 9.3%, to handily outperform in 2023.
1 DAY AGO
The Motley Fool

Investors can't go wrong with these companies at their current prices and dividend yields.
13 HOURS AGO
The Motley Fool

3 Top Growth Stocks That Are Screaming Buys in December

Thanks to undeniable growth catalysts and deeply discounted stock prices, these beaten-down stocks could soar in 2023.
16 HOURS AGO
The Motley Fool

The stock market has been shaky all year, worrying many investors. However, history gives us plenty of reasons to be optimistic. Warren Buffett's strategy can help maximize your earnings. You’re reading a free article with opinions that may differ from The Motley Fool’s Premium Investing Services. Become a Motley Fool...
17 HOURS AGO