ProPublica is an independent, nonprofit newsroom that produces investigative journalism with moral force. 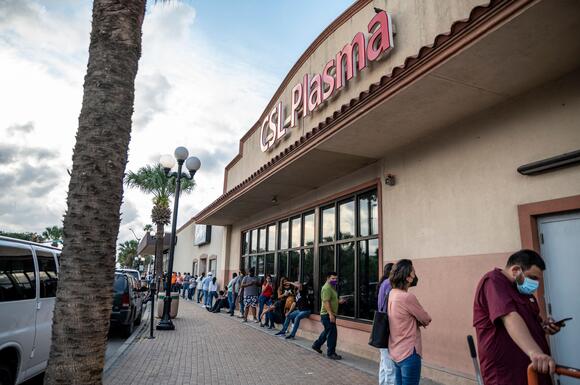 ProPublica is a nonprofit newsroom that investigates abuses of power. Sign up to receive our biggest stories as soon as they’re published.

This story was co-published with ARD German TV.

A federal district judge in Washington, D.C., has ordered immigration officials to allow Mexican citizens with visas to sell their blood plasma in the U.S.

U.S. District Judge Tanya Chutkan granted a preliminary injunction overturning a policy announced last year by U.S. Customs and Border Protection officials that barred Mexican visitors from participating in what had become a multibillion-dollar business along the border.

Judge Chutkan ruled that CBP officials had “failed to consider” the extent to which blood plasma companies were relying on Mexican donors and that they had failed to adequately justify the policy.

In issuing the preliminary injunction, the judge found that the companies had shown they had a “likelihood of success” to overturn the ban if the case went to trial. She noted that the costs of opening collection centers in other regions to make up the shortfall — $2.5 million to $4 million per center — would be “substantial.’’

A spokesperson for CBP declined to say whether the agency planned to appeal the ruling, saying “this matter is still under litigation.”

U.S. officials had long acknowledged that the role of Mexican citizens in the blood plasma business along the border was a “gray area”in immigration law, with some Border Patrol agents refusing to let people enter the U.S. for donations while others allowed it.

Many people living on the Mexican side of the border hold visas that allow them to come to the United States to shop or visit relatives. After the CBP imposed its ban, they risked losing those visas if they were caught selling blood plasma.

ProPublica, ARD German TV and Searchlight New Mexico reported in 2019 that thousands of Mexicans were crossing the border to donate blood as often as twice a week, lured by bonus payments and hefty cash rewards, an economic lifeline for many of them. Mexican law bars people from selling plasma.

In Facebook posts, the Spain-based pharmaceutical company Grifols, which had teamed up with its Australia-based rival CSL Plasma to sue CBP over the ban, is already inviting Mexican donors back to the U.S. plasma centers . Some plasma donors are still warning others to be careful at the border to avoid having their visas confiscated. “As if you would tell them on the bridge where you go,” a comment in Spanish says.

Some donors interviewed by ProPublica said they would welcome the legal clarity provided by the court decision. “Finally, we can cross without fear,” said Gamaliel, a resident of Ciudad Juárez who previously told his story of being a donor . “It was always so risky.” Nevertheless, he said, he would still only go back to donate in case of a financial emergency, because of the health risks associated with frequent plasma donations. As ProPublica and ARD found, frequent plasma donation was harming the health of some Mexican citizens who relied on the system for money. Some frequent donors were underweight and showed low levels of antibodies.

In her ruling, Chutkan, who was named by then-President Barack Obama to the bench, wrote that she had considered health risks for the donors, quoting studies analyzing potential negative long-term effects of plasma donations.

She rejected the companies’ argument that Mexican blood donors were no different from couriers ferrying laboratory samples across the border, since both were “carrying a substance that ‘originates in Mexico.’”

“The comparison is unpersuasive,” Chutkan responded in her ruling. “A person is more than just a shopping cart of biological products to be bought and sold at a later date.” She said that her decision to grant a preliminary injunction reflected the crucial need for blood plasma in manufacturing lifesaving medications.

“The decision recognizes the critical importance of the need for plasma in the manufacture of life-saving therapies for hundreds of thousands of people. We are excited to welcome back Mexican donors,” a spokesperson with CSL Behring, CSL’s U.S. subsidiary, said in a statement provided to ProPublica. A Grifols spokesperson said: “The decision is good news for the patients in the U.S. and worldwide who depend on the lifesaving medicines made from plasma.”

The pharmaceutical companies are now scrambling to reorganize their centers along the border after the ban on Mexican donors had prompted layoffs of employees in a reduction in operating hours. Grifols announced it would provide buses beginning today to transport donors from the U.S.-Mexican border to its plasma centers. The Mexican newspaper Diario Frontera posted a picture of people sitting in line in the dark in front of a plasma center in Brownsville, Texas.

People identified by Diario Frontera as Mexican donors line up in front of a plasma center in Brownsville, Texas, on Monday. (Facebook)

In the suit challenging the ban, the companies had acknowledged for the first time the extent to which Mexicans contribute to the world’s supply of blood plasma: Up to 10% of the blood plasma collected in the U.S. — millions of liters a year — came from Mexicans who crossed the border with visas that allow brief visits for business and tourism. The U.S. accounts for approximately 60% of plasma collected worldwide. It is the only country that allows people to donate plasma as many as 104 times a year.

Do You Have a Tip for ProPublica? Help Us Do Journalism.

Sept. 27, 2022: This story originally incorrectly stated that the U.S. is the only country where donors are allowed to give plasma twice a week. At least one clinic in Canada also allows donations at that frequency.

trying their best to destroy com.on man! u know there won't b enough oversize to b sure it's safe. I mean comon

They have had zero vaccinations and now they are giving blood? Must have been a democratic judge!

On Tuesday, President Joe Biden displayed another instance of questionable behavior. A reporter asked him a question about the end of the U.S. state of emergency, which is set for May 11th.
1 DAY AGO
Newsweek

The video sparked discussions on social media about what kind of weapon could be responsible for the attack.
1 DAY AGO
Insider

"The girls from Ukraine and Switzerland simply ran from me like fire," Anna Linnikova told Evening Moscow.
LOUISIANA STATE・1 DAY AGO
RadarOnline

President Joe Biden awkwardly grabbed a reporter’s hand this week and squeezed under her umbrella after being asked about his recent decision to end two Covid-19 national emergencies, RadarOnline.com has learned.The somewhat bizarre incident took place on Tuesday afternoon as the 80-year-old president was departing the White House to visit New York City.While leaving the White House and approaching his helicopter, NBC News Chief White House Correspondent Kristen Welker questioned Biden about his Monday night decision to draw down two Covid-19 national emergencies by May 11.“What's behind your decision to end the Covid emergency?” she asked.But before answering Welker’s question,...
WASHINGTON STATE・21 HOURS AGO
Narcity USA

The Lone Star State is home to some pretty gnarly creatures like giant killer wasps and venomous "sea dragons," to name a few. However, most of them aren't quite as deadly as one tiny insect that calls Texas home, and it’s just waiting to give you a kiss. Kissing...
TEXAS STATE・1 DAY AGO
AOL Corp

The United States is tracking warlike announcements by Iran’s regime that it deployed two military ships to Brazil that are also headed for the Panama Canal, where Tehran declared it will establish a military presence. A U.S. State Department spokesperson told Fox News Digital on Tuesday, "We are aware...
FLORIDA STATE・1 DAY AGO
Newsweek

"There is no other way to talk to these fools," State Duma member and former military commander Andrey Gurulyov said.
2 DAYS AGO
ProPublica

Is It Forensics or Is It Junk Science?

Dubious forensic techniques have spread throughout the criminal justice system for decades. Here’s what ProPublica has learned about how junk forensic science techniques and how they proliferate.
OREGON STATE・2 DAYS AGO

ProPublica is an independent, nonprofit newsroom that produces investigative journalism with moral force.