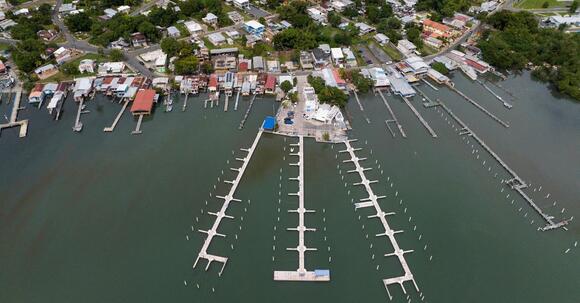 San Juan, Puerto Rico, Sept 17 (Reuters) - Tropical storm Fiona gained strength on Saturday as it headed toward Puerto Rico, prompting the National Hurricane Center (NHC) to issue a hurricane warning and alerts for "life threatening floods and mudslides" for the U.S. territory and watches for the U.S. Virgin Islands.

One man was found dead in the French Caribbean island of Guadeloupe, after heavy rains from the massive storm swept away his house in the Basse-Terre district, according to local authorities. read more

The storm was about 75 miles (120 km) southeast of St Croix and about 150 miles (240 km) southeast of Puerto Rico with maximum sustained winds of 60 mph (95 kph) as of Saturday night, according to NHC. It was expected to become a hurricane on Sunday and into Sunday night, as it moves near Puerto Rico. A storm is considered a Category 1 hurricane when sustained windspeeds reach 74 mph or greater.

The island was braced for up to 20 inches (50 cm) of rain and high winds that could bring flooding, mudslides and power outages.

"Hurricane conditions are expected across portions of Puerto Rico Sunday and Sunday night, and are possible across the U.S. Virgin Islands (Saturday night) and Sunday," NHC said.

Heavy rains from Fiona were also due to spread to the Dominican Republican on Sunday and to the Turks and Caicos Islands on Monday night.

The government of the Dominican Republic issued a hurricane warning for the east of the country, from Cabo Caucedo to Cabo Frances Viejo, NHC said.

On Saturday, residents in Puerto Rico were bracing for severe power outages as the island's grid remained fragile after Hurricane Maria in September 2017 caused the largest blackout in U.S. history. In that category 5 storm, 1.5 million customers lost electricity with 80% of power lines knocked out.

Authorities have opened about 80 shelters and closed beaches and casinos, and residents were urged to seek shelter.

Governor Pedro Pierluisi signed a state of emergency on Saturday warning residents, "We should not underestimate this storm in the least. The government is active and prepared to respond to the emergency."

He added, "We expect that during the night, the winds and rain will intensify," and "we all want the (electric) service to improve, but now what is important is the response, that we are prepared."

Abner Gomez, a spokesman for LUMA Energy, operator of the island's power grid, said the storm will cause outages, "But we will be ready to respond."

"The same thing that happened during Maria is not going to happen here," Gomez said.

Omg people seriously need therapy when they can’t even read an article about the weather in Puerto Rico without suffering from Trump Derangement Syndrome. Get some help. STAT!!!

Forget the politics. I just hope they are heeding the warnings to keep the death toll down, these storms are no joke. I know I lost everything in Super storm Sandy,

Hurricanes are normal on the island, but have gotten progressively worse throughout the years. May GOD protect the island and its people. They have been thru enough already with hurricane Maria. 🙏🙏🙏

New York City migrants are tearing up their U.S. immigration documents as they escape to Canada

Some New York City migrants are abandoning New York to escape to Canada where they believe they may have a better chance. The New York Post reports that migrants who are fed up with crimes, drugs, and living in New York shelters are abandoning the city and heading towards Canada.
NEW YORK CITY, NY・12 HOURS AGO
Reuters

BEIJING/WASHINGTON (Reuters) -Beijing on Monday urged Washington to show restraint as the U.S. military searched for remnants of what it believes was a Chinese surveillance balloon it shot down over the Atlantic but which China says was a civilian craft that accidentally drifted astray.
WASHINGTON STATE・10 HOURS AGO
Reuters

PORT-AU-PRINCE, Feb 3 (Reuters) - Haitians desperate for passports to apply for a U.S. migration program crowded local migration centers, according to videos shared on social media on Friday, crushing through small doorways and scaling the outside of stairways.
3 DAYS AGO
Reuters

EXPLAINER - Why was the Turkey-Syria earthquake so bad?

LONDON, Feb 6 (Reuters) - The magnitude 7.8 earthquake that struck Turkey and Syria on Monday is likely to be one of the deadliest this decade, seismologists said, with a more than 100 km (62 miles) rupture between the Anatolian and Arabian plates.
CALIFORNIA STATE・11 HOURS AGO
Reuters

Feb 5 (Reuters) - The Canadian government said on Sunday it deployed a military aircraft over Haiti to address what it called a "dire security situation" and to support efforts to disrupt the activities of Haitian gangs.
1 DAY AGO
Reuters

SAN JOSE, Feb 6 (Reuters) - China apologized to Costa Rica for a balloon that flew over its territory, the Central American country's government said on Monday, after a separate suspected Chinese spy balloon traveling over the United States sparked a major political and diplomatic spat.
2 HOURS AGO
Reuters

Death toll from mysterious meningitis outbreak in Mexico at 35

MEXICO CITY, Feb 6 (Reuters) - State officials in northern Mexico on Monday reported another death caused by a mysterious meningitis outbreak, bringing the total number of victims linked to the disease to 35.
4 HOURS AGO
Reuters

MEXICO CITY, Feb 6 (Reuters) - The Mexican government said on Monday it had informed the United States that it rejects a possible U.S. re-implementation of an immigration policy known as "Remain in Mexico," which required asylum seekers to wait for hearings in Mexico.
MISSOURI STATE・58 MINUTES AGO
Reuters

MEXICO CITY (Reuters) - The number of Ecuadorians braving the trek north to Mexico in hopes of reaching the United States jumped exponentially last year amid a wave of violence and shrinking job opportunities at home, experts say.
2 HOURS AGO
Reuters

PORT-AU-PRINCE (Reuters) - Haitian Prime Minister Ariel Henry on Monday formally installed a transition council whose job will be to prepare for long-overdue elections in the Caribbean country, amid a humanitarian crisis driven by violence from armed gangs.
2 HOURS AGO
Reuters

U.S. blocks vessels from area near balloon shoot down

WASHINGTON, Feb 6 (Reuters) - The U.S. Coast Guard said Monday it is imposing a temporary security zone in the waters off Surfside Beach, South Carolina in the area where the U.S. military on Saturday shot down a suspected Chinese spy balloon.
SURFSIDE BEACH, SC・5 HOURS AGO
Reuters

Feb 5 (Reuters) - The United States is working to recover a suspected Chinese spy balloon that was shot down off the coast of South Carolina, according to a statement released by the Pentagon on Sunday.
SOUTH CAROLINA STATE・1 DAY AGO
Reuters

WASHINGTON/BEIJING, Feb 6 (Reuters) - The U.S. Coast Guard on Monday imposed a temporary security zone in waters off South Carolina during the military's search and recovery of debris from a suspected Chinese spy balloon that a U.S. fighter jet shot down.
WASHINGTON STATE・3 HOURS AGO
Reuters

MANILA, Feb 6 (Reuters) - The Philippine Coast Guard has stepped up its presence in the disputed South China Sea by deploying additional vessels and conducting more sorties and overflights to protect maritime territory and the country's fishermen, its chief said on Monday.
WASHINGTON STATE・17 HOURS AGO