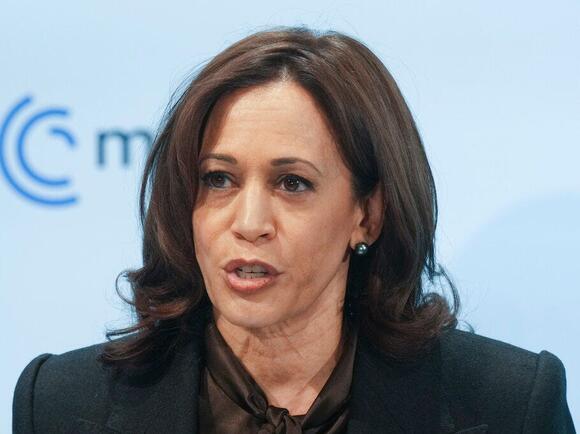 Vice President Kamala Harris said she wishes lawmakers would take on domestic threats to national security without a "partisan lens."

During an NBC News's Meet the Press interview, Harris recalled her time on the Senate Intelligence Committee and said she wishes lawmakers would address domestic threats as "Americans first."

"When we walk through the doors, Republicans, Democrats, Independents — when we walked through the door of the SCIF (Sensitive Compartmented Information Facility), that secure room — press could not come in, no cameras, no public, just us. People would take off their jackets, they'd roll up their sleeves and they were Americans first — focused on the threats to our national security — on common ground, with a common purpose which is to defend our nation against attacks," Harris said.

She added: "When I think about what we have been seeing in terms of the attacks from within, I wish we would approach it the same way — as Americans instead of through some partisan lens."

When asked in the NBC interview, which aired on Sunday on the 21st anniversary of the September 11 terrorist attacks, if threats from within the US were as dangerous as foreign threats, Harris said:  "It is very dangerous and I think very harmful. And it makes us weaker."

Her remarks come more than a week after President Joe Biden warned of the dangers of extremism from MAGA Trump supporters during a primetime address.

"Democracy cannot survive when one side believes there are only two outcomes to an election: either they win or they were cheated. And that's where MAGA Republicans are today," Biden said.

On Sunday, Harris defended Biden's remarks, saying throughout his career, Biden worked "across the aisle."

"But there are moments in time when we have to also agree, all good people who care about our country, that there are those who right now are vividly not defending our democracy," Harris added. "And I think we want that our Commander-in-Chief, that the president of the United States will speak up and raise the alarm about what this means to our strength and our future, much less our integrity."

You and the administration will condemn MAGA Republicans as terrorist but are so reluctant to call out a real domestic terrorist threat in that of ANTIFA. Even to the point you will deny their very existence. Don’t sit there and throw stones when you won’t take a long look at yourself and see the division you continue to create in this country.

Kamala that’s interesting, how many terrorists did you and Joe bring over here from Afghanistan when you existed there. Hundreds I’ll bet

Well, isn't she precious... Mrs Boarder Zar is concerned about threats... I am sure there was a time when she closed her windows and locked her doors for safety and security when at home or away.Maybe one day she might realize closing Boarder is much the same...Our VP (very pathetic) has no clue

"He always tries to claim he does not associate with white nationalists, that he does not know them," Alaina Beverly told MSNBC.
FLORIDA STATE・1 DAY AGO
Business Insider

"This is simply inexcusable that he would have dinner with this noted white nationalist, antisemite Nick Fuentes," former Rep. Dent said of Trump.
PENNSYLVANIA STATE・1 DAY AGO
Business Insider

"When will you invade the other Presidents' homes in search of documents, which are voluminous, which they took with them, but not nearly so openly and transparently as I did?" Trump wrote.
13 HOURS AGO
Business Insider

The former president bought his luxury Boeing 757 private jet in 2011 and decked it out with gold-plated seatbelts and the Trump family crest.
PENNSYLVANIA STATE・1 DAY AGO
Business Insider

Rep. Adam Schiff has criticized the House Minority Leader before for pledging to remove multiple Democratic members of the House from their committee positions.
WASHINGTON STATE・1 DAY AGO
Business Insider

Meet a Republican who would have all $10,000 of his student loans canceled under Biden's plan but thinks it's an unfair policy

Matthew, 28, would get all of his loans forgiven under the program, but he predicts the Supreme Court will overturn it.
MASSACHUSETTS STATE・1 DAY AGO
Business Insider

Trump said Kanye West is a 'seriously troubled man, who happens to be Black,' and defends controversial Mar-a-Lago dinner

Trump's real-estate company rested its defense case in a Manhattan tax fraud trial, after getting scolded by the judge for an 11th-hour evidence dump.
NEW YORK CITY, NY・11 HOURS AGO
Business Insider

Tshibaka was endorsed by Donald Trump, while Murkowski had the endorsements of several high-profile Democrats, including Sen. Joe Manchin.
ALASKA STATE・19 HOURS AGO
Business Insider

Gov. Kristi Noem suggests RNC Chair Ronna McDaniel should be replaced after midterm losses: 'I don't know a party that can continue to lose like we have and keep their jobs'

A GOP congressman says TikTok should be banned in the US and is introducing legislation to do so, calling the app 'digital fentanyl'

Some European officials are accusing the US of profiting from the Ukraine war, report says

The US is benefitting from high natural gas prices and by selling weapons say some top European Union officials, according to a report by Politico.
WASHINGTON STATE・1 DAY AGO
Business Insider

Nick Fuentes is well known as a white supremacist and anti-semite. That hasn't stopped Trump and at least 5 GOP lawmakers from associating with him since 2017.

These controversial encounters have rattled the GOP with Kevin McCarthy and Mitt Romney urging other lawmakers to avoid Fuentes.
GEORGIA STATE・13 HOURS AGO
Business Insider

Trump said the dinner was intended to host Kanye West at Mar-a-Lago, but the rapper arrived with guests whom Trump said he "knew nothing about."
10 HOURS AGO