By Arpan Rai
The Independent
28 days ago 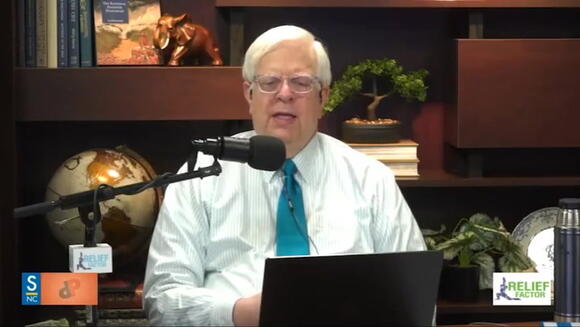 Conservative radio host Dennis Prager has sparked outrage by saying that there were “undoubtedly many nice slaveholders” who treated people “beautifully”.

The founder of media company PragerU, speaking on the Dennis and Julie podcast, began by talking about how “many nice people help destroy societies” and how “nice people can support vicious things”.

“We think that people who do bad things either think they are doing bad and so they are truly evil or they will be obviously bad at interpersonal relations but it doesn’t work that way,” the far-right radio host said.

“There were undoubtedly many nice slaveholders in the south. This is not meant facetiously, again, it’s meant literally. If you had been invited to one of their homes, you would’ve been treated beautifully. But they supported a vicious system,” he added.

A video of the Mr Prager’s remarks was shared on Wednesday in which he also equated “the Left” with “slavery” by saying it was involved in the “diminution of human rights and liberties, which is a form of enslavement”, without elaborating further.

He said that though the Left was “not slavery ”, it was still a “vicious system” whose end result was the enslavement of the population.

Mr Prager’s comments have garnered flak on social media as many condemned his terming slaveholders as “nice”.

“Nice enough to pay after the fact? Nice enough to not treat people like actual property? It seems Prager seems to forget what the definition of slave actually is in his rush to be intellectually dishonest,” said one Twitter user.

Some pointed out the lack of knowledge on critical race theory in the far-right radio host’s remarks.

He was previously condemned for claiming unvaccinated Americans are “the most hated” group of people “since slavery ”, in an attack on Covid vaccinations in November last year.

Speaking to an audience, he claimed to have received “4,000 f*** you” messages for comparing Covid with AIDS .

Mr Prager alleged this was because he “had the hotspur to say that the unvaccinated are pariahs the way that the gays were during the AIDS crisis”, in remarks delivered to a live audience.

“How did people get governed by irrational fears?” he told Newsmax . “Whether it is of the non-vaccinated, who are the pariahs of America, as I have not seen in my lifetime, any pariah group like this.”

The conservative radio personality was widely condemned by Twitter users for being both factually inaccurate offensive.

slavery was and is wrong, it still goes on, but how individual owners treated them was different. many stories of owners who did right by them. the political correctness police need to just shut up.

Why the outrage when it was probably true? I swear people just don’t want to hear the truth nowadays!

Take the statement out of context, jump to conclusions, exhibit fake outrage and refuse to apologize or correct the record for the outright lies and half-truths that they spread. Left wing journalism at it again.

'I'm exhausted with these white folx': Black female diversity officer at Dept of Defense boasted on Twitter about reprimanding a white woman for her 'CAUdacity' after she said 'black people can be racist too'

A senior official in the Pentagon's education wing who has written books on anti-racism has a history of mocking white people on Twitter, recently-resurfaced posts revealed on Tuesday. Kelisa Wing is the chief diversity, equity and inclusion officer in the Department of Defense's Education Activity office, which oversees schooling for...
SOCIETY・23 DAYS AGO
HuffPost

MSNBC guest claims 'White people turn violent when they don't politically get their way:' 'It's what they do'

MSNBC guest Elie Mystal slammed White people as being violent racists during an appearance on "The Cross Connection with Tiffany Cross" Saturday. His remarks were made during a discussion about the Department of Justice's (DOJ) investigation into former President Donald Trump. "The cause of the problem is, of course, is...
POTUS・17 DAYS AGO

There have been many discussions lately about bringing mandatory prayer to public schools. As a parent, I think this is a terrible idea. I believe that our media and our politicians too often assume that there is general public support for prayer in school. This is a misconception.
8 DAYS AGO
The Morning Hustle

LAURA INGRAHAM: Dems have been working overtime to sell a lie to the American people

Laura Ingraham discusses how the Biden administration is actually "dark and sinister" and how they're trying to sell a lie to Americans on "The Ingraham Angle."
POLITICS・8 DAYS AGO
Newsweek

'What're You Doing in a White Place': Bar Faces Backlash for 'Racist' Video

"I'm so so sorry you had to experience this type of ignorant, racist behavior," a comment read.
BEHIND VIRAL VIDEOS・15 DAYS AGO

Hillary and Chelsea Clinton on How Their Family Fueled Right-Wing Media: ‘We Were the Reason That Fox News Was Created’

Hillary and Chelsea Clinton are two of the creative leaders honored for Variety‘s 2022 Power of Women. For more, click here. Hillary and Chelsea Clinton were blunt when speaking to Variety about the Clinton family’s impact on right-wing media. “We were the reason that Fox News was created. Because Rupert Murdoch recognized a great market opportunity,” Chelsea said during her Variety Power of Women interview. Both Clintons also spoke to the danger of the network when it comes to societal issues like climate change and COVID. “Climate change illuminated where Fox News was willing to go and its destructive impact,” Chelsea said. “It’s not...
FAMILY RELATIONSHIPS・9 DAYS AGO
Decider.com

Ana Navarro Defends Republican Status After Sunny Hostin Grills Her on ‘The View’: “Do You Piss From Inside the Tent or From Outside?”

Sunny Hostin had a lot of questions for Ana Navarro and Alyssa Farah Griffin on this morning’s episode of The View. During a conversation about whether the country could benefit from a third political party, Hostin took to asking her Republican co-hosts if they find themselves “complicit” for remaining in the party, despite them both being outspoken against Former President Donald Trump.
POLITICS・10 DAYS AGO
Fox News

Gutfeld riffs on media's panic as Musk-Twitter deal seems certain: 'They know the jig is up'

Tesla chief Elon Musk may continue through with his planned purchase of Twitter, after months of speculation and other developments, as "The Five" reacts.
BUSINESS・1 DAY AGO