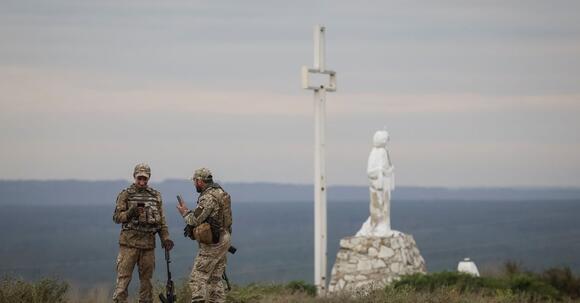 Sept 21 (Reuters) - President Vladimir Putin on Wednesday ordered Russia's first mobilisation since World War Two and backed a plan to annex swathes of Ukraine, warning the West he was not bluffing when he said he would be ready to use nuclear weapons to defend Russia. read more

* "If the territorial integrity of our country is threatened, we will without doubt use all available means to protect Russia and our people - this is not a bluff," Putin said in a televised address to the nation. read more

* Russia's mobilisation was a predictable step that will prove extremely unpopular and underscores that the war is not going according to Moscow's plan, Ukrainian presidential adviser Mykhailo Podolyak said. read more * Pro-Russian figures on Tuesday announced referendums for Sept. 23-27 in Luhansk, Donetsk, Kherson and Zaporizhzhia provinces, representing around 15% of Ukrainian territory, or an area about the size of Hungary. read more

* In Moscow's first update on casualty numbers in almost six months, Shoigu also said 5,937 Russian soldiers had been killed since the start of the conflict. Shoigu dismissed assertions by Kyiv and the West that Russia has suffered heavy losses, and said 90% of wounded Russian soldiers had returned to the frontline. read more * U.S. President Joe Biden will try to rally the world against Russia's invasion of Ukraine in a speech to the United Nations General Assembly on Wednesday, saying Moscow's war against its neighbor violates the tenets of the U.N. charter. read more

* Germany nationalised gas importer Uniper (UN01.DE) on Wednesday and Britain capped the wholesale cost of electricity and gas for businesses, in Europe's latest moves to keep the lights on and heaters running this winter as the war in Ukraine escalates. read more

* Stocks fell, while safe havens such as government bonds and the dollar rose, as already anxious investors fled risk assets after Putin ordered a partial mobilisation and accused the West of "nuclear blackmail".

* "Those who try to blackmail us with nuclear weapons should know that the weathervane can turn and point towards them," Putin said in the televised address. read more

* "Sham referenda and mobilization are signs of weakness, of Russian failure," Bridget Brink, the U.S. ambassador to Ukraine said on Twitter.

(This story corrects fifth item in DIPLOMACY/POLITICS to show Shoigu said 5,937 Russian soldiers had been killed, not 5,397)

Russia tries to black mail the entire world with nukes if they don't win their war in Ukraine. Then they turned around and said everybody else was to blame. First off Russia and its allies are the only one who have been on International TV discussing using nuclear weapons against the west and even showed simulations to the Russian people on TV of using a nuke to destroy England with a wave of nuclear radiation from an underwater nuke. No other country has done this,only Russia. Shows you what kind of narcissist putin truly is

I just saw a listing on eBay for some Russians guns. The ad said they are in “new condition, never fired, and only dropped once.”

Vladimir Putin’s alleged battle with cancer has been called back into question after the Russian leader fell down a set of stairs and “soiled himself” earlier this week, RadarOnline.com has learned.The surprising incident reportedly took place on Wednesday night at the 70-year-old leader’s residence in Moscow.According to General SVR, an anti-Putin Telegram channel allegedly run by a former Kremlin spy, Putin fell five steps before landing on his tailbone.Even more surprising is the channel’s claim that Putin “involuntarily defecated” himself as a result of the “cancer affecting his stomach and bowels.”“Three bodyguards helped the president get to the nearest couch...
14 HOURS AGO
Newsweek

Russian Foreign Minister Sergei Lavrov made a surprise admission at his annual news conference in Moscow on Thursday.
1 DAY AGO
TheDailyBeast

In a sign of the times for Vladimir Putin’s twisted Russian regime, a regional governor has been backed by the State Duma after saying the “descendants of African-American slaves” are to blame for the country’s growing crisis. Vadim Shumkov, governor of the Kurgan region, said Russian...
1 DAY AGO
Reuters

Nov 30 (Reuters) - Russia said on Wednesday it had promoted the chief engineer of Ukraine's Zaporizhzhia nuclear plant to become its director, after Kyiv said the plant's previous boss was abducted by Russian authorities.
2 DAYS AGO
Reuters

KYIV, Nov 30 (Reuters) - Ukrainian President Volodymyr Zelenskiy said Russian forces were trying to advance in the northeast and east and "planning something" in the south, while NATO sought on Wednesday to reassure other countries that fear destabilisation from Moscow.
GEORGIA STATE・3 DAYS AGO
Reuters

Nov 30 (Reuters) - Russia will pay special attention to building infrastructure for its nuclear forces in 2023, Defence Minister Sergei Shoigu said on Wednesday. Shoigu said in televised comments that the Russia would also work to improve the combat capabilities of its missile forces and that facilities were being built to accommodate new missile systems. Russia has the largest stockpile of nuclear weapons in the world, with close to 6,000 warheads.
3 DAYS AGO
Reuters

Nov 30 (Reuters) - Russian Foreign Minister Sergei Lavrov said on Wednesday it was vital to avoid any kind of military confrontation between nuclear powers, even if it only involved conventional weapons, the TASS news agency reported.
2 DAYS AGO
Reuters

BRUSSELS, Nov 30 (Reuters) - The European Commission proposed a plan on Wednesday to compensate Ukraine for damage from Russia's invasion with proceeds from investing Russian funds frozen under sanctions.
3 DAYS AGO
Reuters

Dec 1 (Reuters) - Russian forces tried to advance in eastern Ukraine and trained tank, mortar and artillery fire on Kherson in the south, the Ukrainian military said, as Western allies sought to buttress Ukraine and its neighbours against Moscow.
GEORGIA STATE・2 DAYS AGO
Reuters

BUCHAREST, Nov 30 (Reuters) - Ukraine needs the U.S. made Patriot missile defence systems to protect its civilian infrastructure, under heavy attack by Russia, Foreign Minister Dmytro Kuleba said on Wednesday, adding he would try to convince Germany to allow their delivery.
2 DAYS AGO
Reuters

NEW YORK, Nov 30 (Reuters) - U.S. Treasury Secretary Janet Yellen on Wednesday said social media company Twitter should be held to certain standards for content, arguing that it is "not that different" from radio stations and broadcasters subject to such rules.
2 DAYS AGO
Reuters

BUCHAREST, Nov 30 (Reuters) - Russia must withdraw its heavy weapons and military personnel from the Zaporizhzhia nuclear power plant if the U.N. atomic watchdog's efforts to create a protection zone are to succeed, Ukrainian Foreign Minister Dmytro Kuleba said on Wednesday.
2 DAYS AGO
Reuters

NEW YORK, Nov 30 (Reuters) - Prosecutors on Wednesday moved to confiscate $5.4 million from a U.S. bank account belonging to Russian businessman Konstantin Malofeyev, who Washington has accused of financing separatists in eastern Ukraine and Crimea and imposed sanctions on him.
TEXAS STATE・2 DAYS AGO
Reuters

WASHINGTON, Nov 30 (Reuters) - The United States is "deeply concerned" about American detainee Paul Whelan in Russia and has not been able to get information on his whereabouts or condition from Moscow, White House national security spokesman John Kirby said on Wednesday.
WASHINGTON STATE・2 DAYS AGO
Reuters

Yellen says she 'certainly' plans to remain as Treasury secretary

NEW YORK, Nov 30 (Reuters) - U.S. Treasury Secretary Janet Yellen on Wednesday said she "certainly" planned to remain on in her job. Yellen told an event hosted by the New York Times Dealbook she had no plans to leave Treasury.
2 DAYS AGO
Reuters

OTTAWA, Nov 30 (Reuters) - The Russian invasion of Ukraine shows that authoritarian regimes are not reliable trade partners and future supply chains should run through countries like Canada that are concerned about carbon emissions and human rights, Canadian Prime Minister Justin Trudeau said on Wednesday.
2 DAYS AGO
Reuters

BUCHAREST, Nov 30 (Reuters) - NATO foreign ministers sought on Wednesday to reassure fragile countries in Russia's neighbourhood that they fear could be destabilised by Russia as the conflict in Ukraine drags on, squeezing energy supplies and pushing up prices.
GEORGIA STATE・3 DAYS AGO
Reuters

Factbox-What are Russia and Ukraine's positions on talks to end the war?

Nov 30 (Reuters) - Russia invaded Ukraine on Feb. 24 in what President Vladimir Putin described as a "special military operation". The war is now in its 10th month. Here is a summary of what both sides have said about their conditions for a possible end to the conflict.
2 DAYS AGO
Reuters

BUCHAREST, Nov 30 (Reuters) - NATO allies are concerned about China's rapid and opaque military buildup and its cooperation with Russia, and discussed concrete ways to address the challenges posed by Beijing on Wednesday, said U.S. Secretary of State Antony Blinken.
2 DAYS AGO