The most worn fashion designers at Venice Film Festival 2022 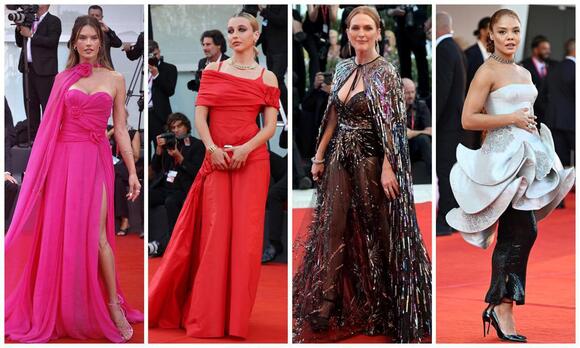 Giorgio Armani is the most popular designer of this year’s Venice Film Festival so far, a new study reveals. The study, conducted by luxury watch experts Chrono 24 , analyzed as many looks from more than 200 celebrities from the last six days of the Festival in Venice to discover which designers have been chosen the most for red carpets, press calls, and arrivals.

Giorgio Armani has been the top choice so far among celebrities from all over the world, with a whopping 45 celebrities wearing the designer during the first six days of the festival.

Among the stars who chose the Italian designer is Tessa Thompson , who wore a statement piece by Armani Privé from the autumn/winter 2009 couture show. The outfit comprised a strapless silver dress with a cascading peplum waist and embellishments on each side.

“Euphoria” on-screen sisters Sydney Sweeney and Maude Apatow also chose Armani, matching in black gowns. Sweeney wore a dress with a navy satin neckline and a large bow, while Apatow opted for a strapless gown that billowed at the bottom.

Valentino, the fashion house founded by Italian magnate Valentino Garavani , comes in second with 17 looks throughout the festival. During recent shows, Valentino highlighted the recurring theme of “Valentino pink,” a counterpart of the infamous “Valentino red”; however, the Festival has also shown a different side of the designer.

During the inaugural day, Julianne Moore wore a sheer, heavily sequined ensemble, including a black bodysuit and sweeping cape, with sparkling embellishments to the red carpet of “White Noise,” while Emma Chamberlain chose a red vintage dress from Valentino’s 2007 archives.

The fourth day saw Sigourney Weaver shine in a “Valentino red” pantsuit on the red carpet of “Master Garden.” At the same time, Italian singer Elodie debuted on the Festival’s red carpet on the fifth day, wearing a black bodycon dress.

Third is yet another Italian designer, Alberta Ferretti , with 14 celebrities choosing her dresses. Among these stars is Brazilian supermodel Alessandra Ambrosio , who wore a flowy pink gown that featured a structured bodice with floral detailing and a matching cape, and the Festival’s “godmother” Rocío Muñoz Morales , who chose an equally flowy red dress for her appearance on the third day’s red carpet.

Further down the list, Gucci is fourth with 12 looks, while Miu Miu closes the top five, dressing eight stars.

“The most interesting thing about the data is probably the large difference between Armani’s numbers and the rest. So far, this year’s Venice Film Festival seems to be ruled by the Italian designer, as 45 celebrities opted for a gown or a suit that bears his name,” a spokesperson for Chrono 24 said.

The Best Fashion Looks at the 2021 Venice Film Festival

“This, together with the different ages and backgrounds of the stars who wore them, is a statement to an all-time classic style which seems ageless and knows no boundaries.”

The study was conducted by Chrono 24, the leading marketplace for luxury watches since 2003, providing easy, safe, and reliable market access to all watch enthusiasts worldwide.

Collecto, the Venezuelan-owned exclusive wedding registry is the home for the new tableware collection by Colombian fashion designer Johanna Ortiz. This collection, titled ‘Entre Rios’ launched earlier this year, is Ortiz’s way of styling a table setting with her signature colorful and tropical designs. Designer Johanna Ortiz, who has...
10 DAYS AGO
HOLAUSA

To celebrate the holidays, Kylie Jenner participated in a time-honored tradition of cool aunts everywhere; letting the kids do her makeup. The moment was captured in a TikTok led by North West, where she and two of her younger cousins were in charge of doing their aunt’s makeup....
4 DAYS AGO
HOLAUSA

Shawn Mendes sparks romance rumors with Jocelyne Miranda: Who is she?

It seems Shawn Mendes is ready to find love again. The 24-year-old singer has been spotted multiple times with Dr Jocelyne Miranda, amid rumors of a new romance between the 50-year-old celebrity chiropractor and the singer. ...
LOS ANGELES, CA・6 DAYS AGO
HOLAUSA

It seemed like William Levy and Elizabeth Gutiérrez’s relationship had come to an end; But the actors were seen together on a trip to Spain, which has raised suspicions of a possible reconciliation. Unlike other occasions, the trip did not seem to include their children Christopher and Kailey. ...
7 DAYS AGO
HOLAUSA

Break with Harry Styles has reportedly been ‘difficult’ for Olivia Wilde; she is ‘disappointed’

Even with special salad dressing a break between lovers can come with heartache. Days after it was revealed that Olivia Wilde and Harry Styles are taking a break, a source has shared insight into how the actress is doing. Styles and Wilde’s whirlwind relationship came with drama, memes, and...
6 DAYS AGO
HOLAUSA

All of Thalía’s spectacular looks at the 2022 Latin GRAMMY

Thalía had a spectacular night at this year’s Latin GRAMMY Awards. The singer hosted the 23rd edition of the awards along with Luis Fonsi, Laura Pausini, and   Anitta. On the red carpet and stage, the iconic Mexican singer of “Tú y Yo” looked stunning in all her...
7 DAYS AGO
HOLAUSA

Princess Caroline ’s children and grandchildren came together on Saturday to celebrate Monaco’s National Day. While Charlotte Casiraghi , Beatrice Borromeo and Tatiana Casiraghi wowed with their fashion on Nov. 19, it was their young kids who adorably stole the show in their outfits and waving from the palace. ...
7 DAYS AGO
HOLAUSA

Pete Davidson is not the only one who has game. Emily Ratajkowski has people wondering and hoping she is playing the field- dating both the comedian and DJ Orazio Rispo. The model has been spotted hanging out with both of them within days of each other. ...
NEW YORK CITY, NY・6 DAYS AGO
HOLAUSA

Sofia Vergara and Joe Manganiello are undeniably one of the most fan-favorite couples in Hollywood! The pair are celebrating their 7th wedding anniversary, and Sofia decided to share some special photos from their important day. The pair tied the knot in 2015 at The Breakers Resort in Palm...
PALM BEACH, FL・5 DAYS AGO
HOLAUSA

Katie Holmes wore a stunning and elegant outfit while out in New York. The actress, writer, and director was photographed while out on a walk in the ciry, wearing an elegant Falconeri outfit that’s the perfect representation of Fall. RELATED: Katie Holmes wears a dress...
NEW YORK STATE・5 DAYS AGO
HOLAUSA

Bad Bunny makes a move on a Colombian TikTok model

Bad Bunny reached out to one of his concertgoers after he saw her video on TikTok. The clip was shared by Sara Orrego, who recorded herself at his concert singing and having a great time. RELATED: Another win for the culture! Bad Bunny is Apple...
5 DAYS AGO
HOLAUSA

This past week, model Emily Ratajkowski was spotted walking early in the morning in SoHo, New York City. The gorgeous 31-year-old, who recently made headlines for going on a date with Kim Kardashian’s ex, Pete Davidson, wore the perfect fall-winter transitional outfit. Emily ﻿known for her NY chic and...
NEW YORK CITY, NY・7 DAYS AGO
HOLAUSA

During Thanksgiving, just like us, many celebrities are surrounded by all their loved ones. When it comes to celebrating, nobody does it better than the Estefans. This famous dynasty gathered in New York to participate in the annual Thanksgiving Macy’s Parade. Emilio, Gloria, Lili and more members of...
NEW YORK STATE・3 DAYS AGO
HOLAUSA

Kate has first tiara moment as Princess of Wales

The Princess of Wales dazzled in a tiara for the first time in nearly three years on Tuesday. Catherine wore her go-to Queen Mary’s Lover’s Knot tiara to﻿ a state banquet held at Buckingham Palace for South African President Cyril Ramaphosa. RELATED: The Princess of Wales looks...
6 DAYS AGO
HOLAUSA

Ariana Grande is blonde in a new fragrance commercial

Ariana Grande is the face of a new fragrance developed by Ulta Beauty. The 19 year old singer and actress shared some photos and a video, which spotlight her newly dyed blonde hair. RELATED: Ariana Grande has sold her impressive Montecito estate for $9.1 million [PHOTOS] ...
7 DAYS AGO
HOLAUSA

Lele Pons is in full wedding planning mode! The singer said “yes” to Guaynaa’s proposal on stage at Tomorrowland on July 31, and four months later, she already has a wedding dress. On Monday, Lele shared photos posing in Paris along with adorable snaps at the bridal...
NEW YORK STATE・11 HOURS AGO
HOLAUSA

Justin Bieber is celebrating his wife’s birthday. Hailey Bieber is turning 26 and Justin took a moment to share a sweet message with the world, while also providing an update on their activities and current location. RELATED: Justin Bieber and Hailey Bieber become pawrents...
6 DAYS AGO
HOLAUSA

Judy Reyes talks about the global success of her movie ‘Smile’

Judy Reyes has built a prolific career in TV and film. Catapulted by her work in the beloved sitcom “Scrubs,” where she played the role of nurse Carla Espinosa for eight seasons, over the course of her three decades in the industry, Reyes has dabbled in various...
6 DAYS AGO
HOLAUSA

Leonardo DiCaprio celebrates major achievement in Mexico: The ‘resurrection’ of the skiffia fish

Leonardo DiCaprio is celebrating a major achievement in Mexico! The Hollywood star has been using his platform to share a very important issue that involves Mexico’s waters and the current state of the world’s environment. Conservationists from North and Latin America joined global experts from the UK, to...
15 HOURS AGO