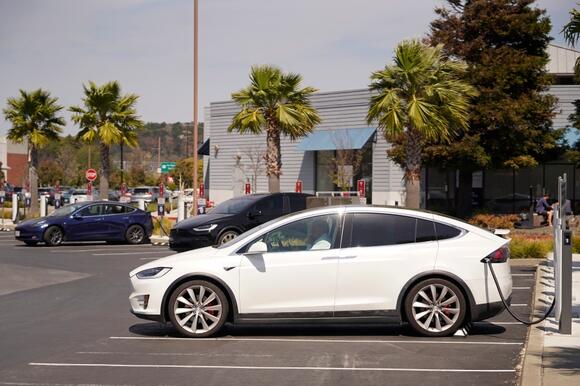 MINNEAPOLIS (AP) — Seventeen states with vehicle emission standards tied to rules established in California face weighty decisions on whether to follow that state’s strictest-in-the nation new rules that require all new cars, pickups and SUVs to be electric or hydrogen-powered by 2035.

Under the Clean Air Act, states must abide by the federal government’s standard vehicle emissions standards unless they at least partially opt to follow California’s stricter requirements.

Affordable electric cars? Here are the best EV SUVs under $50,000

Among them, Washington, Massachusetts, New York, Oregon and Vermont are expected to adopt California’s ban on new gasoline-fueled vehicles. Colorado and Pennsylvania are among the states that probably won’t. The legal ground is a bit murkier in Minnesota, where the state’s “Clean Cars” rule has been a political minefield and the subject of a legal fight. Meanwhile, Republicans are rebelling in Virginia.

The Minnesota Auto Dealers Association says its reading of state and federal law is that the new California rules kick in automatically in the state, and it’s making that case in court as it tries to block them.

“The technology is such that the vehicles just don’t perform that well in cold weather,” said Scott Lambert, the trade group’s president. “We don’t all live in southern California.”

Minnesota Pollution Control Agency officials say the state would have to launch an entirely new rulemaking process to adopt California’s changes. And in court filings and legislative hearings, they’ve said they are not planning to do that now.

“We are not California. Minnesota has its own plan,” Gov. Tim Walz said in a statement. He called Minnesota’s program “a smart way to increase, rather than decrease, options for consumers. Our priority is to lower costs and increase choices so Minnesotans can drive whatever vehicle suits them.”

“While the governor shares the goal of rapidly moving towards electric vehicles, he is skeptical about requiring 100% of cars sold to be electric by a certain date as technology is rapidly changing,” the Colorado Energy Office said in a statement.

Virginia had been on a path to adopting California’s rules under legislation that passed last year when Democrats were in full control of Virginia’s government. But Republicans who control the House of Delegates and GOP Gov. Glenn Youngkin say they’ll push to unlink their state.

Minnesota’s auto dealers are trying to make their state’s current rules — and the possibility that they could tighten to incorporate California’s new restrictions — an issue for the fall elections. Control of the Legislature and governor’s office are up for grabs, and the dealers hope to persuade the 2023 Legislature to roll back the regulations unless they win in court first, Lambert said.

The MPCA, with Walz’s support, adopted California’s existing standards through administrative rulemaking last year amid a bitter fight with Republican lawmakers who were upset that the Legislature was cut out of the decision. Legislators even tried unsuccessfully to withhold funding from Minnesota’s environmental agencies. One casualty was Laura Bishop, who resigned as MPCA commissioner after it became apparent that she lacked the votes in the GOP-controlled Senate to win confirmation.

Walz and his administration have framed Minnesota’s Clean Cars rule as a fairly painless way to increase the availability of electric vehicles and help the state meet its greenhouse gas reduction goals. The rule seeks to increase the offerings of battery-powered and hybrid vehicles starting with the 2025 model year by requiring manufacturers to comply with California standards currently in force for low- and zero-emission vehicles.

Lambert said the state’s auto dealers don’t oppose electric vehicles. They currently make up 2.3% of new vehicle sales in Minnesota and he expects consumer interest to continue to grow. But the reduced range of battery-powered vehicles in cold weather makes them less attractive in northern tier states, he said. Minnesota’s rules already threaten to saddle dealers with more electric vehicles than their customers will buy, he said, and adopting the California ban would make things worse.

Under federal law, by Lambert’s reading, states have to either adopt California’s rules in full or follow less stringent federal emission standards. He said they can’t pick and choose from parts of each. And that effectively means there’s a “ban on the books” in Minnesota for sales of new conventionally fueled vehicles starting with the 2035 model year, he said.

Lambert’s association was already fighting Minnesota’s existing Clean Car rules in the Minnesota Court of Appeals, and its petition foresaw that California would make the changes it announced late last month. A key issue in whether “any future amendments to the incorporated California regulations automatically become part of Minnesota rules,” as the dealers argue.

The MPCA’s attorneys assert that they don’t, and have asked the court to dismiss the challenge. MPCA Commissioner Katrina Kessler has made similar arguments for months, including before a skeptical state Senate committee last March.

Aaron Klemz, chief strategy officer for the Minnesota Center for Environmental Advocacy, which will be filing its own arguments against the dealers in court, acknowledged that the legal landscape is confusing. And he said it’s not clear whether his group will eventually call for Minnesota to follow California’s new ban.

“We haven’t done enough analysis of the California rule to know if we’re going to push for its adoption in Minnesota,” Klemz said. He noted that other issues are coming into play, including incentives for electric vehicles in the Inflation Reduction Act that President Joe Biden recently signed, and the stated intentions by some of the major automakers to go all-electric.

Absolutely horrible... we cannot let that happen! It is the governments way to control you & keep you grounded! If there is No power ... you cannot charge your vehicle & you cannot go anywhere.. We need to stop this in its tracks!!!

Ok that’s too stupid. We have some cold weather up here, not ideal for electric. What about all the gas stations they want to put out of business? We NYers don’t like to waste time. EVs do not help the environment, making the batteries pollute horribly and how are you going to recycle all them?

Pushing people to the limit, then wonder why there's the feeling of rebellion. I know most of the people in my social circle can barely afford well used automobiles let alone new electric ones. Maybe there's something to conspiracy theories about complete 💯 control. Just my opinion 🤔

REPORT: New York ranks among healthiest states in US

A new report by Forbes Advisor lists the least healthy populations. Although not at the top of the list, New York ranked 42nd, making it the ninth healthiest state in the U.S.
ALABAMA STATE・1 DAY AGO
News 8 WROC

Former Vice President Mike Pence on Friday said he takes “full responsibility” for classified documents ending up at his home in Indiana and pledged to cooperate with any investigation into how it happened. “During the closing days of administration, when materials were boxed and assembled, some of which were shipped to our personal residence, mistakes […]
INDIANA STATE・3 HOURS AGO
News 8 WROC

Google lays off in-house massage therapists in latest round of job cuts: report

New Yorkers are pushing for legislation that would raise the minimum wage to $21.25 an hour by 2027. Currently the state’s minimum wage is set at $14.20 an hour, or in certain parts of the state, $15 an hour. In her State of the State Address, Governor Hochul said she wants to index wages  to match the rising cost of inflation, but advocates say they want to see an overall increase in the state's minimum wage and then index it to match inflation.
2 DAYS AGO
News 8 WROC

According to the American Lung Association's 21st-annual "State of Tobacco Control" report, released on Wednesday, New York State is in a position to solidify its leadership role on tobacco control policies.
NEW YORK STATE・2 DAYS AGO
News 8 WROC

ALBANY,N.Y. (WTEN)– Four bills that would enact reproductive health protections made it through the Senate on Tuesday. One sponsored by Senator Shelley Mayer, expands on previous legislation regarding health care providers. “My bill creates explicit protections for reproductive healthcare provided via telehealth and telehealth services by New York physicians and providers,” said Mayer. “And in […]
2 DAYS AGO
News 8 WROC

HENRIETTA, N.Y. (WROC) — Demand for new firefighters for both paid and volunteer positions is the highest it’s been in years at fire departments around the Greater Rochester Area and State of New York. But attracting a new field of recruits will require sorting through more complex issues compared to what other first responding agencies […]
ROCHESTER, NY・1 DAY AGO
News 8 WROC

ROCHESTER, N.Y. (WROC) — The nurses union at Rochester General Hospital is continuing calls on leadership to settle a fair contract for workers. It follows an ongoing staffing crisis, where nurses say their needs aren’t being met. This, in addition to the recent debate from lawmakers of a continuation on New York’s vaccine mandate for […]
ROCHESTER, NY・1 DAY AGO
News 8 WROC

ROCHESTER, N.Y. (WROC) — It’s not just the lack of snow that’s been having an effect on the community, but the lack of ice on Lake Ontario has been having an impact as well, and it goes beyond the winter activities that require snow. The snowflakes may have been flying this week, but ice cover […]
2 HOURS AGO
News 8 WROC

ROCHESTER, N.Y. (WROC) — The New York Department of Labor has been awarded $105 million in federal funding for their YouthBuild program, NY Senator Kirsten Gillibrand announced Wednesday, a $6 million increase from 2022. Through YouthBuild, young people ages 16-24 have the opportunity to participate in a variety of job training and education opportunities. In […]
ROCHESTER, NY・2 DAYS AGO
News 8 WROC

Two conjoined twin girls who shared a liver were successfully separated Monday in a Texas hospital.
FORT WORTH, TX・1 DAY AGO
News 8 WROC

ROCHESTER, N.Y. (WROC) — The Landmark Society of Western New York unveiled its 2022-23 “Five to Revive” list Wednesday. The local landmarks up for consideration this year are the Hotel Cadillac, the Mt. Hope Cemetery Chapel, the City of Rochester’s urban tree canopy, the Willard State Hospital in Seneca County, and the John Wenrich Cabin […]
ROCHESTER, NY・2 DAYS AGO
News 8 WROC

24 girls wrestlers from Section V will compete in the event
CANANDAIGUA, NY・22 HOURS AGO
News 8 WROC

Rep. Santos to get his own talking bobblehead, complete with Pinocchio nose

It’s no lie — Rep. George Santos is poised to be immortalized as a talking bobblehead, complete with a feature that plays some of the New York Republican’s “biggest lies.”
NEW YORK STATE・1 DAY AGO
News 8 WROC

PERINTON, N.Y. (WROC)— A year ago Wednesday, the fire that ripped through the Pines of Perinton displaced 65 residents and destroyed a total of 18 apartment units. On the evening of the anniversary, the Town of Perinton honored those who responded to the blaze, and those who provided relief. The town hailed this occasion, saying […]
PERINTON, NY・1 DAY AGO
News 8 WROC

MLK series in Pittsford does more than celebrate Dr. King

Several years ago, after spearheading the creation of an MLK proclamation in the Town of Pittsford, former Pittsford board member Kevin Beckford asked for something else.
TOWN OF PITTSFORD, NY・4 HOURS AGO
News 8 WROC

The first event will be the screening of a documentary on the rise and fall of the Clarissa Street Neighborhood in Rochester.
TOWN OF PITTSFORD, NY・1 DAY AGO
News 8 WROC

Sophomore Gabrielle Brown-Sturdviant led the way for the Eagles with 25 points
CHURCHVILLE, NY・22 HOURS AGO