‘Nobody does anything’: New Portland resident, Timbers employee feels unsafe in city 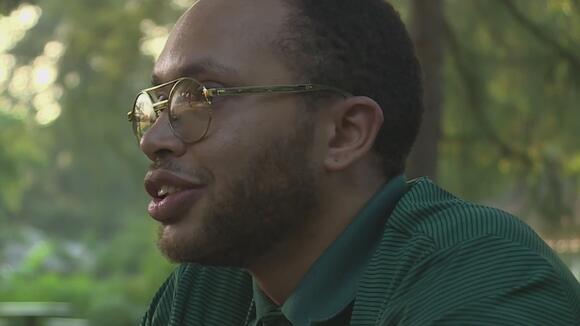 Demetryus Bright recently took a job with the Portland Timbers as an account executive and moved his family from Ohio to Portland, hoping to escape the rampant gun violence. But after four months, his wife already wants their family to leave.

Bright says the homeless camps in the South Tabor neighborhood have him fearing for his family’s safety and that his car and home have been vandalized. He also said there have been fires on the street, including one that took place Tuesday night.

“It’s kind of disappointing. I worked hard to get where I’m at, to move my family 36 hours, to deal with this? No,” he said. “Gunshots and gun violence and that’s one reason we moved, to get away from stuff like that. And to feel safe walking to school, and to move to a nice neighborhood but it’s like there are people doing narcotics sitting outside. We can’t let our kids go outside and play on the front porch, let alone walk to school.”

Bright told KOIN 6 News that issues with the homeless have gotten so bad, that his wife now wants to take their children and move back to Ohio. His dilemma comes as Metro released data today outlining the progress made through their Supportive Housing Fund.

Backed by the Tri-County Homeless Services tax on high-income earners and big business, the fund, which was approved by voters in May of 2020, aims to address the homeless crisis through expanding services.

According to the data released Wednesday, in the year following the program’s start, the Metro Supportive Housing fund has helped more than 1,600 homeless people move into stabilized housing, protected roughly 9,200 people from being evicted and generated more than 500 new shelter beds.

However, some families, like Bright’s, still feel that they are not safe.

“This is a huge amount of folks into housing, but if we can’t keep up with the number of folks who fall into homelessness, we’re going to just tread water. That’s how you can see these big numbers and still feel like there’s a crisis on our streets, because we haven’t shut off the spigot, we’ve only made a bigger bucket to help people,” said Denis Theriault, the deputy communications director for Multnomah County.

But despite the encouraging numbers, Bright says as a new resident, he feels the city is not doing enough.

“Nobody does anything about anything here. When my car got vandalized, when my house got vandalized the police officer said ‘welcome to Portland,'” Bright said.

The City has released information on what a great job they are doing in Portland? What fantasy author at the City issued this? Someone on Wheeler's or Hardesty's or Schmidt's re election campaign staff? WTF! This must be why the City is hiring a private security company. Because things are improving. Hahaha!

thank your mayor and Hardesty in the county. this a direct result of not responding to the riots and keeping tons of people who should have been arrested and prosecuted put on the streets.

Oh it’s suddenly matters. Because he said something. Know what will happen is you’ll just vote for another Democrat and assume the same thing will somehow work out. I just left upstate New York and I understand why they vote Democrat because they have none of the problems that we do relative to the size. This is an angry crazy city. Vote differently do something about it and if it doesn’t work out at least you took another route insanity is doing the same thing over and over and expecting a different result people. I only on a few companies are successful but I’m probably a moron. You know

One of downtown Portland’s worst eyesores, O’Bryant Square at Southwest Park Avenue and Harvey Milk Street, is about to get a makeover.
PORTLAND, OR・1 DAY AGO
KOIN 6 News

Gov. Tina Kotekll took a closer look at production underway in Portland for a new type of modular home that could end up creating new homes in record time.
PORTLAND, OR・23 HOURS AGO
KOIN 6 News

A local business owner is breathing a sigh of relief tonight after he says his stolen RV was recovered.
PORTLAND, OR・23 HOURS AGO
KOIN 6 News

In December 2020, Executive Director Scott MacEachern told KOIN 6 that just $3 million was needed to buy the house.
PORTLAND, OR・1 DAY AGO
KOIN 6 News

The downtown area is about 60% recovered from pre-pandemic pedestrian traffic levels.
PORTLAND, OR・2 DAYS AGO
KOIN 6 News

Proud Mary Coffee — with locations in Australia; Portland, Oregon; and Austin, Texas — has doubled down (or perhaps tripled down?) on the “coffee has become too expensive” cliché by offering a cup of coffee for $150.
AUSTIN, TX・1 DAY AGO
KOIN 6 News

Portland Mayor Ted Wheeler issued an emergency declaration Thursday in response to more than 600 city employees planning to go on strike in February.
PORTLAND, OR・1 DAY AGO
KOIN 6 News

Vacasa says 33, not 240, Portland employees will lose their jobs

Vacasa is backtracking on information it issued Wednesday. It now says only about 33 Portland employees will be laid off from the company. That’s a fraction of the number it previously reported.
PORTLAND, OR・2 DAYS AGO
KOIN 6 News

PORTLAND, Ore. (KOIN) — Essance Skincare is a specialty handcrafted herbal, organic, and vegan skincare company in Portland, with the mission to connect humans to the raw beauty of our ancestors through products, services, and events from the heart to the skin. Essance Skincare founder, Jasmine Tran, and Advisor Lori Peck joined Everyday Northwest to share more […]
PORTLAND, OR・1 DAY AGO
KOIN 6 News

Hundreds of protesters, outraged over the death of Tyre Nichols in Memphis, took to the streets of Portland Friday night hours after body cam and surveillance footage was released by investigators.
PORTLAND, OR・19 HOURS AGO
KOIN 6 News

Charles Riley is a salesperson for Farm & Wild. However, he doesn't just sell the mushrooms. He's also a forager, often going out for miles to get them.
PORTLAND, OR・1 DAY AGO
KOIN 6 News

Gym rats know that a new year means a new rush of resolutioners looking to burn off some holiday heft before summer. Unfortunately, Portland isn’t the best town for outdoor winter workouts with its consistently cold temperatures and ark-worthy periods of rain.
PORTLAND, OR・2 DAYS AGO
KOIN 6 News

More than 11 years ago, Leonard James Irving was shot to death in Northeast Portland, leaving behind 3 young children. Until Wednesday, no one had been arrested in connection with his death.
PORTLAND, OR・8 HOURS AGO
KOIN 6 News

Businesses are fed up with crime and vandalism in Woodstock and taking matters into their own hands.
PORTLAND, OR・2 DAYS AGO