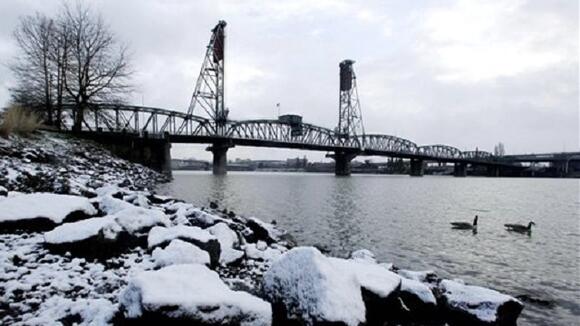 PORTLAND, Ore. ( KOIN ) — The Old Farmer’s Almanac has released its winter weather predictions for the 2022-2023 season.

According to North America’s oldest continuously published periodical , winter will be mild and a little dry for much of the Pacific Northwest.

This is a slightly different prediction compared to the competing Farmer’s Almanac publication, which predicts more normal precipitation levels for the Pacific Northwest.

For much of Central and Eastern Oregon, the Almanac is also predicting a winter with ample rain and temperatures that hover several degrees above the historical average. This will reportedly not be the case for the central, southern and eastern states.

“The 2023 Old Farmer’s Almanac is telling ‘A Tale of Two Tale of Two Winters’ because — as the large U.S. map above shows — the weather this winter will split the country in two,” the publication stated. “Your region will be very cold or mild.”

The almanac is also predicting a warm-than-usual summer with extra rain for the Pacific Northwest.

Stay in-the-know with Oregon and Southwest Washington’s weather from the KOIN 6 Weather team.

Climate change is a hoax. It's just propaganda for idiots to fund the liberal NWO that will give the elites EVERYTHING while Americans suffer.

folks go do some reading and research we have had droughts have had land bridges the whole damn earth 🌎 was covered in water the poles were jungles we have had 5 major ice ages. the poles have shifted in the past. look at what they are finding as the water 💧 recedes and where they find dinosaurs 🦕 bone and prints. look back at the Nile

An arctic blast is on its way to Oregon and Washington Saturday evening. Now is the time to get the winter weather supplies ready as freezing temperatures could make for some slick spots late Saturday night into Sunday morning.
PORTLAND, OR・1 DAY AGO
KOIN 6 News

Freezing nights ahead, windows of snow possible in Portland

A blast of frigid, arctic air will bring an extended period of subfreezing nights and bitterly cold days to the greater Portland area on Saturday.
PORTLAND, OR・1 DAY AGO
KOIN 6 News

Charles Riley is a salesperson for Farm & Wild. However, he doesn't just sell the mushrooms. He's also a forager, often going out for miles to get them.
PORTLAND, OR・1 DAY AGO
KOIN 6 News

Proud Mary Coffee — with locations in Australia; Portland, Oregon; and Austin, Texas — has doubled down (or perhaps tripled down?) on the “coffee has become too expensive” cliché by offering a cup of coffee for $150.
AUSTIN, TX・1 DAY AGO
KOIN 6 News

PORTLAND, Ore. (KOIN) — Essance Skincare is a specialty handcrafted herbal, organic, and vegan skincare company in Portland, with the mission to connect humans to the raw beauty of our ancestors through products, services, and events from the heart to the skin. Essance Skincare founder, Jasmine Tran, and Advisor Lori Peck joined Everyday Northwest to share more […]
PORTLAND, OR・1 DAY AGO
KOIN 6 News

Arctic blast brings snow chances back to Portland this weekend

Another round of arctic air is on its way to the Portland metro area this weekend. The chance of snow in places like downtown become increasingly more likely as lingering rain showers coincide with freezing temperatures.
PORTLAND, OR・3 DAYS AGO
KOIN 6 News

Gas rates are up, but regional utility companies say they could be higher

Together, PGE and NW Natural serve over 3 million customers in the Pacific Northwest.
OREGON STATE・1 DAY AGO
KOIN 6 News

Tulip bulbs have begun to sprout at the Wooden Shoe Tulip Farm in Woodburn, signaling that spring is on the horizon in Oregon.
WOODBURN, OR・1 DAY AGO
KOIN 6 News

One of downtown Portland’s worst eyesores, O’Bryant Square at Southwest Park Avenue and Harvey Milk Street, is about to get a makeover.
PORTLAND, OR・1 DAY AGO
KOIN 6 News

Gov. Tina Kotekll took a closer look at production underway in Portland for a new type of modular home that could end up creating new homes in record time.
PORTLAND, OR・23 HOURS AGO
KOIN 6 News

This is is the first U.S. airline to end the use of plastic cups on board.
PORTLAND, OR・2 DAYS AGO
KOIN 6 News

The downtown area is about 60% recovered from pre-pandemic pedestrian traffic levels.
PORTLAND, OR・2 DAYS AGO
KOIN 6 News

After a “tripledemic” with COVID, the flu and RSV, experts predict the rapid spike of the new XBB.1.5 COVID-19 strain may cause another surge in cases.
PORTLAND, OR・1 DAY AGO
KOIN 6 News

There's plenty of Lunar New Year celebrations happening around Portland, but only one that travelers will get to experience.
PORTLAND, OR・1 DAY AGO
KOIN 6 News

These are the worst U.S. states to drive in, report says

Traffic, road conditions and the cost of vehicle maintenance are all things that can make drivers grip the steering wheel a bit tighter. These conditions vary across states for a variety of reasons including population, weather and government investments.
PORTLAND, OR・2 DAYS AGO
KOIN 6 News