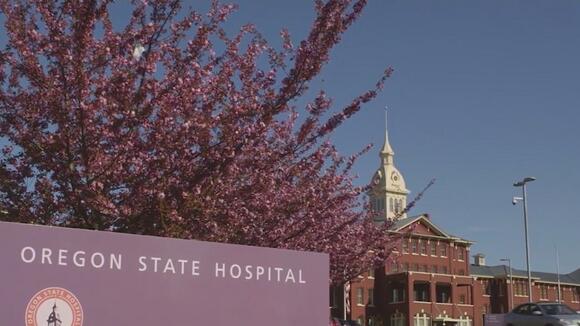 PORTLAND, Ore. (AP) — A federal judge has ruled that the Oregon State Hospital must impose strict limits on the length of time it treats patients accused of crimes who need mental health treatment.

Effective immediately, the hospital must release “aid-and-assist” patients accused of misdemeanors within 90 days of admission, and those accused of felonies within six months of admission. Aid-and-assist are patients found by a judge unable to participate in their own defense at trial.

The judge’s decision overrules an Oregon law that says the hospital can hold an aid-and-assist patient for up to three years, or the maximum amount of time that a person could have been sentenced to prison for their alleged crime, whichever is shorter.

The hospital has struggled to meet that timeline, and the COVID-19 pandemic exacerbated the problem.

The hospital said approximately 100 people should be discharged immediately under the new timeline. They will be released to treatment centers in their home counties over the next six months, according to state hospital spokesperson Amber Shoebridge.

The request to strictly limit treatment times was based on a court-ordered review of the state hospital’s admissions policies conducted this year by Michigan-based mental health expert Dr. Debra Pinals.

Pinals’ report suggested the hospital gradually decrease its wait times for patients, aiming for an average of 22 days or fewer at the start of August; 11 days by January; and to be back in compliance with the 2000 federal court order, averaging 7 days or fewer, by mid-February.

The hospital was not on track to meet that goal, prompting Disability Rights Oregon to request new admissions guidelines.

Cooper, the Disability Rights Oregon attorney, said a lack of community mental health beds remains a problem, but a recent surge of state funds dedicated to mental health services should help accommodate patients as they return to their home counties.

Corporate cannabis giant shuts down facilities in Oregon, 2 other states

Curaleaf Holdings, Inc., one of the largest cannabis companies in the U.S., announced on Jan. 26 that it plans to close a majority of its operations in Oregon, California and Colorado later this month in order to “streamline” its profits.
OREGON STATE・23 HOURS AGO
KOIN 6 News

After a rocky start, the 118th congress has selected members for the different house committees, with multiple Oregon representatives making appearances in the selections.
OREGON STATE・23 HOURS AGO
KOIN 6 News

‘About a dozen’ Oregon nurses connected to fake diploma scheme, board says

The FBI and the National Council of State Boards of Nursing are investigating thousands of nurses accused of paying money to receive diplomas without actually completing the courses.
OREGON STATE・1 DAY AGO
KOIN 6 News

A state lawmaker in Oregon is using thousands of pages of redacted documents he sought for more than a year to launch legislation demanding more accountability and oversight of a primate research facility with a long history of complaints.
OREGON STATE・2 DAYS AGO
KOIN 6 News

For a state that is known for its rainy weather and plentiful streams of water, it may come as a surprise to learn that many Oregonians are facing a water insecurity, according to a new report from the Secretary of State's Office.
OREGON STATE・2 DAYS AGO
KOIN 6 News

Every state in the country is coming up with solutions to combat the teacher shortage.
ARIZONA STATE・1 DAY AGO
KOIN 6 News

The 21+ Tobacco and Vapor Retail Association of Oregon filed a lawsuit against Multnomah County for banning flavored tobacco and vaping products containing nicotine.
PORTLAND, OR・2 DAYS AGO
KOIN 6 News

These are the worst U.S. states to drive in, report says

Traffic, road conditions and the cost of vehicle maintenance are all things that can make drivers grip the steering wheel a bit tighter. These conditions vary across states for a variety of reasons including population, weather and government investments.
PORTLAND, OR・2 DAYS AGO
KOIN 6 News

For nearly three years, households have been receiving an additional $95 or more on top of their normal allotment. But that extra money is set to expire next month.
OKLAHOMA STATE・2 DAYS AGO
KOIN 6 News

A slate of gun control proposals took a major step forward Friday when the committees in the Washington State House moved them to consideration by the full House.
WASHINGTON STATE・22 HOURS AGO
KOIN 6 News

More than 11 years ago, Leonard James Irving was shot to death in Northeast Portland, leaving behind 3 young children. Until Wednesday, no one had been arrested in connection with his death.
PORTLAND, OR・7 HOURS AGO
KOIN 6 News

After a “tripledemic” with COVID, the flu and RSV, experts predict the rapid spike of the new XBB.1.5 COVID-19 strain may cause another surge in cases.
PORTLAND, OR・1 DAY AGO
KOIN 6 News

Portland Mayor Ted Wheeler issued an emergency declaration Thursday in response to more than 600 city employees planning to go on strike in February.
PORTLAND, OR・1 DAY AGO
KOIN 6 News

Vacasa says 33, not 240, Portland employees will lose their jobs

Vacasa is backtracking on information it issued Wednesday. It now says only about 33 Portland employees will be laid off from the company. That’s a fraction of the number it previously reported.
PORTLAND, OR・2 DAYS AGO