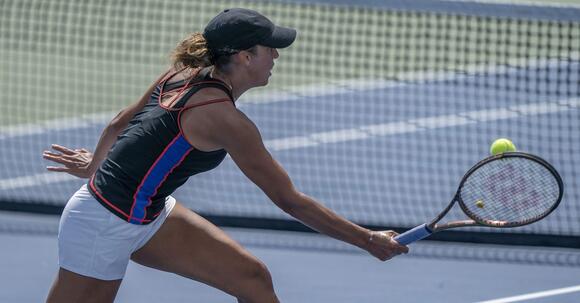 Having dispatched world number one Iga Swiatek in the third round, the 27-year-old Keys carried that momentum into the quarter-finals with a dominating win over 25th-ranked Rybakina.

Both Keys and Rybakina had reached the last eight without dropping a set and it would be the American keeping the unblemished record.

"I knew she is a remarkable player and she can turn it around at any moment so I knew I had to try to stay out in front because at any moment she can go on a roll," said Keys, finalist at the 2017 U.S. Open.

"I think that is kind of the key against her. If you back off at all then she gets to dictate and run you around."

One of the WTA Tour's big-hitters, ranking number two on the season ace list, Rybakina struggled with her serve the entire match, hitting just one ace while piling up four double faults.

In the first contest on a muggy Centre Court, Keys, Cincinnati champion in 2019, got out to a flying start breaking Rybakina twice on the way to a 4-0 lead before the Kazakhstan player was finally able to hold serve.

After surrendering the opener Rybakina rallied in the second with an early break to jump out in front 2-0.

But Keys dug in, sweeping the next five games to retake control 5-2 and after a late wobble closed out the contest on her fourth match point when Rybakina hit her return into the net.

Later, twice Wimbledon champion Kvitova reached the last four in Cincinnati for the third time in her career with a business-like 6-2 6-3 victory over Tomljanovic.

The other semi-final will see the only remaining seed number six Aryna Sabalenka take on French qualifier Caroline Garcia, who continued her upset run through the draw with 6-1 7-5 win over seventh seeded American Jessica Pegula.

Reporting by Steve Keating in Toronto and Manasi Pathak in Bengaluru; Editing by Hugh Lawson and Sam Holmes

LONDON, Sept 23 (Reuters) - Play was briefly halted when a man ran on court and set his arm on fire during a Laver Cup match at London's O2 Arena on Friday. The man, protesting about the use of private jets in Britain, sat down and lit a substance on his arm during the match between Stefanos Tsitsipas and Diego Schwartzman.
TENNIS・2 DAYS AGO
Reuters

LONDON, Sept 22 (Reuters) - Some of the most iconic moments of Roger Federer's glittering career featured Rafa Nadal across the net but on Friday his great Spanish rival will be alongside him for his final bow.
TENNIS・2 DAYS AGO

Tennis-Djokovic dazzles on return to action at Laver Cup

LONDON, Sept 24 (Reuters) - Novak Djokovic produced a stunning performance to thrash Frances Tiafoe in his first match since winning Wimbledon in July then teamed up with Matteo Berrettini to put Team Europe in command in the Laver Cup on Saturday.
TENNIS・1 DAY AGO
Reuters

Tennis-Tears flow as curtain comes down on Federer's glittering career

LONDON, Sept 23 (Reuters) - Roger Federer's trophy-laden career ended with defeat on Friday, but for once the result hardly mattered as the Swiss maestro headed into retirement with tears in his eyes and cheers ringing in his ears.
TENNIS・1 DAY AGO
Reuters

LONDON, Sept 24 (Reuters) - Roger Federer may have been one of the sporting world's great communicators over the last two decades but the Swiss confessed he had been dreading being handed a microphone after his glorious career came to a close at the Laver Cup on Friday.
TENNIS・1 DAY AGO
Reuters

LONDON, Sept 23 (Reuters) - Roger Federer's retirement from competitive tennis will leave a void that can never be filled, according to former world number one and seven-time Grand Slam singles champion John McEnroe.
TENNIS・2 DAYS AGO

LONDON, Sept 23 (Reuters) - Fans flocked from far and wide to pay homage to Roger Federer as the Swiss tennis great brought down the curtain on his glittering career at London's O2 Arena on Friday.
TENNIS・1 DAY AGO
Reuters

Sept 24 (Reuters) - Two-time Olympic gold medallist Aksel Lund Svindal said he has been diagnosed with testicular cancer. "The last few weeks have been different. But I'm able to say weeks and not months because of great medical help, a little luck and a good decision," Svindal said on Instagram.
SPORTS・1 DAY AGO
Reuters

Sept 25 (Reuters) - England manager Gareth Southgate, under fire after a disappointing Nations League campaign, said he is nonetheless "the right person" to take the team into this year's World Cup in Qatar.
SOCCER・19 HOURS AGO

LONDON, Sept 24 (Reuters) - India's Jhulan Goswami, the leading wicket-taker in women's ODIs, bowed out of international cricket on Saturday at Lord's after bowling her 10,000th ball in one-day matches, as her side completed a 3-0 series win over England with a controversial final wicket.
WORLD・1 DAY AGO
Reuters

Soccer-More questions than answers as England limp towards World Cup

Sept 23 (Reuters) - World Cup semi-finalists in 2018, European Championship runners-up last year, England were surfing a wave of optimism, but the wheels have come off spectacularly and they now look anything but potential winners in Qatar.
WORLD・2 DAYS AGO
Reuters

Tennis-Part of me leaves with Federer, says emotional Nadal

LONDON, Sept 24 (Reuters) - Sitting courtside Rafa Nadal cried as his great rival, Roger Federer, bid an emotional farewell to tennis at the Laver Cup on Friday, later saying an important part of him was also leaving the men's Tour with the retirement of the Swiss.
TENNIS・1 DAY AGO

Golf-Lack of putting not fight has Internationals in hole, says captain

CHARLOTTE, N.C., Sept 23 (Reuters) - A lack of clutch putting not fight says International captain Trevor Immelman has put his team in the hole they will try to climb out of on Saturday to keep the United States from bringing the Presidents Cup to an early conclusion.
GOLF・1 DAY AGO
Reuters

Golf-U.S have Internationals on the ropes after dominating fourballs

CHARLOTTE, N.C., Sept 23 (Reuters) - International captain Trevor Immelman vowed his men would fight to the final bell in the Presidents Cup but they were outclassed on Friday by the United States who dominated the fourballs by taking four of five points.
GOLF・1 DAY AGO
Reuters

Sept 23 (Reuters) - Lionel Messi scored twice and Argentina dominated Honduras 3-0 on Friday in Miami as the World Cup-bound team continues to fine-tune its game ahead of the upcoming international tournament in Qatar.
SOCCER・1 DAY AGO