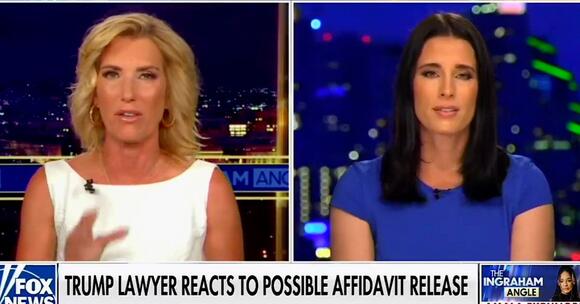 Donald Trump claims all of the documents seized by the FBI from Mar-a-Lago were declassified and in “secure storage” at the resort. But one of the former president’s own attorneys didn’t exactly instill a lot of confidence about just how “secure” that storage was.

“It was a locked door, and getting back down into the basement, there’s security, you can’t just walk down there,” Christina Bobb told Laura Ingraham on Thursday. “Only certain members of staff can get there, and then there’s only one key.”

Bobb added that “a limited number of people” had access to that area:

Certain types of documents ― especially the highly sensitive files reportedly sought by the Justice Department at Mar-a-Lago ― require extremely rigorous security measures, more than a lock and limited access to certain members of staff. Some may even require what’s known as a sensitive compartmented information facility (SCIF).

Trump’s document facility, as described by NewsNation, was “a storage room off an interior hallway near the pool” with “boxes everywhere.”

That pool, The Washington Post noted, was a major part of the social scene at the resort and “a focal point of activity as part of Mar-a-Lago’s day-to-day business.”

On Twitter, Trump’s critics were quick to point out that Bobb’s comments didn’t make it sound like the documents were securely stored and may have only hurt her client’s case:

It was illegal to REMOVE them from the beginning. It was made perfectly clear that the documents, being clearly marked were Top Secret, classified documents. They returned half in February. A whistleblower testified that there were more. Trump attorney sent a letter stating that there were no more. DOJ subpoena didn't spark an immediate response. The DOJ issued a legal search warrant, and returned the documents to the White House, and under the appropriate levels of Security.

"SECURE" OR NOT WH documents were stolen!!! Bottom line...these were NOT his. Just saying they are his doesn't make it true.

Former President Trump responded Wednesday to Russian President Vladimir Putin’s hinting at being willing to use nuclear weapons in Ukraine, saying that the conflict should never have happened and that it could lead to a world war. Trump said on his social media platform Truth Social that the conflict...
POTUS・6 DAYS AGO
abovethelaw.com

Before being known primarily as Donald Trump’s errand boy, Chris Christie was a prosecutor. And he’s using that expertise to issue a warning to Donald Trump: shut your trap. During an appearance on ABC the former New Jersey Governor said the “nonsense arguments” (you know, like that he...
POTUS・1 DAY AGO
HuffPost

Roger Stone, a longtime ally of Donald Trump, told a documentary crew a day before the 2020 election that he was ready for violence. “Fuck the voting, let’s get right to the violence,” he’s heard saying in footage obtained by CNN from filmmakers Christoffer Guldbrandsen and Frederik Marbell. “Shoot to kill. See an antifa? Shoot to kill. Fuck ’em. Done with this bullshit.”
POTUS・16 HOURS AGO

Former New Jersey Gov. Chris Christie (R) said if Donald Trump keeps making “nonsense arguments” on TV about the Justice Department investigation into his handling of classified documents, he might just find himself facing a “self-inflicted indictment.”. “I think these are all self-inflicted wounds by Donald Trump,”...
POTUS・1 DAY AGO
Business Insider

Patriarch Kirill I said Russian soldiers who die in the war will be absolved of "sins." The Sunday sermin came days after Russia announced the mobilization of 300,000 troops. Kirill is known to support Russian President Vladimir Putin and the invasion of Ukraine. The leader of the Russian Orthodox Church...
RELIGION・23 HOURS AGO
HuffPost

Fetterman's tattoos commemorate those who died violently when he was mayor of Braddock, Pennsylvania.
PENNSYLVANIA STATE・1 DAY AGO
Daily Mail

Former liberal MSNBC host and sportscaster Keith Olbermann revealed on Monday that he'd dated Democratic Arizona Senator Kyrsten Sinema over a decade ago. Olbermann, who currently hosts a podcast, didn't spare his disappointment with the moderate senator, claiming that she previously was even more liberal than him. The ex-SportsCenter and...
ARIZONA STATE・18 HOURS AGO

Ted Cruz Refuses To Endorse Donald Trump At The RNC

Hundreds of newly revealed text messages proposing strategies to overturn the 2020 presidential election that were turned over to the House Jan. 6 committee by Donald Trump’s former White House chief of staff Mark Meadows are now clarifying his alleged role in the effort, according to The Guardian. Many...
PRESIDENTIAL ELECTION・10 HOURS AGO
HuffPost

Rep. Liz Cheney (R-Wyo.) said she will say goodbye to being a Republican if former President Donald Trump becomes the party’s nominee for president in 2024. Cheney, who was removed from her House Republican Conference chair role following her support of Trump’s impeachment over the Jan. 6, 2021, Capitol riot, vowed on Saturday to make sure Trump isn’t “anywhere close to the Oval Office.”
U.S. POLITICS・2 DAYS AGO
HuffPost

Former President Donald Trump said the “rich friends” he acquired from his presidency made it all worth it to him, according to an excerpt from reporter Maggie Haberman’s upcoming book published in The Atlantic on Sunday. “The question I get asked more than any other question: ‘If...
POTUS・2 DAYS AGO

WASHINGTON (AP) — The House committee investigating the Jan. 6 attack on the U.S. Capitol announced Tuesday that it had postponed a hearing scheduled for Wednesday as a hurricane hurtled toward the Florida coast. The committee had planned to hold what was likely to be its final investigative hearing...
FLORIDA STATE・3 HOURS AGO
HuffPost

Abigail Spanberger, an endangered House Democrat, has tried to emphasize her GOP opponent Yesli Vega's "extreme" views on abortion in one of the nation's most competitive districts.
VIRGINIA STATE・1 DAY AGO
HuffPost

One MSNBC host issued a warning about the 2024 election if Republicans gain control of the House of Representatives and Donald Trump runs for office again.
ELECTIONS・2 HOURS AGO
HuffPost

The U.S. Wants To Help Bolster Brazil's Democracy. It Has No Ambassador There.