Thirst for a Cause returns with drinks to aid hospitality workers 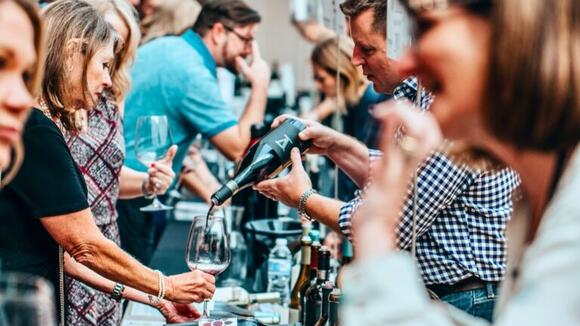 OKLAHOMA CITY ( Free Press ) — The year’s biggest event for wine, spirits, and food in OKC isn’t actually inside a bar or restaurant at all.

In 2009, Thirst Wine Merchants, one of the state’s most respected and savvy independent wholesalers of wine and craft spirits, launched the Thirst for a Cause event, featuring dozens of producers, hundreds of wines, and plenty of tasting-portioned bites from some of OKC’s very best restaurants.

Spun out of their annual, industry-only trade tasting, Thirst for a Cause took shape as a way to raise money for one fund in the Oklahoma Hospitality Foundation intended to cover medical expenses for industry workers, and to bolster the city’s wine culture at the same time.

Inviting the public to meet with producers from all over the country (sometimes the world) and to taste some of the finest wines imaginable alongside both friends and pros, the event was a massive hit, and rose quickly to the top of the mountain of annual wine events in OKC.

“Every year, it just kind of grew and grew a bit more,” said Alex Kroblin, Thirst founder and managing partner. “It’s grown very organically, and has become something that, maybe more than anything else we do, has been really gratifying.”

The event ran with annually increasing interest and success through 2019, but was unsurprisingly absent in 2020 and then cancelled in 2021 just three weeks out due to the concerning Omicron surge.

But next week, Wednesday, August 24th, finally sees the return of Thirst for a Cause as the team, led by Kroblin, prepares for the triumphant reintroduction of OKC’s favorite libation celebration.

The wine and spirits industry has changed dramatically in the now three years since the last Thirst for a Cause, not only due to the ongoing pandemic and changing consumer demographics, but also a number of devastating fires throughout the most major American wine regions. For Thirst, that means plenty of new additions to the portfolio – and to the tasting options for the event – to go with the many fan favorite selections.

Some of the most exciting new additions that attendees will be able to taste include:

Wade Cellars : Created by, and even personally overseen by, NBA superstar Dwayne Wade, the Wade Cellars offerings are head-and-shoulders above most other celebrity-owned wines, thanks in part to the mentorship and involvement of famed Napa winemaker Jayson Pahlmeyer.

Pride Mountain Vineyards : One of the most iconic wine producers from California’s Spring Mountain region, Pride will be making their Thirst for a Cause debut this year, having only been acquired by Thirst recently. Their rich, European-styled wines make for perfect autumn drinking.

Conclusion Wines : A limited-production, family-owned operation based in Napa and Sonoma, Conclusion is actually a local affair as well, being co-founded by Oklahomans Lisa and Piyush Patel. The brand has pledged proceeds from all bottles sold in 2022 to OKC’s Positive Tomorrows, an elementary school for city children facing homelessness.

Barrell Craft Spirits : One of the most exciting and anticipated changes to this year’s event is the inclusion of a wide range of spirits, and arguably no producer has connoisseurs salivating like Barrell. The incomparable limited-edition bourbon blenders have gathered countless awards and “best ofs,” and word on the street is that they may be bringing some of their most acclaimed blends for event patrons this year.

WanderFolk Spirits : Oklahoma’s own rising star spirits producer, Guthrie’s WanderFolk is another recent addition to the Thirst portfolio making their Thirst for a Cause debut. They’ll be bringing selections from their inimitable line of offerings that includes the fantastic Same Old Moses bourbon and its many barrel-finished expressions as well as the Garden Club line of floral, citrusy gins.

The first inklings of Thirst for a Cause came as something of a lark in the build up to the 2009 installment of Thirst Day, the wholesaler’s annual industry-only profile tasting when Kroblin was told of one respected restaurant worker’s worryingly mounting medical bills.

“I said ‘hey, I’ve got an idea,’” Kroblin explained. “’What if we threw together a fundraiser? I’ve already got twenty-five wineries, I’ve got the room rented, I’ve got the tables, glassware, the winemakers themselves are going to be there.’ We just had to get people to buy tickets.”

With the success of that first year, the event has continued to support funding for medical and emergency care within the state’s hospitality industry through their partnership with the Oklahoma Hospitality Foundation. As the “philanthropic arm” of the OK Restaurant Association, the Foundation seeks to fund culinary education, outreach, and financial assistance for industry workers statewide.

Over the years, the Thirst for a Cause event has raised well over $200,000 for the Foundation.

Thirst for a Cause 2022 is set for Wednesday, August 24th. Tickets are on sale now at thirstforacause.com, along with a full list of participating producers and restaurants.

The post Thirst for a Cause returns with drinks to aid hospitality workers appeared first on Oklahoma City Free Press .

Movies and musicals for a monstrous Halloween season in OKC

There can be no half measures in Oklahoma’s Nov. 8 election

Here’s why recreational marijuana isn’t on the November ballot

Corporate welfare as a governing strategy is Stitt’s way

Police are investigating what they believe to be two different homicides, one on the north side and the other on the south side. The post Police investigating two latest homicides in City of OKC appeared first on Oklahoma City Free Press.
OKLAHOMA CITY, OK・14 DAYS AGO