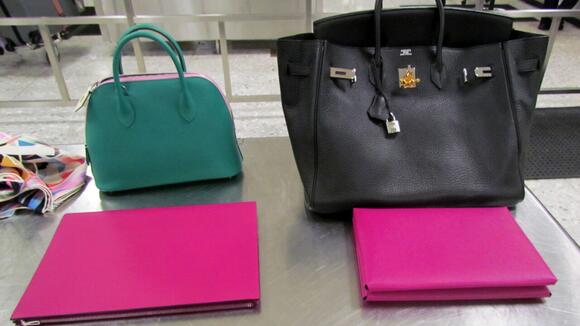 STERLING, Va. — When traveling back to the U.S. from another country, you are required to report all items you bought while visiting.

After an expensive trip to France, a couple from Maryland brought back nearly $100,000 in designer items including Chanel purses. The two were Global Entry trusted travel members. According to the Customs and Border Protection website, they are allowed quicker clearance upon arriving in the United States.

When the Maryland couple reached customs, they checked in at a kiosk but were eventually questioned by a CBP officer. That officer asked them about their purchases overseas. The couple originally said nothing, but a second officer asked about their Chanel bag. The couple then told the officers they made purchases between $300 and $900.

CBP officers eventually found 41 more new designer items. Eventually, the couple shared their receipts showing they spent a total of $96,871 on their items. To keep those purchases, the couple had to pay another $27,289 in fees and penalties.

CBP is in the process of taking away their Global Entry memberships.

Rich and entitled!! These people know the best how to play the system. They have $100k to drop on accessories but do not want to pay tax. The purses should be confiscated and they should pay $27k penalties for federal crime.

I was reminded to be kind...... ok..... this couple are lying about what they bought ... and had a hundred thousand to drop on designer things ..... what else have they lied about to be able to afford those designer things ? hmmm

Florida police have hailed a pair of six-year-old twin girls as “little heroes” after they protected their mother from an attacker with toys and a hair dryer.Officials say that suspect Andrew Williams attacked their mother after she asked him to leave her apartment in Melbourne, Florida.The Melbourne Police Department said the youngsters helped fend off the suspect, using the toys, sticks, and the hair dryer to push him back.Because of their actions, the mother was able to get inside the bathroom, but when she called for her daughters to join her they remained outside to protect her.Officers say that the 33-year-old suspect was fended off and fled the apartment and was eventually taken into custody.“They protected their mom,” neighbour Carrie Jacobs told News 6. “It’s a good thing they did that because their mom is still here today.”Officers say that when they arrested Williams he was allegedly in possession of drugs and was charged with assault and marijuana possession.He has been released on bond but was ordered by a judge to wear a GPS monitor and is due back in court on 7 October.
PUBLIC SAFETY・7 DAYS AGO
AccuWeather

The strengthening storm is on course to move toward the west coast of Florida as it travels from the Caribbean - a rare, but not unheard of, path. We look back at six of the biggest hurricanes to hit the Gulf Coast of Florida. AccuWeather meteorologists are warning of the...
FLORIDA STATE・1 DAY AGO