Kathy Hochul’s abuse of power is a NY state ‘emergency’ 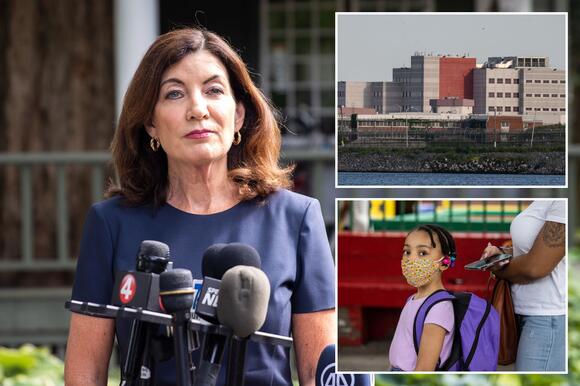 On Monday, with zero fanfare, the governor renewed her pandemic emergency declaration for 30 more days, through Sept. 12, even though the Omicron wave that initially inspired the order was largely over by March.

Because it focused on technical rules for state purchasing rather than mask mandates or business closures, the decision made few waves with the public . But declaring emergencies that don’t exist is a dangerous abuse of gubernatorial power — and it’s sadly becoming a pattern.

In recent weeks, Hochul has quietly extended three other emergency declarations that originated in 2021. One focuses on shortages of hospital and nursing-home staff, another on deteriorating conditions at Rikers Island . The oldest, addressing gun violence, was first issued by ex-Gov. Andrew Cuomo more than a year ago, shortly before he resigned to avoid impeachment.

The underlying issues are legitimate enough — but they’re persistent problems in need of permanent solutions, not short-term crises to be fixed on the fly.

So why would Hochul pretend otherwise? The real pathogen at work here is Albany-itis, which has been endemic at the state capital for generations. It gives politicians an uncontrollable urge to cut procedural corners, evade accountability and subvert ethical guardrails .

Consider the details of the order renewed on Monday. Its most important provisions suspended enforcement of certain state purchasing laws. This allowed the Hochul administration to buy pandemic-related supplies without the usual precautions, such as getting soliciting bids from multiple suppliers or submitting contracts for vetting by the Comptroller’s Office.

Dispensing with this red tape was necessary, Hochul has argued, so the state could quickly acquire millions of home testing kits to be distributed as New York City public schools reopened last January after the holidays.

As it happened, the state bought the bulk of these supplies — at a cost of $637 million — from a New Jersey company controlled by major donors to the state Democratic Party , which is supporting Hochul’s re-election, a connection first reported by the Albany Times Union. Most of those payments flowed to the company in late February and March, after COVID numbers had returned to their pre-Omicron levels.

By that time, the administration presumably would have had the time to jump through the usual hoops, such as competitive bidding and comptroller review. Instead, Hochul continued sidestepping those procedures by reupping her emergency order every 30 days.

Hochul’s office insists there was no connection between the state Department of Health’s choice of supplier and the $300,000 in political contributions made by the company’s owners and their family members. Those denials ring hollow when the governor was going out of her way to suspend purchasing rules meant to prevent waste and corruption.

These abuses would not have been possible without the complicity of the Legislature. The Assembly and the Senate have the power, by a simple majority vote, to overrule provisions of a governor’s emergency declaration after the first 30 days. They could also change any laws that are legitimately interfering in the state’s effective response to ongoing problems — including prolonged pandemics, health-care staffing shortages and gun crime .

Instead, legislators have mostly sat by as first Cuomo and now Hochul pushed the envelope of their emergency authority to new extremes — infringing on the Legislature’s proper role in state government.

Thus the governor’s emergency authority — a vital tool in a genuine crisis — is at risk of devolving into yet another Albany maneuver, to be wielded for political advantage rather than the public good.

To head that off, it might be necessary to put new limits on the governor’s authority — requiring, for example, that emergency declarations receive affirmative approval from the Legislature in order to continue past the first 30 days.

Ultimately, though, governors need latitude to respond forcefully and speedily in bona fide emergencies. Do they use that extraordinary power only when strictly necessary? Or do they abuse it as a way of grandstanding or doing political favors? Voters should watch and judge accordingly.

Bill Hammond is the senior fellow for health policy at the Empire Center.

There are no Checks and Balances any more!! All those ELECTED Officials, who we voted for because we felt they would be the best person to keep our best interest at hand have now egregiously disregarded all representation for the tax payers who are paying their salaries!!!

She’s so worried about politics and not about what’s really going on with the high crime…. She needs to go for sure

This article concentrated on the purchasing order. Mentions nothing about the CRITICAL staffing shortages in the health care industry. No media outlet has even covered this at all.