7 law enforcement officers were shot in 3 weeks in N.C. 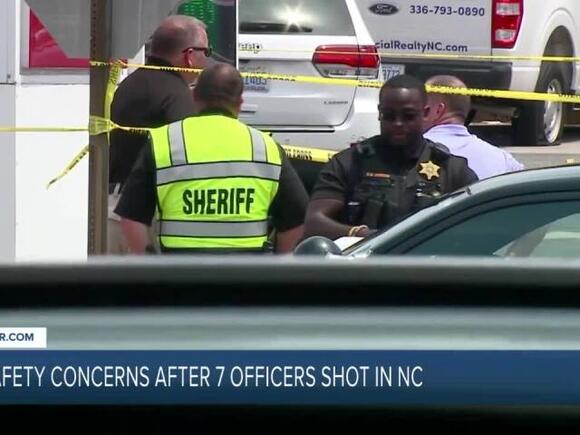 GATES COUNTY, N.C. - "The violence being levied against law enforcement. It’s almost like we’re being targeted."

Sheriff Ray Campbell with the Gates County Sheriff’s Office spoke to News 3 about the recent surge in gun violence against law enforcement officers in North Carolina.

"The time and effort we put in protecting, to have somebody turn a gun on us is pretty sad," Campbell said.

Seven law enforcement officers have been shot in the last three weeks. That’s according to the North Carolina Sheriff’s Association.

Just last week in Raleigh, a deputy was shot and killed. Wake County Sheriff’s Office says it happened on a dark road. Two weeks ago, an officer was shot in Clemmons, North Carolina. The officer is in stable condition and the suspect is dead. In Greensboro, a suspect shot an officer who was attempting to serve a search warrant.

"I have an aging fleet of patrol cars. They are wearing out."

Campbell says his agency is in need of three new patrol cars, but funding for them has not approved by county officials.

"When I approached our county manager to voice my concerns with what has just happened. The losing of a vehicle, he actually turned his back at me and wouldn’t listen to what I had to say. That’s what kind of support I have here. Quite frankly, I’m tired of it," Campbell said.

The operational impact is on the verge of getting worse, he added.

"Next year this time, I don’t know. I can’t tell you, yes we’re going to have a full fleet of vehicles if we don’t start replacing vehicles. I have two openings for deputies. If I were to hire two more, I don’t have a vehicle to issue them," Campbell said.

Citizens voiced their concerns at a county Board of Commissioner’s meeting Wednesday evening.

"If we got money to spend $200,000 on worthless land, why don’t we have enough money to get the sheriff some cars?" one Gates County resident asked.

News 3 reached out to eight northeast North Carolina Sheriff's if they concur with Sheriff Campbell's assessment and seeking reaction to the surge in shootings of deputies across the state. Perquimans County Sheriff Shelby White told News 3, "To an extent, yes I do, as to the funding," and added that "the surge in attacks is unfortunate and prayers are with those involved and praying safety for all law enforcement."

The governor emptied the prisons, the liberal cities have turned into gang sactuaries, the liberal prosecutors have no cash bail and practice catch and release and the radical left local news agencies promote resist and law enforcement hate.

thanks to ole dem. governor Cooper,for letting the criminals do as they please,let's see if he marches with the criminals,they have a voice too. 😂

Virginia National Guard mobilized to help during and after Ian

Man arrested in connection to deadly shooting in Elizabeth City

On Friday, 29-year-old Derontre Rashad Bell was arrested for the deadly shooting. Bell was processed and taken to Albemarle District Jail with no bond, police say.
ELIZABETH CITY, NC・1 DAY AGO
WTKR News 3

A criminal charge filed earlier this year against the same Virginia soldier who infamously took an armored military vehicle on a joyride through central Virginia has been dismissed.
RICHMOND, VA・2 DAYS AGO

New Va. law means parents must be alerted to sexually-explicit content at school

The policy reads that all schools must ensure parents have advanced notice if schools intend to use any sexually-explicit material.
VIRGINIA STATE・12 HOURS AGO
WTKR News 3

"The show must go on," said Rev. Andrew Buchanan, as he prepared to marry two couples one day after high winds from a remnant of Hurricane Ian tore off the steeple at Galilee Episcopal Church.
VIRGINIA BEACH, VA・18 HOURS AGO
WTKR News 3

CBS 6 Gives is partnering with our company’s charitable organization, the Scripps Howard Fund, to organize monetary donations for the people affected by the storm.
FLORIDA STATE・12 HOURS AGO
WTKR News 3

Resources are slow to arrive in communities impacted by Hurricane Ian, and people are having to sleep overnight at the gas station to fill up their cars and tanks of gas for their generators.
FLORIDA STATE・12 HOURS AGO

The effects of Hurricane Ian are being felt in Virginia Beach. An emergency call went out, in mid-afternoon, at the Cavalier Beach Club off Atlantic Avenue.
VIRGINIA BEACH, VA・1 DAY AGO
WTKR News 3

Concerns over potential storm impacts may have shut down the Neptune Festival's Boardwalk Weekend, but organizers say the annual competition showcasing the best in sand sculpting is still on.
VIRGINIA BEACH, VA・2 DAYS AGO
WTKR News 3

Death toll estimates immediately after a disaster can be unreliable as recovery scenarios are often very fluid and search and rescue operations have just begun.
FLORIDA STATE・2 DAYS AGO
WTKR News 3

Shoppers encouraged to report price gouging during state of emergency

All eyes are on Hurricane Ian, but there's one thing that shoppers to keep in mind when they're stocking up on essential items: price gouging.
VIRGINIA STATE・1 DAY AGO

Emergency managers in Virginia Beach have been watching Hurricane Ian closely. Forecasts indicate that coastal Virginia will see some of that severe weather.
VIRGINIA BEACH, VA・2 DAYS AGO
WTKR News 3

Norfolk police are investigating a shooting that left a 15-year-old injured on the 700 bock of B Avenue Wednesday night.
NORFOLK, VA・2 DAYS AGO
WTKR News 3

North Carolina Governor Cooper has issued a State of Emergency ahead of Hurricane Ian remnants moving through the state.
ENVIRONMENT・3 DAYS AGO
WTKR News 3

The remnants of Ian packed a punch in Portsmouth Friday. The heavy rain and extreme winds did not let up for much of the day. The Elizabeth River looked more like an ocean.
PORTSMOUTH, VA・1 DAY AGO

Florida working with SpaceX to improve connectivity after Hurricane Ian

Florida is working to improve connectivity across the state after Hurricane Ian left a trail of devastation.
FLORIDA STATE・12 HOURS AGO
WTKR News 3

The last man wanted in connection to a triple shooting at the Oceanfront has now been arrested. On Wednesday, Chesapeake Police arrested 30-year-old David Evans, of Norfolk.
VIRGINIA BEACH, VA・3 DAYS AGO
WTKR News 3

Richmond restaurant owner claims she was evicted with no warning

The owner of Irie Vibes came back from a weekend off only to find the locks on her restaurant had been changed and noticed was placed on the door.
SHORT PUMP, VA・2 DAYS AGO