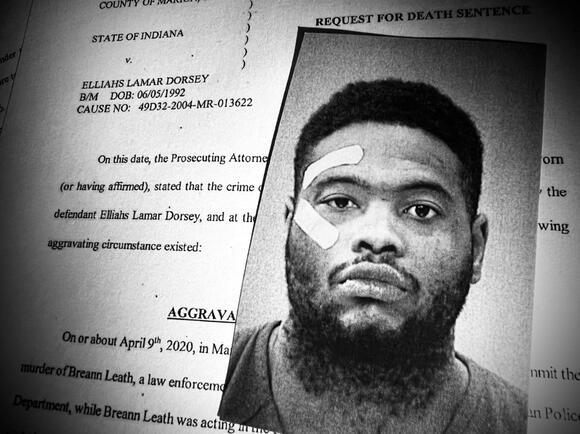 Over the last 10 years in Indiana, 11 law enforcement officers were shot and killed in the line duty.

Six of those cases resulted in death penalty being sought, but so far none has resulted in a capital conviction.

Gunshots fired into a hallway of an apartment building on Indy’s east side in April 2020 claimed the life of IMPD officer Breann Leath.

That case is still pending, as is the newly filed death penalty case against Carl Boards II for the murder of Elwood officer Noah Shahnavez.

“You can have all kinds of opinions, but until the stark reality of a defendant facing capital punishment is dumped in your lap, you have no idea how it feels,” said attorney Ralph Staples.

As a former prosecutor, attorney Ralph Staples was involved in seven death penalty cases, which he says are always expensive to pursue.

“You’ve got to move a lot of money to finance a capital murder prosecution,” said Staples.

“Even as a prosecutor it affects you personally and professionally,” said Staples.  “It’s one of those things that only experience helps you learn.”

The last execution carried out for any criminal case in the state of Indiana took place back in December 2009.

There is absolutely no doubt that this dude is guilty. Why does it take all that money and all those years to get the job done? That is one of the things that have destroyed the so-called criminal justice system in this country.

no it's not the right thing to do why let them live? if you meet someone to tie the rope be glad to do it the price nothing

CINCINNATI – An Indiana mother who abandoned her nonverbal son in Ohio learned her sentence Wednesday. A judge ordered Heather Adkins to spend six months at the River City Correctional Facility for parenting classes and mental health and addiction treatment, according to WKRC. Adkins pleaded guilty to child endangerment as part of a plea agreement. […]
OHIO STATE・7 DAYS AGO
FOX59

Court records show the suspect has a history of violence and threats against the victim for more than a year before the murder.
INDIANAPOLIS, IN・8 DAYS AGO
FOX59

‘You solved it!’: Anderson man accused of stabbing his mother to death

ANDERSON, Ind. — Discovered among a grisly crime scene was a petition requesting an Anderson mother’s 28-year-old son be committed to a group home. He suffered from paranoia and hallucinations, the mother wrote, and was a danger to himself and others. The petition, dated Sept. 13, was found nearly two weeks later on a table […]
ANDERSON, IN・8 DAYS AGO
FOX59

Grant County man gets 75 years for murder; tried to claim victim was intruder

GRANT COUNTY, Ind. — A Grant County was sentenced to 75 years in prison after he shot and killed a man in 2020 and tried to claim the victim was an intruder. Matthew Whitt was found guilty in August. According to previous reports, Whitt called 911 in February 2020 to tell police he had shot […]
GRANT COUNTY, IN・9 DAYS AGO

Court docs: Daycare shooting suspect was going to make it a ‘murder suicide’

An Indianapolis man facing charges after a deadly shooting that left a mother dead after dropping off her kids at daycare had planned to kill her, court documents detail.
INDIANAPOLIS, IN・9 DAYS AGO
FOX59

A man who pleaded guilty in 2018 to his role in the death of a pastor’s wife during a robbery spree is now learning his sentence.
INDIANAPOLIS, IN・9 DAYS AGO
FOX59

ANDERSON, Ind. — The Anderson Police Department is now investigating a homicide after a woman was found dead Monday afternoon. Just before 4 p.m., officers were called to a home in the 1600 block of Meridian Street in reference to an unknown disturbance. Once on scene, the caller led officers to the location of her […]
ANDERSON, IN・9 DAYS AGO
FOX59

An Indianapolis man faces charges after police say he lead officers on a chase in a stolen U-Haul box truck.
INDIANAPOLIS, IN・9 DAYS AGO
FOX59

Nyron Harmon pleaded guilty to possession with the intent to distribute fentanyl and carrying a firearm during and in relation to a drug trafficking crime.
INDIANAPOLIS, IN・8 DAYS AGO
FOX59

Indianapolis likely to be missing from FBI 2021 crime stats report

INDIANAPOLIS — Each year at the end of September, the FBI issues a report on America’s crime statistics from the year before. Indianapolis is likely to be missing again from the annual report and there’s no guarantee Indiana’s numbers will be accurately reported. “You want to know how many aggravated assaults, murders and stuff that […]
INDIANAPOLIS, IN・10 DAYS AGO
FOX59

HAMILTON COUNTY, Ind. — A driver was ejected in a multi-vehicle crash in Hamilton County Tuesday. Around 3:42 p.m., the Hamilton County Sheriff’s Office responded to a serious accident involving three vehicles on S.R. 19 between Field Dr. and 196th St. Based on preliminary evidence on scene and witness statements, police believe a Mitsubishi Eclipse […]
HAMILTON COUNTY, IN・8 DAYS AGO

GREENWOOD, Ind. — Police in Greenwood are asking for the public’s help identifying a man accused of trying to deposit fake checks in Johnson and Marion counties. Greenwood police say the unidentified man attempted to deposit a $4500 check and withdrawal a check worth $5,500. The man even had the correct social security number for […]
GREENWOOD, IN・10 DAYS AGO
FOX59

DELPHI, Ind. — Despite the circulation of rumors online, Indiana State Police have not confirmed any arrests in relation to the Delphi murders and say there is “nothing imminent”.  It has been more than 5 years since 13-year-old Abby Williams and 14-year-old Libby German were killed on Feb. 13, 2017, after going for a walk […]
DELPHI, IN・11 DAYS AGO
FOX59

LAFAYETTE, Ind. – A statewide Silver Alert has been declared for a missing 16-year-old teen from Lafayette. According to Indiana State Police, Jadea Nour is a black female who is 5’7″ and weighs 135 pounds. She has brown hair and hazel eyes and was last seen wearing a white sherpa sweatshirt, blue jeans and white […]
LAFAYETTE, IN・8 DAYS AGO
FOX59

‘She has gone home now for the final time’: Hear the 10-42 End of Watch for Officer Seara Burton

RICHMOND, Ind. — It is one of the most emotional parts of saying farewell to a fallen police officer. The procession carrying Officer Seara Burton to Indianapolis stopped in front of the Richmond Police Department Monday afternoon for her 10-42 End of Watch call. It marks the final time an officer is called out of […]
RICHMOND, IN・9 DAYS AGO
FOX59

Gunshot detection systems listening to Indy’s near east side

IMPD has identified a five-square-mile area not far from the intersection of East 10th Street and North Rural Street as the site for a test of three gunshot detection systems intended to give police and first responders an audio record of where gunfire is breaking out.
INDIANAPOLIS, IN・8 DAYS AGO
FOX59

ZIONSVILLE, Ind. — A man was arrested for drunk driving and leaving the scene of a crash Saturday afternoon after his truck flipped off of a Zionsville road, injuring two of his passengers. The Boone County Sheriff’s Office was called around 8 p.m. to the intersection of County Road 300 S. and County Road 21 […]
ZIONSVILLE, IN・10 DAYS AGO
FOX59

INDIANAPOLIS – Two men were arrested early Monday after police pursuit, crash, and standoff on Indy’s north side, according to police. Police said they were called to the 100 block of West Fall Creek Parkway just before 1 a.m. for a possible catalytic converter theft. Officers arrived to the scene quickly, and found the a […]
INDIANAPOLIS, IN・10 DAYS AGO
FOX59

DELAWARE COUNTY, Ind. — This week, the Bureau of Alcohol, Tobacco, Firearms and Explosives (ATF) is conducting training at the Delaware County Sheriff’s Office (DCSO) for first responders to learn about homemade explosives. The training is part education in the classroom and in the field, where participants are learning about methods of investigating an explosion […]
DELAWARE COUNTY, IN・8 DAYS AGO