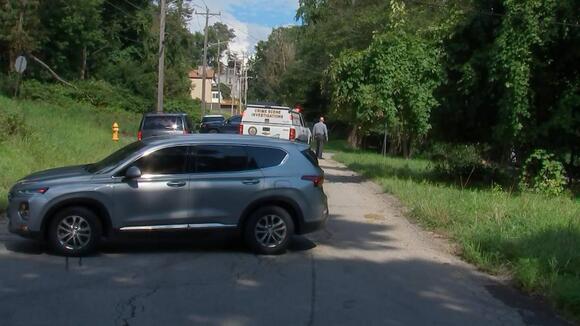 ALLEGHENY COUNTY, Pa. — A man was sent to a hospital after a shooting in the Penn Hills area.

Police responded to reports of a shooting at the 1600 block of Brushton Avenue in Penn Hills.

A man who was shot in the arm and foot was found nearby and was taken to the hospital.

Officers said the shooting occurred throughout several blocks in the city of Pittsburgh and Penn Hills.

The victim is expected to survive.

Anyone with information is asked to contact Allegheny County Police.

This is a developing story. Check back for updates as more information becomes available.

PENN HILLS, Pa. — A car is seen dangling in photos shared by the Penn Hills No. 7 Volunteer Fire Company after a garage floor collapsed at a home. Firefighters and the Penn Hills Police Department responded to the 300 block of Bon Air Road on Sunday. According to...
PENN HILLS, PA・23 HOURS AGO
WPXI Pittsburgh

PITTSBURGH — Two juveniles were taken to a hospital after a shooting in Pittsburgh’s Sheraden neighborhood. City officials said they are investigating the 500 block of Sherwood Avenue. Allegheny County dispatchers said emergency crews were called to the scene at around 8:45 p.m. When police arrived, they found...
PITTSBURGH, PA・1 DAY AGO
WPXI Pittsburgh

3 wounded in shooting at amusement park near Pittsburgh

WEST MIFFLIN, Pa. — Don Orkosey was at Kennywood on Saturday night when he witnessed the shooting. He said one teen bumped into another teen by mistake, a punch was thrown, and gunshots followed. “I saw the boy who was on the ground with blood running down the sidewalk,...
WEST MIFFLIN, PA・11 HOURS AGO

PITTSBURGH — A man was killed and another was injured in a shooting in Pittsburgh’s Hill District neighborhood. Allegheny County 911 told Channel 11 that police and EMS units were called to the 1800 block of Bedford Avenue just after 1 p.m. Officials at the scene said one...
PITTSBURGH, PA・2 DAYS AGO
WPXI Pittsburgh

PITTSBURGH — Summer violence on Pittsburgh’s South Side is spilling into the fall. “It’s really frustrating and it makes me feel not as safe being around here, like our peace was disrupted in the neighborhood,” said Kari Exler, who woke up Monday morning to push alerts and notifications about gunfire on her block overnight.
PITTSBURGH, PA・1 DAY AGO
WPXI Pittsburgh

WILDWOOD, N.J. — A Pittsburgh man has been charged with killing two people and injuring a third during a pop-up car rally in Wildwood, New Jersey, over the weekend. Gerald White, 37, was arrested in connection with a Saturday night crash in which his 2003 Infiniti was at a “standing stop” before it took off and hit at least one vehicle and pedestrians, NBC 10 in Philadelphia reported.
WILDWOOD, NJ・1 DAY AGO
WPXI Pittsburgh

PITTSBURGH — An arrest warrant has been issued for a woman accused of hitting and killing a 6-year-old child with her car in Pittsburgh’s Glen Hazel neighborhood in July. According to Pittsburgh police, Rhonda Wood, 63, faces charges of homicide by vehicle, involuntary manslaughter, careless driving involving death, and a stop sign violation.
PITTSBURGH, PA・12 HOURS AGO
WPXI Pittsburgh

MCKEES ROCKS, Pa. — A man whom police called a “serial robber” was arrested in McKees Rocks Friday. According to McKees Rocks police, Robert Populo was wanted in four different violent robberies in the McKees Rocks area. Police said the victims ranged in age from 18 to...
MCKEES ROCKS, PA・2 DAYS AGO

WHITE TOWNSHIP, Pa. — Pennsylvania State Police are looking for a motorcycle that was stolen out of an Indiana County apartment complex parking lot on Thursday. According to officials, the motorcycle was reported stolen between 7:20 a.m. and 7:40 a.m. from Westgate Terrace Apartments in White Township. The motorcycle...
INDIANA COUNTY, PA・2 DAYS AGO
WPXI Pittsburgh

WEST MIFFLIN, Pa. — One local mom said she was at Kennywood Park for a birthday party on Saturday with a group of kids ranging in age from six to 13. She began noticing red flags even before they made it through the gates. “After the third fight, we...
WEST MIFFLIN, PA・13 HOURS AGO
WPXI Pittsburgh

PITTSBURGH — Back in July, Channel 11 news anchor Susan Koeppen was waiting to turn left at busy Penn Avenue and South Dallas in Pittsburgh’s Point Breeze. “As his car drifted by me, I said, ‘I’m going to watch this guy because he doesn’t look right.’ I watched him, he drifted right by me, and jumped the curb and crashed right here into the fence,” Koeppen said.
PITTSBURGH, PA・16 HOURS AGO
WPXI Pittsburgh

Man in critical condition after being shot multiple times in McKeesport

MCKEESPORT, Pa. — A man is in critical condition after he was shot multiple times in McKeesport overnight. According to Allegheny County police, the shooting happened just before 3 a.m. in the 1100 block of Walnut Street. First responders found an adult male who had been shot multiple times,...
MCKEESPORT, PA・2 DAYS AGO

HEMPFIELD TOWNSHIP, Pa. — One person was flown to a hospital after a fiery crash involving multiple cars in Hempfield Township. According to our news partners at the Trib, first responders from four different fire companies assisted with the crash. The crash happened on Arona Road near the intersection...
WESTMORELAND COUNTY, PA・2 DAYS AGO
WPXI Pittsburgh

UNIONTOWN, Pa. — The coroner was called to a crash in Fayette County. 911 dispatchers said police, firefighters and medics were called to Pittsburgh Street in Uniontown at around 4:26 p.m. A vehicle appeared to have struck a traffic light and suffered heavy damage to its front. Two tires...
UNIONTOWN, PA・2 DAYS AGO
WPXI Pittsburgh

FAYETTE COUNTY, Pa. — The former Fayette County Association for the Blind executive director is facing nearly 500 charges after police say he stole funds from the nonprofit. According to a criminal complaint, the Board of Directors at the nonprofit contacted Uniontown City police and requested a meeting with Chief Jason Cox on July 30, 2021.
FAYETTE COUNTY, PA・11 HOURS AGO
WPXI Pittsburgh

‘Everyone started running’: Witnesses recount the moment shots rang out at Kennywood Park

WEST MIFFLIN, Pa. — As shots rang out during the first night of Phantom Fall Fest at Kennywood Park, people inside the park scrambled to get out, jumping fences, with the scene described as chaotic. Those were terrifying moments for Stacy Tillman, who was at Kennywood Park for the...
WEST MIFFLIN, PA・1 DAY AGO