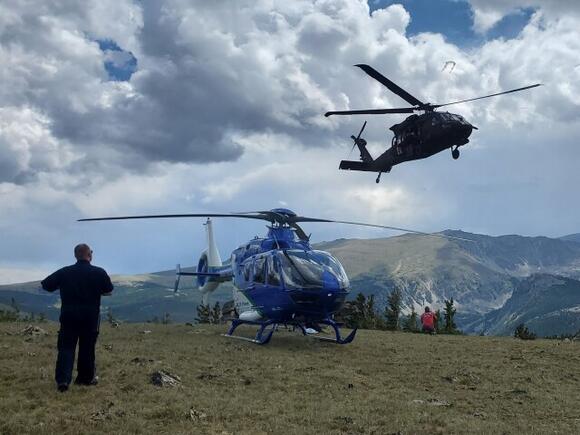 Red Lodge Search and Rescue rescued an injured paraglider on the western slope of Crow Mountain in the East Rosebud drainage on Monday.

Red Lodge Fire Rescue wrote on social media Tuesday that the paraglider and his partner were launching from 9,700-foot peak using speed wing when he crashed into a rocky chute about 500 feet below the summit.

The man had life-threatening injuries and managed to call for help on his cell phone before the battery died, according to Red Lodge Fire.

Rescuers found the man with the help of his flying partner, who had already landed in the East Rosebud valley. Search and Rescue members were ferried to a plateau near the summit by private helicopter, then stabilized the injured paraglider for transport.

The Montana Army National Guard performed a short-haul helicopter from the chute and transport the man to the plateau, where a Help Flight helicopter transported him to a medical facility, according to Red Lodge Fire.

“Based on the extent and nature of the injuries, time was of the essence in this situation. Because we had great partners and responders, everything came together just like it needed to for this person, “ said Brad Hauge, Red Lodge Fire Rescue paramedic and medical lead on the rescue team. “We hope he has a speedy recovery.”

Red Lodge Fire credited the National Guard, Red Lodge Search and Rescue, Help Flight, Palisade Ranch, the Beartooth Ranger District that approved the landing of helicopters in the wilderness, the Carbon County Sheriff's office, and Hope Ranch, which was on standby for a horse rescue.