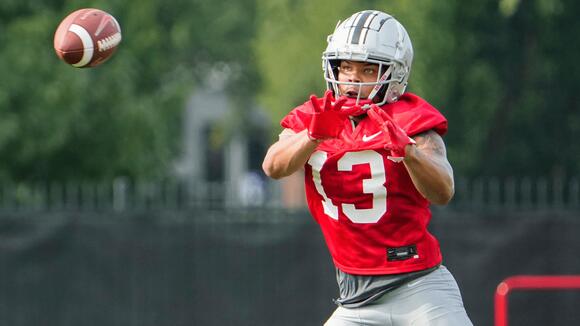 Brown becomes the fifth member of the Buckeyes' 2022 recruiting class to shed his stripe.

A former four-star prospect from Chicago St. Rita, Brown was one of four wide receivers to sign with the Buckeyes last cycle, joining Kyion Grayes , Caleb Burton and Kojo Antwi . He was the highest-rated player of the four, coming in as the 13th-best wide receiver and No. 79 prospect overall in the class.

While Grayes and Burton enrolled early and participated in spring practices, Brown and Antwi only arrived on campus in June. The fact that he was first among them to shed his stripe only speaks to his performance through the first 12 practices of fall camp.

Whether or not that translates to early playing time in a loaded wide receivers room remains to be seen, but it’s worth noting Brown has been one of the players returning punts in the portions of practice open to the media, meaning he could have an early role on special teams.

Tight end Zak Herbstreit also shed his on Wednesday, but this marks his second season with the team after walking on last summer. Together, they bring the total number of black stripe removals this year to eight, as Oklahoma State transfer safety Tanner McCalister , freshman safety Kye Stokes and freshman defensive end Caden Curry lost theirs during spring practice.

"We just try to help each other the best we can and help the team win."
COLUMBUS, OH・12 HOURS AGO
BuckeyesNow

The Buckeyes wrap up a five-game homestand to open the season against the Scarlet Knights.
COLUMBUS, OH・4 HOURS AGO
BuckeyesNow

"I didn’t really have any expectations but to just fly around and do my job."
COLUMBUS, OH・2 HOURS AGO
BuckeyesNow

Half of the Big Ten's punters are a product of Prokick Australia, a program that helps develop college football players.
COLUMBUS, OH・1 HOUR AGO

"I know he’s frustrated, but we’re not as far away as we think."
COLUMBUS, OH・1 DAY AGO
BuckeyesNow

The Buckeyes have won all eight games against the Scarlet Knights since they joined the Big Ten.
COLUMBUS, OH・1 DAY AGO
BuckeyesNow

Lewis was the second USC transfer in as many years to have an eligibility issue upon his arrival.
COLUMBUS, OH・1 DAY AGO
BuckeyesNow

"That’s a great job on his part on being mentally tough to handle that situation.”
COLUMBUS, OH・1 DAY AGO

Here's the latest from the Woody Hayes Athletic Center in Columbus.
COLUMBUS, OH・1 DAY AGO
BuckeyesNow

Eichenberg recorded a team-high 14 tackles, including seven solo stops and two tackles for loss, in the win over Wisconsin.
COLUMBUS, OH・2 DAYS AGO
BuckeyesNow

Ohio State’s Oct. 8 Game At Michigan State To Kick Off At 4 P.M. On ABC

The Buckeyes have won six straight games against the Spartans, as well as the last eight meetings in East Lansing.
COLUMBUS, OH・2 DAYS AGO
BuckeyesNow

Buckeye Breakdown Podcast: What We Learned From Ohio State's Dominant Win Over Wisconsin

Here are our biggest takeaways from the Buckeyes huge win against the Badgers from Saturday night's big football game.
COLUMBUS, OH・2 DAYS AGO