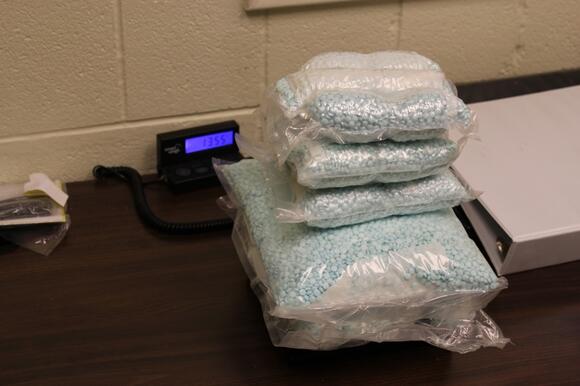 Shortly before 9 p.m. on Aug. 15, a deputy with the Canadian County Sheriff’s Office stopped a Toyota Camry on I-40 near Evans Rd. following an improper lane change.

Authorities say the driver was also traveling approximately 20 miles per hour below the speed limit. As a result, the deputy pulled the car over.

The deputy learned the driver was traveling in a rental vehicle from Phoenix to St. Louis with 29-year-old Demaury Mosea Haywood.

Officials say the deputy became suspicious after the driver and Haywood gave conflicting information about their trip.

The driver gave the deputy consent to search the vehicle, but Haywood denied consent.

At that point, the El Reno Police Department arrived at the scene with a K9 drug detector dog. The K9 signaled that drugs were present in the car.

“That seems like quite a bit of fentanyl, especially to be taken off our streets,” said Kristie Edelen, with the Oklahoma Center for Poison and Drug Information.

“Anywhere from 20 to 30 overdoses per week,” said the ER doctor.

That’s because people don’t know what they’re buying on the streets.

“People that are often trying to buy drugs, such as cocaine or heroin, typically the drugs are laced with fentanyl,” said Dr. Woolum.

Deputies also found a large stack of U.S. currency in the glove box.

“This is a very big seizure of fentanyl and I’m extremely pleased with my deputies’ vigilance in making sure we kept these drugs from making it to the streets. I’m also very appreciative of the professional assistance we were provided by the El Reno Police Department, and their drug detector dog,” said Chris West, Canadian County Sheriff.

When the driver and passenger were arrested, Haywood claimed possession of the drugs and said the driver was unaware that he had drugs in his bags.

Haywood was taken into custody and the driver was later released with the vehicle.

Officials say Haywood admitted that he had traveled to Arizona with the intent to purchase the fentanyl pills.

“I just want people to be aware this is a public health crisis,” said Dr. Woolum. “It’s all across the United States, it’s not unique to Oklahoma.”

He was arrested on a complaint of trafficking fentanyl.

Glad they got these death pills off the road. Disappointing how many of these busts have been in OK lately; but with the borders wide open, not surprised.

An Oklahoma City man was arrested Thursday and charged with the murders of four people dating back almost a decade.
OKLAHOMA CITY, OK・3 HOURS AGO
KFOR

The Purcell Police Department tells KFOR a city utility customer had a dispute about whether his utilities were on or off. It then escalated into a physical confrontation with one of the city employees inside city hall.
PURCELL, OK・4 HOURS AGO
KFOR

Authorities are investigating a deadly crash that claimed the life of an Oklahoma City police officer.
OKLAHOMA CITY, OK・1 DAY AGO

A man who was convicted of killing one of his roommates has been sentenced.
OKLAHOMA CITY, OK・15 HOURS AGO
KFOR

The lives of two Oklahoma firefighters will be honored by the Oklahoma State Firefighters Association.
OKLAHOMA CITY, OK・8 HOURS AGO
KFOR

Authorities are investigating a crash that claimed the lives of two teenagers in Caddo County.
CADDO COUNTY, OK・1 DAY AGO
KFOR

As the community mourns the loss of an Oklahoma City police officer, a local organization is working to support her family.
OKLAHOMA CITY, OK・11 HOURS AGO

A devastating fire wiped out a home near East Maple and Highway 24 two weeks ago and the family lost nearly everything.
WASHINGTON, OK・3 HOURS AGO
KFOR

The Oklahoma Highway Patrol is asking for the public's help as they investigate a deadly crash involving a motorcyclist.
OKLAHOMA CITY, OK・1 DAY AGO
KFOR

Motorcyclist killed in crash with semi-truck

Officials say a motorcyclist is dead following a crash with a semi-truck on a busy Oklahoma interstate.
OKLAHOMA CITY, OK・15 HOURS AGO
KFOR

When officers arrived in the area, they were flagged down by someone who told them there had been a murder.
OKLAHOMA CITY, OK・2 DAYS AGO

The Oklahoma City Police Department is investigating a homicide after a person was found dead inside a tent at a homeless encampment on the city's southwest side Tuesday night.
OKLAHOMA CITY, OK・2 DAYS AGO
KFOR

Midwest City has voted to end its professional service contract with The Criminal Justice Advisory Council, or CJAC, the advisory council for the Oklahoma County Detention Center.
MIDWEST CITY, OK・1 DAY AGO
KFOR

In her 10 months of life, little Eris has undergone a dozen surgeries and exceeded doctors expectations.
OKLAHOMA STATE・3 HOURS AGO
KFOR

The Oklahoma County District Attorney has filed four charges, three of which are felonies, against a former Seeworth Academy director.
OKLAHOMA CITY, OK・2 DAYS AGO
KFOR

Plans for Oklahoma Turnpike expansion continue to cause concern for many people across the state.
OKLAHOMA STATE・2 DAYS AGO
KFOR

A well-known activist has been released from the very jail he often speaks out against. He now faces charges including elder abuse, neglect, and exploitation.
OKLAHOMA CITY, OK・2 DAYS AGO
KFOR

The 24th Annual AIDS Walk event begins at noon on Sunday, Oct. 2, 2022 at the Myriad Gardens, and will cap off with a one-mile walk at 2 p.m.
OKLAHOMA CITY, OK・1 DAY AGO
KFOR

Traffic: Northbound I-35 to close for resurfacing

Drivers in Oklahoma City may need to find a detour as construction crews work to resurface a busy roadway.
OKLAHOMA CITY, OK・1 DAY AGO