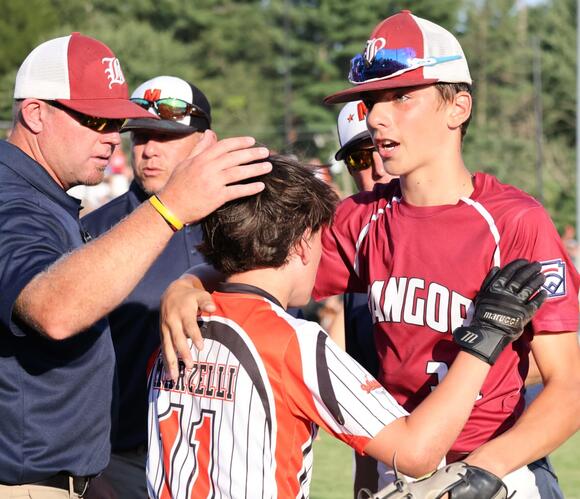 Texas-Oklahoma is as big as it gets when it comes to rivalries, but that pairing took a different turn last week in Little League baseball.

The signature event thus far in the annual race to Williamsport, Pennsylvania, involved a stunning display of sportsmanship between a team from Texas and a team from Oklahoma.

Texas pitcher Kaiden Shelton hit Oklahoma batter Isaiah Jarvis in the head, setting off immediate oohs and ahs. But the tone of those oohs and ahs changed with what Jarvis did next:

The Little League World Series starts today, and a number of states' high school football seasons start this week, including tonight in Georgia at the Corky Kell Classic , which runs through Saturday with several marquee games .

Shelton and his team from Pearland, Texas, ended up eliminating Jarvis and his squad from Tulsa, Oklahoma, and Texas will play its first game in Williamsport on Thursday against Pennsylvania.

Jarvis' trip to the mound to console his distraught opponent swept the nation last week, and here's hoping that wave of sportsmanship continues with the Little League World Series and the high school sports fall season.

By Dana Becker By the time some elite quarterbacks reach their senior season, things get put on cruise control as they prepare to make the move to the college ranks. Not West Des Moines (Iowa) Dowling’s Jaxon Smolik.  Smolik, who committed to Penn State University, has the Maroons once again ...
WEST DES MOINES, IA・2 DAYS AGO