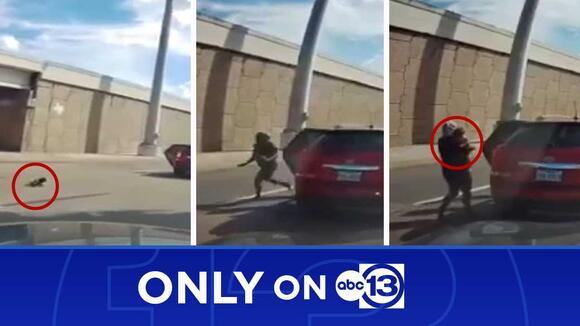 A bizarre video sent to ABC13 shows the frantic moments as a child fell out of a moving car in southwest Houston. The dashcam video was sent in on Tuesday by a witness. The sender, who did not want to be identified, said the incident happened at about 4:30 p.m. Tuesday in the 6600 block of the I-69 Southwest Freeway at Hilcroft. In the video, you can see a red SUV taking a right turn onto the feeder. That's when the small child somehow rolled out onto the street. The driver stopped to scoop up the child, who appeared to have no signs of injuries. ABC13 reached out to Houston police to see if they received any service calls at that scene, but officers said they didn't hear anything.

Submit a tip or story idea to ABC13

Have a breaking news tip or an idea for a story you think we should cover? Send it to ABC13 using the form below. If you have a video or photo to send, terms of use apply. If you don't, just hit 'skip upload' and send the details.

How about charging the parent/driver for child endangerment for putting the baby "back" into the car WITHOUT a child restraint which is how it probably fell out to begin with?? Smh

Ok I see a lot of insinuating this mother was showing a sign of neglect and did not have her child in a restraint all from people who were not in the car.. one thing I can say is she needs to have child lock on. as far as her putting the child in a restraint she could have had the child in one.. Dies anyone know that these children of today are not like the children of yesteryears my son who is now 22 years of age completely got out of his restraints locked in a car seat very smart knew how to get out both ways unlocking the car seat and maneuvering his arms and legs around the same child that knew how to climb out of his playpen so I made sure I kept the child-proof lock on so he could not open the door fast forward my oldest son 28 years of age has a child that knows how to get out of his car seat so he makes sure the child-proof lock is on the door

Both deputies are in serious, but stable condition after being ejected onto the freeway Sunday morning, according to investigators.
HARRIS COUNTY, TX・47 MINUTES AGO
ABC13 Houston

2-year-old killed after being struck by a speeding truck in SW Houston, police say

This was just one of the two incidents involving young children in the Houston area killed in a hit-and run.
HOUSTON, TX・4 HOURS AGO
ABC13 Houston

According to police, a witness told police officers the shooter arrived in another vehicle, got out, and fired two to three times before driving off.
HOUSTON, TX・23 HOURS AGO
ABC13 Houston

There is currently an investigation underway to determine how it happened.
HOUSTON, TX・17 HOURS AGO

Woman trapped between rocks near Galveston's seawall for at least an hour, police say

GALVESTON, Texas (KTRK) -- A woman was hurt when she fell and was trapped between rocks near Galveston's seawall Sunday morning, according to police. Galveston police said they responded to a call of a woman trapped upside down in the rocks at the jetty near 10th Street and Seawall. The...
GALVESTON, TX・5 HOURS AGO
ABC13 Houston

A woman who told ABC13 the fire started in her apartment said she doesn't remember how she got out and is worried about her dog possibly still being in the building.
HOUSTON, TX・1 DAY AGO
ABC13 Houston

'My bike is everything,' the single father of three told ABC13 on Friday. He says that the bike helps him relieve stress.
HARRIS COUNTY, TX・21 HOURS AGO
ABC13 Houston

Investigators said they are checking video from businesses in the area that might help get a vehicle description.
SPRING, TX・2 HOURS AGO

Authorities said they believe the group of 4 juveniles and 1 adult might have also tried to steal a Chase Bank ATM 30 minutes before to the CVS incident.
HOUSTON, TX・43 MINUTES AGO
ABC13 Houston

The victim told police that the suspect opened his car door, pointed a handgun at him, and stole his wallet and necklace.
HOUSTON, TX・1 DAY AGO
ABC13 Houston

Surveillance video obtained by ABC13 shows the accused driver of the car stop several blocks away from the crash, get out to check the front of his car, then drive off.
HOUSTON, TX・1 DAY AGO
ABC13 Houston

Person of interest wanted after bystander killed in shootout between family in NE Houston, HPD says

Investigators said two men, believed to be family members, were involved in an argument before the shootout took place.
HOUSTON, TX・1 DAY AGO

13 Unsolved: Who was waiting in the weeds to kill Worthing HS student Trellis Sykes?

Student athlete Trellis Sykes took a shortcut in 1994 that had a fatal ending. She was hit on the head, raped and murdered in a field of tall weeds.
HOUSTON, TX・1 DAY AGO
ABC13 Houston

Brandon Rashon Freeman was driving eastbound on the service road of the Katy Freeway when he ran a red light and hit Amy Lane Shypailo's vehicle, according to authorities.
HOUSTON, TX・2 DAYS AGO
ABC13 Houston

Crash investigators said that alcohol is believed to have been a contributing factor after a Cadillac slammed into another vehicle and caused it to roll in a ditch, police said.
DICKINSON, TX・20 HOURS AGO
ABC13 Houston

"When your time comes, your time comes. But it came too soon for them. Way too soon," a family friend who taught Indian classical dance to both daughters, said.
WALLER COUNTY, TX・1 DAY AGO
ABC13 Houston

All eastbound lanes are closed along the La Porte Freeway at Allen Genoa Road due to the three-vehicle crash, according to Houston TranStar.
HOUSTON, TX・1 DAY AGO
ABC13 Houston

Several employees noticed and tried stopping the robbery, but one of the suspects threatened them by stating they had a gun, police said.
HOUSTON, TX・3 DAYS AGO
ABC13 Houston

Lasers can bring down aircraft because they can disorient and temporarily blind the pilot. Last year, a man was arrested for shining a laser at planes near Hobby Airport.
HOUSTON, TX・2 DAYS AGO