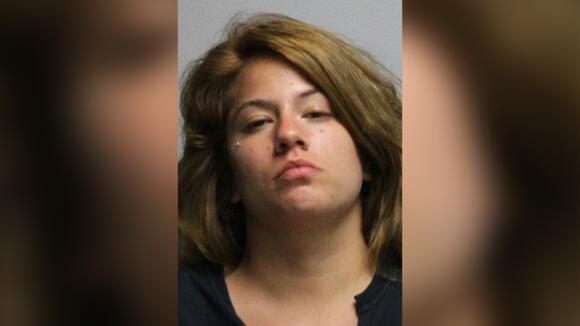 BUTLER COUNTY, Ohio (WDTN) – A woman was arrested after a child was seen drinking alcohol in a Butler County gas station.

Police arrested 26-year-old Victoria Hampton on Friday, August 5 on an endangering children charge and contributing to the unruliness/delinquency of a child charge in connection to the incident.

Video shows a 6-year-old walking around a Butler County gas station drinking a bottle of Smirnoff Ice earlier this month. According to our NBC affiliate at WLWT , the child’s mother said she allowed her son to stay with his father and grandmother for a few weeks. However, she did not know the father would allow another woman, Hampton, to care for the child.

Hampton allegedly gave the child Smirnoff Ice after buying it at the Marathon gas station in Hanover Township. Employees called 911, but when police arrived Hampton reportedly said it was a mistake and they were able to leave.

However, employees asked police to give Hampton a no trespassing order. When police arrived at her home, they found the boy on a scooter, in the middle of the road, drinking another Smirnoff Ice, according to WLWT .

Hampton was arrested and is being held in the Butler County Jail.

how do you give a child a bottle of alcohol by accident? she should have been arrested the first time they made contact with her

No way it was a mistake everyone knows Smirnoff and it's in the ALCOHOL cooler. They arrive at her house and she's given him another one?! And I had to read this twice to realize...this is not the child's mother, it's whoever the "father" let watch him 🥴. Please keep this baby safe going forward...this is not the village he needs.

This is the stepmom...article says the child's mom did not know another woman would be caring for her child at her ex's and the stepmom gave him alcohol. if I was mom I would be livid.

MARION, Ohio (WCMH) — A multi-state fraud ring involving two Ohio men has been stopped after a months-long investigation, according to the Marion County Sheriff’s Office. According to the sheriff’s office, Michael Mareno Stevens-McKenzie, 28, of Twinsburg, Ohio, and Jarell Coree Scott, 28, of Cleveland Heights, Ohio, have been charged with felony engaging in a […]
CRAWFORD COUNTY, OH・6 HOURS AGO
WTRF- 7News

The Mahoning County Dog Warden is getting a dog medical help after he was found with a bullet wound in his head.
MAHONING COUNTY, OH・12 HOURS AGO
WTRF- 7News

SPRINGFIELD, Ohio (AP) — Five firefighters were injured while battling a house fire in Ohio over the weekend, authorities said. Officials said the blaze was reported in a home in Springfield at about 2 p.m. Tuesday. Assistant Chief Matt Smith said crews were on the second floor when the fire suddenly took off — which […]
SPRINGFIELD, OH・14 HOURS AGO
WTRF- 7News

KANAWHA COUNTY, WV (WOWK)—A man indicted for allegedly leading police on a 20-mile-long high-speed chase with his baby in the backseat accepted a plea agreement in Kanawha County court on Monday. 20-year-old Dakota Taylor was indicted for strangulation, second offense domestic battery, assault on a law enforcement officer, fleeing from an officer, fleeing with reckless […]
KANAWHA COUNTY, WV・8 HOURS AGO

An inmate died at a local hospital after he was found unresponsive in his cell. KDKA reports that 57-year-old Anthony Talotta died last week after being found unresponsive in the mental health unit of the Allegheny County Jail  Talotta died at UPMC Mercy, but the cause of death is unknown at this time. This is reported as […]
PENNSYLVANIA STATE・8 HOURS AGO
WTRF- 7News

3-year-old dies after pushed into lake

A 3-year-old boy whose aunt is charged with pushing him into Lake Michigan has died, according to a family source.
CHICAGO, IL・12 HOURS AGO
WTRF- 7News

An 11-year-old might be in timeout after he stole his grandparents’ car. The boy crashed the car into a pole near Broadhead Fording Road and Windgap Avenue, according to KDKA. No one was injured, and the news outlet says no one has been charged at this time. The news outlet also says the boy is […]
PENNSYLVANIA STATE・4 DAYS AGO
WTRF- 7News

BEAVER, W.Va. (AP) — A federal civil rights lawsuit has been filed against a West Virginia jail on behalf of current and former inmates who have described conditions at the facility as inhumane. The complaint filed last week about conditions at Southern Regional Jail in Beaver references a lack of access to water and food, […]
BEAVER, WV・9 HOURS AGO

FAYETTEVILLE, WV (WVNS) — A Georgia man is facing felony charges in Fayette County. On September 22, 2022, 44-year-old Clinton Whitehead of Georgia was brought to a temporary holding cell after being sentenced to 1 to 5 years in prison in the Circuit Court of Fayette County for the offense of Possession with Intent to […]
FAYETTE COUNTY, WV・3 DAYS AGO
WTRF- 7News

WELLS TOWNSHIP, OHIO (WTRF) – The Wells Township Council held an emergency personnel meeting on Thursday night, leading to the immediate suspension of Police Chief John Ingram. This all stems from an incident earlier this month where an officer shot and killed a dog that had reportedly been behaving in a threatening manner toward residents. […]
OHIO STATE・4 DAYS AGO
WTRF- 7News

HEMPFIELD, Penn. — A Pennsylvania man was charged with ethnic intimidation and harassment after allegedly leaving more than 200 obscene and racially-charged voicemails for Congress members, according to our affiliate KDKA. Mark Ray of Hempfield Township in Westmoreland County allegedly left messages for 35 different Congress members. Pennsylvania man hit man in head with baseball […]
3 DAYS AGO
WTRF- 7News

The West Virginia Association for Justice has named Marshall County Circuit Clerk Joe Rucki its 2022 Circuit Clerk of the Year.  Rucki was nominated for the award by Wheeling attorney Clayton Fitzsimmons, who serves on the WVAJ Board of Governors.  Rucki will receive the award on Wednesday, September 28 at 2:00 p.m. at the Marshall […]
MARSHALL COUNTY, WV・7 HOURS AGO

Ohio man gets jail for flying drones over sporting events

CINCINNATI (WCMH) – A Cincinnati man accused of flying into the Bengals’ stadium mid-game is just one of two people facing prison time over illegal drone operations at sporting events. Dailon Dabney, 24, of Cincinnati, illegally flew his drone on Jan. 15 into the stadium. The drone went over players and parts of the stadium […]
CINCINNATI, OH・4 DAYS AGO
WTRF- 7News

Wheeling, W. VA. (WTRF) – As we continue into the first few weeks of Fall we typically experience some cooler weather. From that, it begs the question, when could we experience the first frost across the board? The good news, near term no. But as we venture into October this weekend, that’s when we need […]
OHIO STATE・6 HOURS AGO
WTRF- 7News

If you're a superstar in the making, now might be the chance to get your big break.
CLEVELAND, OH・9 HOURS AGO
WTRF- 7News

Here are the high school football scores in the Ohio Valley of West Virginia and Ohio.
OHIO STATE・3 DAYS AGO
WTRF- 7News

Man ran over ‘Republican’ teen who died after political argument

A man has been charged with vehicular homicide and leaving the scene of an accident after a political argument with a teenager. Fox News says a North Dakota man, Shannon Bandt, 41, hit a teen, 18-year-old Cayler Ellingson, with his vehicle because the teen was threatening him. Bandt allegedly claims the teen called some people, and […]
PUBLIC SAFETY・4 DAYS AGO
WTRF- 7News

Gov. Jim Justice will make two stops in Wheeling Friday. Gov. Justice will be at the Groundbreaking Ceremony for the Wheeling Streetscape Project The approximately $32 million project is a partnership between the WVDOT and the City of Wheeling that will upgrade West Virginia Route 2 on both Main Street and Market Street in the […]
WHEELING, WV・4 DAYS AGO