KOAM News Now provides you with the latest news, weather, sports, live events, and more for Joplin, Pittsburg, and the greater four-states area. 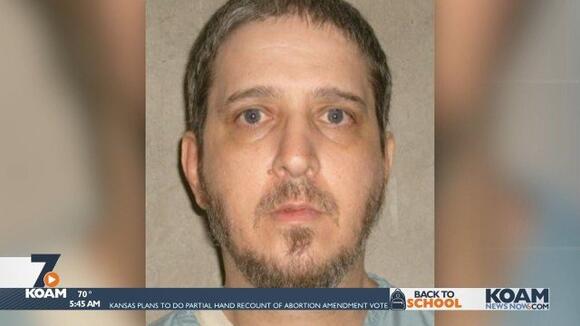 OKLAHOMA CITY, Okla. – Oklahoma Governor Kevin Stitt issued a 60-day stay of execution for death row inmate Richard Glossip. The motel manager was convicted of murder in the 1997 death of his boss. The Republican governor’s office said he issued the stay to let the state court of criminal appeals complete its review of a petition for a new hearing. This is the fourth time glossip has had an execution date stayed or reprieved. He’s been served his last meal three separate times, once when he was “moments away” from being put to death. More than 60 Oklahoma legislators signed a request for an evidentiary hearing into new evidence in the case. Learn more about Richard Glossip here.

JOPLIN, Mo. – A Joplin homeless man pleads guilty to an assault charge related to a stabbing. Authorities say in July of last year 33-year-old Joe Guevara stabbed someone multiple times in Ewert Park. The victim survived. On Tuesday Guevara pled guilty to first degree assault. He is sentenced to 11 years in prison. Read more about this case here.

CANEY, Kan. – Authorities in Caney, Kansas charged an Anderson, Missouri man with several crimes. On Monday officers pulled over a vehicle for equipment violations. They say the driver, 43-year-old Benjamin Valley, was found with a hidden pistol as well as other weapons in the vehicle, one of which was reported stolen from Albuquerque, New Mexico. Police also found drugs. Valley was arrested and charged with possession of stolen property, criminal use of a weapon, possession of a controlled substance, and possession of drug paraphernalia. Follow this story here.

TOPEKA, Kan. – Kansas plans to do a partial hand recount of this month’s decisive vote in favor of abortion rights after abortion opponents charged almost $120,000 to credit cards to cover the cost. The recount had been delayed until those pushing for the recount could provide payment. The request orginally asked for a recount in all 105 of the state’s counties, and was expected to cost $229,000. Abortion opponents decided to recount votes in only nine counties, though those counties account for more than half of the votes cast on August 2nd. However, the recount is highly unlikely to change to results.

SOMETHING TO TALK ABOUT: A Kansas City man is paddling across the Missouri river and painting what he sees along his journey.  Join our KOAM Facebook discussion…answering the question… what do you like to do on the water?  Weigh in on our KOAM InstaPoll too @ koamnewsnow.com/vote .

COPYRIGHT 2022 BY KOAM NEWS NOW. ALL RIGHTS RESERVED. THIS MATERIAL MAY NOT BE PUBLISHED, BROADCAST, REWRITTEN OR REDISTRIBUTED.

CHEROKEE COUNTY, Kan. — A Riverton, Kan. man has plead guilty to various Cherokee County crimes now resulting in a prison term. Adam C. Evans, age 37, was sentenced to 104 months imprisonment. Adam Evans no shoes, cuffed, being walked out of the woods and to a patrol car for arrest Sunday, August 29, 2021. “The roughly eight and a...
CHEROKEE COUNTY, KS・1 DAY AGO
KOAMNewsNow.com | KOAM-TV

GRDA crews head to Florida in anticipation of Hurricane Ian

PRYOR, Okla. — Before dawn Tuesday a group of GRDA employee volunteers met in Pryor for a briefing before embarking on a 950-mile convoy to the Hurricane Ian zone. We’ve received reports of 756,450 outages as of 3PM EST. Our power restoration personnel remain on standby ready to get the lights on as soon as it is safe to do...
PRYOR, OK・4 DAYS AGO

CARTHAGE, Mo. — Hurricane Ian is forecasted to hit Florida late Wednesday. Forecasters say it’s going to be the one storm they never wanted to happen. Possible Category 4. Early Tuesday morning linemen from the Carthage area loaded up to head to Florida so they can respond immediately when the storm weakens. CWEP lineman heading to Florida to assist in...
CARTHAGE, MO・4 DAYS AGO
KOAMNewsNow.com | KOAM-TV

Today, collectors in the Joplin area are gathering at Cecil Floyd Elementary for the 2022 Joplin Collectors Expo.
JOPLIN, MO・14 HOURS AGO
KOAMNewsNow.com | KOAM-TV

Carthage volunteers head to Florida to help with recovery efforts

The Carthage Water & Electric Plant is doing what it can to help our southeastern states in the wake of Hurricane Ian.
CARTHAGE, MO・4 DAYS AGO
KOAMNewsNow.com | KOAM-TV

McDonald County, Mo. — Sheriff Rob Evenson thanks Detectives in his department for their vigilance as Felony charges are filed on a pair chopping down trees illegally and selling them. “Deputies arrested Megan Rios-Kaminski, 42, Anderson and Gavin Lawson, 33, Anderson for the crime of Felony Stealing in connection...
NOEL, MO・2 DAYS AGO

PITTSBURG, Kan. — Plant lovers and researchers have a lot to look forward to at Pitt State. Pitt State hosted an open house for their newly renovated Sperry Herbarium. The herbarium has been on campus since 1946 and has been host to a variety of plants and bryophytes, or liverworts, hornworts, and mosses.
PITTSBURG, KS・1 DAY AGO
KOAMNewsNow.com | KOAM-TV

KOAM's Ty Parks today spoke with local child care experts to see how the 4-States have adapted to child care shortages in the region.
MISSOURI STATE・3 DAYS AGO

Author Sara Dykman today stopped by Pittsburg during her bike route as she travels the migration path of monarch Butterflies.
PITTSBURG, KS・5 DAYS AGO
KOAMNewsNow.com | KOAM-TV

JOPLIN, Mo. — The Jasper County Juvenile Office is using new technology to keep track of teens in the program. RFID is a radio frequency ID that teenagers wear while they’re on the premises. It helps staff members keep track of the amount of time teenagers spend on...
JASPER COUNTY, MO・1 DAY AGO
KOAMNewsNow.com | KOAM-TV

LITTLE ROCK, Ark. — The FBI is offering a reward up to $30,000 for a missing man with connections to Southwest Missouri. Some of the man’s belongings were recovered in Eagle Rock, Mo. in Barry County. “FBI Little Rock is seeking information regarding the disappearance of Jason Lierl. He was last seen in Madison County, Arkansas on January 25, 2022.”...
EAGLE ROCK, MO・8 DAYS AGO
KOAMNewsNow.com | KOAM-TV

KOAM News Now provides you with the latest news, weather, sports, live events, and more for Joplin, Pittsburg, and the greater four-states area.